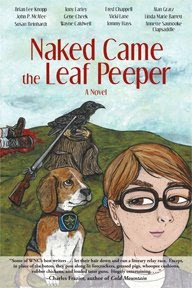 "People are dying in mysterious ways around Asheville.  Men once linked to a land deal are now dropping faster than the fall foliage. Assassin-for-hire Garnell Lee Ray has one last target in her sights--but not if detective J.D. Klontz can put all the pieces together first.  He soon discovers that everyone is hiding something—or somebody—and all hell and hilarity will break loose before he finds out the truth.
"A zany Southern Appalachian take on The Girl with the Dragon Tattoo, Naked Came the Leaf  Peeper  is a serial collaborative novel representing the collective wit and genius of twelve western North Carolina authors." (from the back cover) 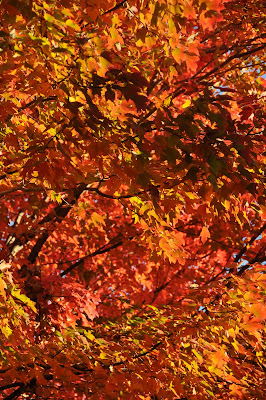 This group effort was conceived in celebration of the thirtieth anniversary of Malaprop's, Asheville's outstanding independent bookstore.  I was honored and delighted to be asked to participate in this challenging exercise in novel writing by committee.

This is how it worked: After the first chapter was written, it was sent to the author who'd drawn Chapter 2. That author had two weeks to complete his/her chapter and then it was sent to author number three. And so on.  We writers were kept in the dark as to who had written the chapters before ours.


I drew chapter four. What fun it was to pick up the characters and plot lines that had been laid down and expand on them -- or give them a slap and send them off in another direction!

The final result is a wild, irreverent ride through Asheville and western North Carolina. (My chapter is set in Marshall and Sodom Laurel.)  It's great fun to see some serious 'literary' authors let down their hair to write a far-fetched thriller. And the final chapter by Tony Earley is a kaleidoscope of hilarious action that resolves the many threads of this multi-parented story in fine Shakespearean style.


The novel will be on the shelves at Malaprop's very soon. But it's available for pre-order HERE. 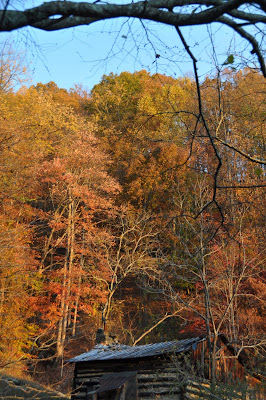 That must have been a little different, to pick up on characters and a storyline you didn't give (mental) birth to, or have any preconceived notions about.

It must have been so much fun to write and to read once the book completed! But a challenge too for the responsibility of being part of this project.

that is an awesome concept for a book...there is a book like that that Lee CHild and a couple others did called Watchlist...this sounds like a fun book...and i went to that bookstore when i was there last...

What fun. Can't wait to read it. Are the various authors given in the table of contents, so we can grin at which one does what?

It was great fun -- and yes, the authors are each credited (blamed?)for their own particular chapter.

It does sound like great fun; I'll have to order a copy. We were discussing a similar project here in Rugby a couple of years ago, but it never got off the ground. Maybe this will revive it. Jim

That is insane! The concept made me think of the childhood game where you would whisper something in the first person's ear and they pass it on, and on, and on until it gets to the last person. The end result was always hilarious.

I can't wait to read it.

Sounds a brilliant idea.
I wonder if it would work with a selected group of bloggers?

Oh that does sound like fun! I'll definitely have to look for this one!

I'm giggling already so guess I will have to order this one! LOL I've only read the collaborative Naked Came the Phoenix, which was great fun, so will have to look up the other Nakeds. :-)

That sounds like a hoot, Vicki! I'll definitely have to look for that at our library. Thank you for reminding me of Tony Earley. I love his short stories. His book Here We Are in Paridise is one of my favorite short story books ever. Wonderful stuff.

Happy New Year to you and to those you love!

That sounds fun, if difficult to do. We used to play games like that where you wrote a sentence and passed the folded paper on. I used to adore them when I was a kid, so funny. Neat way of celebrating an anniversary though.

Can't wait! You know how I love our talented NC writers, especially the ones who write about the mountains.