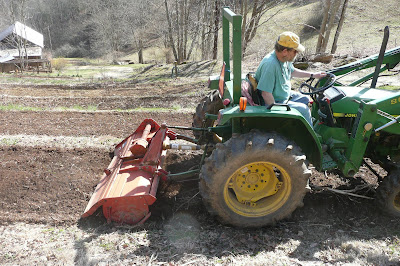 Q: Do you or your husband have any advice for other husbands and/or their author-wives, on how to live with a novelist or --perhaps more important--a budding novelist?
A: This is a hard one as, I suspect, every relationship is going to be different. Certainly a supportive spouse is an asset --  but the type of support desired or offered is probably going to be different in every case.
When I  began working on my first novel, I fitted my writing in around my ordinary schedule-- usually working late at night. It was my aim not to let this new and untested obsession interfere with my normal day-to-day life. The only support I needed at this point was to be more or less ignored. I didn't actually want to be asked how things were going -- especially if they weren't going well.
I had a small critique group reading my work in progress, chapter by chapter. I sought advice from my husband on various technical aspects (guns, cars, sailing) that I was using in my book but never asked him to read it as I was pretty sure it wouldn't be his cup of tea.


Once I was under contract and writing to meet a deadline, John began taking over bits of my day to day work on the farm and in the house, freeing up several hours in my day. He is now the bread maker; he makes pizza on Monday nights; he has taken over the twice-daily visit to the chicken house.  All this is in addition to the myriad other things he does on the farm. That's supportive! 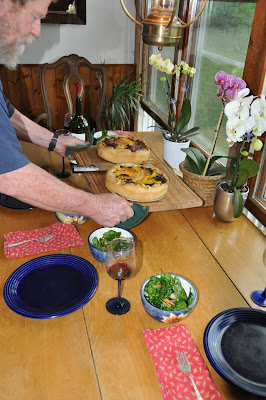 Does yours listen to you read your produce aloud?  Do you dare let him hear you?!  Does he read your books-in-the-works? Offer comments?

No, no, no, and no.  John reads (and says he enjoys) my books once they're in print. But he's not the audience I'm writing for. He's not a fan of woo -woo -- the paranormal elements that continue to slip into my books; indeed, he's not a fan of mysteries -- he reads mainly non-fiction.

In working on one book I did read a bit to him to check if it sounded sufficiently 'guy-like.' And I always check with him when I bring guns into the story as he's quite knowledgeable on the subject. But now that I've been with the same editor for six books, no one reads the manuscripts before she does. It's Herself I'm trying to please. 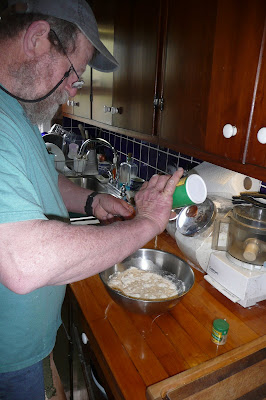 Does he understand when you are having conversations when it appears there's nobody around (except your character with whom you are having a discussion)?

Well, I don't actually do this. I do tend sometimes to stare into space at the dinner table and not always respond to questions because I'm working out a plot point.

As I said, everyone is different. Some writers like for their spouses to be an active partner -- accompanying them to events, proofreading their work, setting up events, handling publicity. That wouldn't work for us -- John has a farm to deal with. And even if he didn't, trundling round after me to book fairs and libraries and bookstores to hear me do the same presentation again and again. . . well, that would get pretty boring for him.

I deeply appreciate all John does to allow me more time to write. And even more, I appreciate his not asking why I can't get advances like Janet Evanovich. 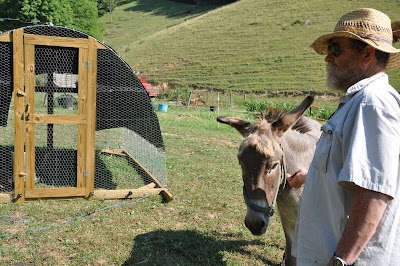 I am truly blessed to have one of those supportive spouses, who can do it all! I call him my "Boy Scout". He's always prepared, and he's always supportive. I recently started my on-line shop and have had a blog for a few years now. He even supported me leaving corporate America to pursue my dreams of owning a business and writing. Gotta love these husbands!

Said it before, I'll say it again...John is a gem!

I'm lucky to have a supportive husband, too. He built a studio for me and is willing to make dinner for himself and me (when he's here) if I'm so caught up in whatever it is I'm painting I forget the real world exists.

But he doesn't know how to make pizza or bake bread. Ah well...can't have everything.

Well, look on the bright side regarding Janet Evanovich. You may not get her advance, but you also aren't called the "Sarah Palin of Letters" by Sam Tanenhaus.

This is a familiar tale, Vicki. I can only echo my deep appreciation, with regards to how Mags has always supported me in my efforts. Years of trying to cut it as a writer and those slightly surreal years in between, when I had my head stuck in academia. Lucky for me, I managed to get released before too much damage was done!

Mags loves to read and I love to write. A healthy combination that obviously works, for us. We do have a life besides, though. Just in case you were wondering.

Two thumbs up for John .. he's a great guy helping out when needed and then some!

Since retirement my husband and I work well together, doing this/that and exchanging roles when needed. It sure makes life much more pleasant.

smiles on that last line...thanks for the glimpse inside...sounds like you have worked it out nicely...

In a world where good men are hard to find, one like John is a real treasure! I found a treasure too! :)

Loved the insight of your writing habits!

A fascinating insight Vicki. Looks like both of you are lucky.

Another interesting peek into the life of a writer!

That is so interesting. I am starting my first Elizabeth Merriweather book. I'm sure I will be devouring the series. At last count, I have read about 35 books this summer. I have two more weeks to read whatever I want before I start back to school.

Sounds to me like your marriage is a two-way street of understanding which leads to being supportive of each other. -- barbara

Great post! Yes my husband was supportive when I was studying for my English exams to become an English teacher. He made coffee and tea, drove me to school. I still cooked dinner but he did the shopping. He was always there when I came home at ten o'clock in the evening after teaching.

Hurrah for all the supportive spouses/partners out there! Whether it's helping out with the cooking or just being patient with an obsessed housemate, may they all be rewarded for their patience!

I do bounce ideas off my other halves and they have been very supportive thus far. However, I think I know when enough is enough. One likes sci fi and the other history and for me it has to be mystery. Perhaps I could combine the three one day and get a different result. Your other half looks like a very excellent cook and handyman so you can get comfy in your favourite writing chair and get on with it. Aren't we lucky.
Blessings, Star

We are lucky, indeed, Star! Perhaps a steam-punk mystery would draw on the interests of the three of you.

So good to read that your husband is so supportive of your work, kudos to him!