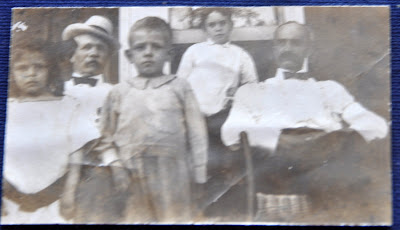 Tampa, Florida -- the early 1900's. An early autumn afternoon and C.L Knight, the family patriarch, and his sons and grandchildren are taking their ease on the front porch  while the women of the family are inside -- resting after the exertions of Sunday dinner.
The house is located in what is now downtown Tampa and many a fashionable couple is out strolling, parading in their Sunday finery.  The Knights smile and nod and comment privately on their passing neighbors.
A newly-wed couple, arrayed in particular splendor, approaches and the men lean forward with special interest for the blushing bride was, before her marriage, one of the ladies of pleasure in a well-known brothel. All three men grin and nod to the couple who acknowledge the greeting and continue on.
"Well, boys," says the patriarch to his sons, as he leans back in his rocking chair and watches the shapely bride out of sight, "there goes a mighty fine piece -- and we all know because we've all had some of it."


A sound -- a muffled word . . . an intake of breath -- behind them and the men turn to see Mrs. C.L. standing there just inside the screen door with a face like doom.
The family story -- as told by C.L.'s grandson, Charles Lafayette Knight II -- says that C.L. took one look at his wife and set off for his hunting camp in the Everglades where he stayed till just before Christmas, returning laden with gifts for everyone.
That's just one of the stories Uncle Charley told. Another was how when C.L. the first died  (much later and of natural causes -- nothing to do with his wife)-- Seminoles from the Everglades  appeared the next day in Tampa and camped in the yard for three days, singing songs to help their friend's spirit on its way.
My husband's family is full of story tellers -- and they all adhere to that fine old Southern tradition of never letting the facts get in the way of a good story.
For more Sepia Saturday posts from hither and yon, go HERE.

This is a great tale, Vicki. No wonder C.L. took off, after his remarks. It would have been pretty chilly at home, I imagine.

My grandfather told wonderful stories, and we do our best to keep them alive and well.

quite the tale vicki...i think i might have been a bit less restrained...so cool about the seminoles...bet that was a sight...i love storytelling...

What a great story. Wouldn't it be funny if C.L. was just trying to impress the guys and hadn't been with the woman at all?

Ha! That was great. Love the photo.

those were the days!

my ex's great grandfather was JAJ Henderson also known in Tampa and south Georgia around the same time. Maybe they had all known that particular bride, ~wink~

You are such a good storyteller Vicki. I enjoy the irony of the story. Thank you for sharing your talent with us.

i gave you one of my weekly awards, come over to collect it anytime you can!

Yike - great story, Vicki. Interesting if just a fistful of possums could really erase that rather major faux pas!

Well done on your Goddess Award, it's a great story!

Vicki, I feel as if I should pay you for this one...I enjoyed it so much!
and the only other comment I wish to make is...men!#!

How fun to have a family of good story tellers. Congrats on your POTW.

What a great story! I got chills envisioning the Seminoles chanting his spirit across.

Great stories. The first one really had me laughing. The image of the Seminoles in the front yard singing is quite touching.

Uncle Charley was writing some of the stories down, Martin, but alas, he was gone before he finished.

I think story telling must be one of the oldest of the arts, Brian.

Deanna -- the photo isn't actually of the Knights but of the men of another side of the family. But it just seemed to fit.

Goddess - many thanks for the POTW award! As a matter of fact, CL Knight's daughter Lois married a Joe Henderson and they had a son -- named CL Henderson --- my husband's second cousin. Could be related to your ex!

I have a real feeling, sEAN, that jewelry was involved, not possums.

Mel -- CL had a lot of friends in the tribe -- and his grandson, our Uncle Charley, did too. Charley served as Commissioner of Indian Affairs in Florida at one time.

Ha ha ha! that was some story. I love the old stories, they get more fantastic with each telling...or do they. Very interesting.
Blessings, Star

What a great story...two great stories! I wish I had a story teller in my family. I can only think of a very few family stories. Maybe I'm not trying hard enough. Maybe I didn't listen hard enough!!! Of course your talented writing is what makes the stories come alive.
Barbara

Loved it, loved it, as usual. That is a fine photo. You are indeed a fine story teller. My daughters get upset sometimes when I tell my grands stories. They made me promise never to lie about true stories. LOL
QMM

Really, just so well told. I enjoyed this thoroughly. The picture, which only revealed itself to me after I'd read the story (slow internet here in the mountains) was a wonderful counterpoint.

I just love that fine old southern tradition, "Never let the facts get in the way of a good story". A godd story this was too, I could picture the Mrs. behind the screen door, with that look all men fear. The gaze of death and doom to all it bears down upon.

I'll bet he was more careful with his statements in the future, LOL.

To me, this story has a real ring of authenticity, Star -- I never knew CL but his son was my husband's grandfather and he was a real rip-snorter.

Barbara and QMM -- I think my writing comes from having heard so many good stories.

Thank you, Leah -- mountains? I thought you were in Brooklyn.

History does not relate the answer to that, Eric.

Wow, what a wonderful photo and a colourful story. How marvellous to have such great family stories, it makes my stories very tame ;-)
Thank you so much for visiting my blog and your comments, we are so lucky to have had wonderful grandmothers.

I suppose we all have stories in our families but your stories are so singular and you tell them so well. And a fine Sepia Saturday photograph to set the process under way.

Love the photo-and of course I Love the story : ) I'm going to share it with my husband-sounds like it came from his family.

I came via The Everyday goddess. Congratulations on receiving her POTW award.

I love this. Colorful family stories are very worth preserving, and this one was delightful.

This picture indeed was enhanced by ever so many words in the tale. Great story, especially his banishing himself to the camp until Christmas. It's wonderful to have a legacy of tales....

funny anecdote for sure, but i would have exhumed the body to have a full forensic expertise done. natural causes, you say?!? Hum...
:D~
HUGZ

What a story! Did you hear how C.L.'s wife responded to his return at Christmas laden with gifts? Story teller genes must run in families. (And I don't think mine got many.)