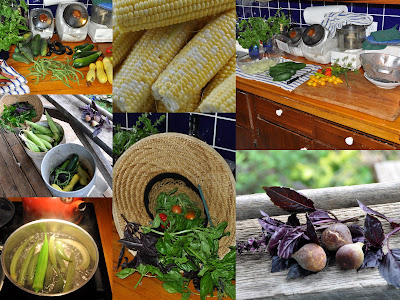 Two of my blogging friends mentioned, in connection with my August 1 post on the threshing machine, that it was just right for Lammas  -- which fell on August 1.
Lammas celebrates the early harvest and the first harvest of wheat -- indeed, the name Lammas derives from words meaning 'loaf mass' and the first grain harvested was ground into flour,  baked into bread, and that loaf was blessed by a priest.
Long before Christianity, the early harvest was celebrated in England as Lughnasadh) and followers of Wicca and other earth religions have made this a part of their rituals. 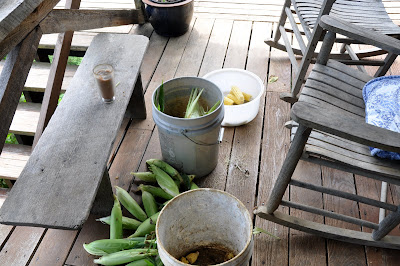 Harvest is always worthy of celebration. I've spent much of Monday and Tuesday dealing with some of the garden's bounty-- okra, squash, eggplant, beans, tomatoes, potatoes, cucumbers, figs (only a few, alas, but there are more ripening.)
But it's been mostly corn -- shucking, removing the tip and its (almost always) resident worm. The worms and tips got taken down to the broiler chicks who, according to John, had a fine time eating the corn off the wormy tips -- and the worms as well. 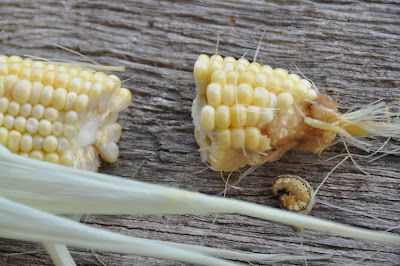 Next the corn is blanched in a big pot of boiling water for about ten minutes, plunged into ice water to cool it, then cut off the cob and put into bags to go into the freezer.
Corn chowder, corn pudding, and Sam's corn cakes will be on the menu in the coming months. 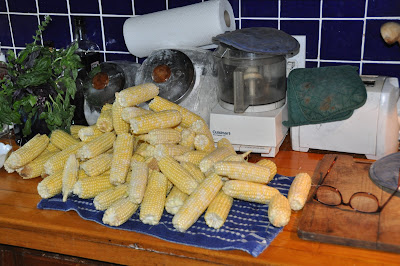 I did that about two weeks ago. The sweet corn here in western NY is ready and willing!!

Looks lovely, and makes me ready to go farmer's market hopping. Do you know of a market/vendor around here that carries fresh figs? I crave them. :)

Lammas! I'd never heard of that one. Always so interesting to learn about the old festivals - they tell you so much about how people lived and what their priorities were.

Pretty mosaic! I wish so much that I could grow veggies up here, but the growing season is just too short and 'iffy' for that. But fortunately, my sister who lives in Redlands grows tomatoes, corn, zucchini and peppers and, even more fortunately, she shares! :)

Well Vicki, you've done it again. A really interesting post, and an introduction to Lughnasadh, which I knew nothing about. This is certainly a busy time for you but, so rewarding to be harvesting the bounty.

and such a beautiful sunny colour - just right to honour the Sun King as he stands at the height of his powers. Congratulations on your abundant harvest.
Blessings, Star

intersting bit about th lammas...but the corn, i love the corn...esp white corn....

What a lot of work! I'm impressed! Glad there's a good use for the corn tips and the worms. Love to recycle and reuse.

Rick -- oh, yes, I ate several right there in the corn patch. And I made a salad with raw corn and black beans, onions, tomatoes and peppers.

Hurrah for your sister, Victoria!

Martin -- I think there was a film not long ago --Dancing at Lughnasadh.

Thanks for giving me the idea for the post, Star!

Brian -- my favorite is the two-tone yellow and white variety but some years we grow Silver Queen and it's right fine, indeed!

Tell me one thing you don't do! Lady where do you find the time?????

Dear Vicki, I love so much seing a writer having such fun in harvesting... You have changed my idea of writers.... you are soooooo lovely!!!!
maria cecilia

I noticed the glasses on the counter beside the corn. Probably better we don't see any lingering worms and consider them a small addition to protein complement.

I'm into tomatoes today! Corn has a way to go, here...

Loved the Lammas explanation. Thanks much, Vicki!

Elizabeth -- there are so many things I don't do (knitting, making music, bowling, playing bridge spring to mind)-- and those I do are often woefully slip-shod. C'est la vie.

Ah, Maria Cecilia -- there are all kinds of writers!

Which is why, Elora, I never serve my frozen broccoli to company -- unless it's pureed into soup.

What a great bounty your garden has produced. I know a garden is work, but yours is gorgeous and well worth the effort. You'll enjoy the corn throughout the year.

Glad you enjoy my corn cakes. They are one of our favorites too.
Sam

I am so envious of your corn! We gave up on trying to grow it long ago. The coons and deer and who knows what else always get it before we can.

And figs? You really have fresh figs! Oh.my.gosh. Hubby would be in heaven.

The Lammas and old festival history was interesting.

How interesting !I'd never heard of this pagan feast!

Putting up corn is a chore-but my is it worth it come winter.