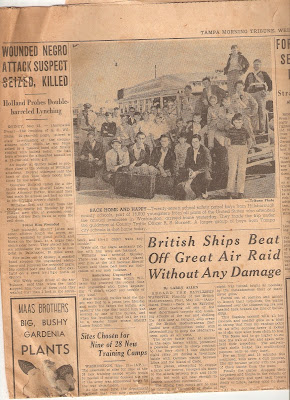 In May of 1941, the citizens of the US were still trying to believe they could stay out of the European war.  They were buying big bushy gardenia plants and safety patrol boys were taking trips. And there were lynchings.

My parents were on their honeymoon, in a roadside diner when they heard the news about Pearl Harbor.  Soon my father was in the Army and my mother, saying goodbye to Tampa, Florida, was following him from post to post in the western states -- Reno, Nevada, La Quinta  and Indio in California. (My birth in California can be considered a military accident.) 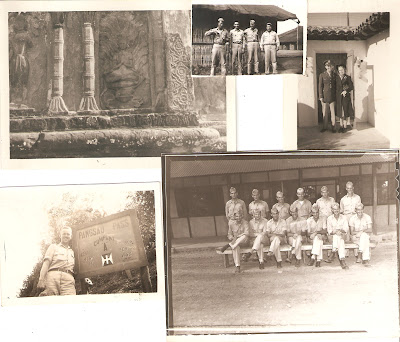 And then my father went overseas -- to stand at Pangsau Pass, one foot in Burma, the other in India, he wrote on the back of the snapshot. My mother and I returned to Florida to await his return. I remember none of this, of course, but these old newspapers and pictures conjure up that time.

And I wonder if the people back in May of '41, buying those big, bushy gardenias and new bandeaus by Helene of Hollywood, the people reading about dry rot in Germany, had any notion of what lay ahead and how their world was about to change.


And I wonder what lies ahead for us -- what radical changes may be just around the corner that we, busy with life as usual, don't anticipate. 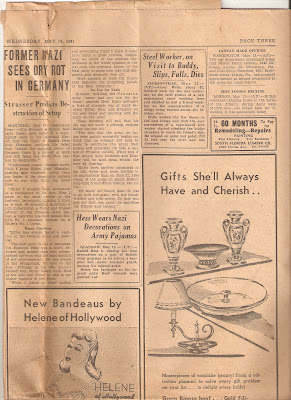 I was born in 1941 and I suspect that people tried to live their lives much as usual until their lives were directly impacted by the war. People try to make the best of things until they can't.

Congratulations on your book publication.

Oh the headlines on the paper are wonderful! I especially love "Steel Worker, on Visit to Buddy, Slips, Falls, Dies." Okay, that and Hess wearing decorations on his pajamas. But the best line is "Below the bandages on his inured ankle Hess' toenails were painted red.

Are we sure those are Willows toes in this weeks Magpie?

I thoroughly enjoyed reading the newspapers, felt so sad to read how that black man was treated and found Hess's description a bit amusing, red toe nail polish suggest many things, just reading about the flowers, lumber and everyday news was so enjoyable. I wish my parents had thought to save some newspapers from that era, but they probably couldn't have afforded them. Thank you Vicki for sharing this....:-)Hugs

Wonderful newspaper articles of the time. I love how they provide a snapshot of life in the way no other medium can.

Well done to one who manged to keep those newspapers for posterity! Unlikey to happen now, when re-cycling is the name of the game...

interesting to read about those moments leading up to the war...sometimes they get lost in its shadow and perhaps they are just as important...

"They were buying big bushy gardenia plants and safety patrol boys were taking trips. "
This sentences describes very well how the ordinary lifes were threatened...

I suspect that Callie is right. We tend not to pay attention to things, until they affect us. And, it was a much bigger world back then. The places that were soon to become so familiar to them was just exotic names, far away.

Ah, yes, Vicki...your last paragraph is particularly poignant. It's as if we are all standing astride an ever-widening chasm, contemplating the possibility that an earthquake will manifest itself, needing to make decisions soon about which side of the chasm to ride...Such was then (1941) and such is fast-approaching, now...Compelling news clippings...and definitely food for thought.

I, too, love the glimpse of ordinary life in the other stories. And Hess's red toenails -- who knew?

A good reason to save the whole page rather than just the clipping. These pages were saved because of a story about a wedding of friends -- not because of anything else.

My parents often talked about where they were and what they were doing when Pearl Harbor was attacked. I don't believe the average American had any idea what was in store. I have such fear for our future that what lies around the corner can't be much worse than my fears.

The article about the shooting really drew my attention. So many references to the race of the different people involved.

I really appreciate your insight to our country and the world around us. We do tend to get involved with our possessions and way of life while the world continues to hover in on us. My dad went into the army the next year also and yes had one army accidental baby on a furlough. My second oldest brother. I liked reading your blog.

Life goes on until it doesn't.
It is only hindsight that changes our view of the times we live through.

I love old newpapers--started my 'historical papers' collection with the JFK assassination when I was in HS and have a paper from many major events since. I love going back to papers from before my time, but it's also interesting to look back on those from earlier days in my life-what were doing, thinking, buying, wearing?

NCMountain woman -- I noticed that too.

Larry - I was struck by the thought of all the simple country boys that suddenly found themselves in countries they'd maybe never even heard of.

Friko - I have letters from the early Forties, written to my grandmother by my mother who was following my father from base to base and you'd never know there was a war on.

Lynne -Old newspapers are one of my favorite research sources. I go to the library and get the microfiched copies of the time about which I'm writing and read them thoroughly -- ads, society section, news, classified -- anything to give me a handle on the era.

Oh yes, the red toenails, the careful noting of racial details, that headline about the steelworker tragedy, the hair and makeup(!!!) in the bandeau ad . . . a trip back in time.
The "gifts she'll always have and cherish" pretty much made me cringe. Except for the lamp.

Very interesting reports Vicki. We fought a very brave war but we are all extremely grateful that America joined in, albeit a bit late. Where would we have been without you guys and your invaluable help!
Blessings, Star

So many interesting articles in that paper and I find myself wanting to know more about Hesse's red toenails. What's wrong with me?

I love reading old newspapers. Usually I have to look at them on microfilm at the historical society.

Your thought about what's coming next... most of us don't give a thought about it but it's often on my mind. How to prepare for an unknown future....

The Brits were amazing, Star! The Battle of Britain. . . Dunkirk . . .I love the English novels of the time. Elizabeth's Goudge's CASTLE ON THE HILL is one of my favorites.

Nothing's wrong with you, Barbara! Inquiring minds want to know...

I loved seeing the old newspapers, so interesting to see the content of those days. many of the old newspapers in NZ are readable online and are wonderful to view ...plus i have found so much on my own family lines in them. Your photos are great too.

Your words and your images are perfectly matched : a collection bringing together different places, different times. And both ask questions. Love it.

Funny what comes to mind..I was born in 1944 in NZ and my mother used to tell me how she left me in the backseat of the car asleep while she popped into a shop (I think my father may still have been in the car) and when she returned there was a handsome young American soldier sitting in the back seat nursing me..
saying "I just want to hear her holler". I loved to hear that story. The American soldiers came to NZ during the war for R&R I think, from the pacific.

Hello, New Zealand! I'm going to have to look at some of those old NZ newspapers on line.

And I love the story of the GI and the baby!

Bushy gardenia plants must have been in thr south, had not heard of patrol boys either, but it does capture how unaware the world was for what was to happen. Perhaps it's better not to know? I recently gave a stack of old 1941-45 newspapers to my uncle's grandson as he is interested in history. It was a different time.

Vicki,
It is very insightful of you to look at these events in the context of the mundane. I also often wonder what is around the corner for us. Sometimes I'd rather go buy some potted plants and not think about it.

Something to think about for sure. Sometimes I think about how getting news from loved ones then-was so much harder than it would be now. Back in a time when letters were the main form used-and it could take weeks or months for them to arrive-as loved ones waited for just a word or two to calm their fears.