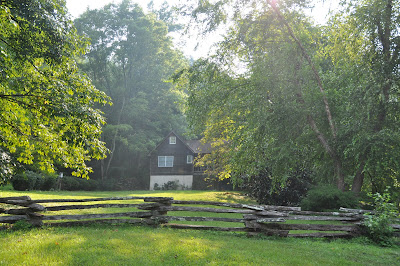 There are three houses on our farm: the Blue House that was there when we bought the place, our house, which John built, and the Gran House, which John's mother had built so that she could be cared for by family in her latter years.
We've had a variety of tenants in the two extra houses -- friends and family sometimes, and other times just whoever showed up. Mostly the experiences have been good and the tenants have become friends. Occasionally we've had a surprise, like the charming young couple who, when they moved, left a veritable mountain of trash in the basement.
For years now, the tenants of the two rent houses have been our sons and their significant others. It's been great. But now that the older son and his wife have been forced to move to Atlanta to keep their jobs, we're once again looking for tenants. . . and wondering what they'll be like. 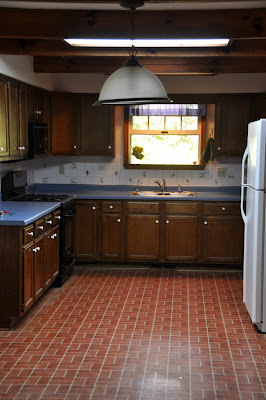 John has repainted the interior and done lots of sprucing up.  I've made some curtains and was down there yesterday doing a little last minute tidying. As I wiped the cupboard doors with cleaner, I realized what a huge number of cabinets there are. And counter space. About five times as much as in my kitchen. Hmmm. 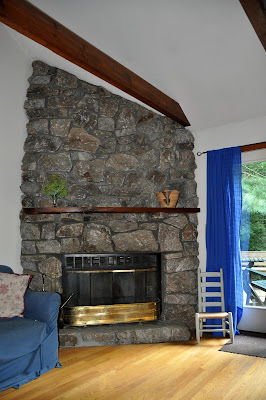 There's lots to like about this house -- including the A/C which we also don't have. But its view isn't near as good as ours... 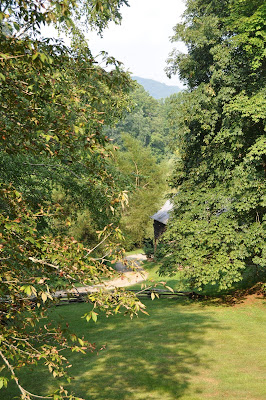 My younger son told me to post an ad on craigslist and it got two responses almost at once. And then another. Who will be our new neighbors?
I'll have to remember to tell them that every Easter, the front yard of the Gran House becomes the site of a major Easter Egg hunt. That's not negotiable. 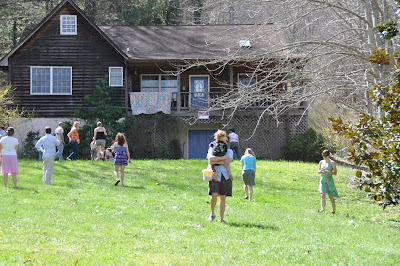 Looks like a great place to settle, it does. No problems with the egg hunt ;)

And I've never left anything behind...I'm no neat freak but a place is clean when I leave( or even cleaner ), as when I move in :)

I hope you get really good tenants this time, Vicki. That's a really pretty house and I would think that the Easter egg hunts would just add to the charm!

Looks just ideal, Vicki. If we lived stateside, you could expect us to come knocking at your door! Fingers crossed, you get the nice neighbours you deserve.

how cozy!!! really a great place to move in! good luck for lovable tenants! I love the fence on the first pic, is it timber between piles of stones? eliane

What a lovely home that is .. that huge kitchen, the stone fireplace, those beams ... WOW! Hope you find some good renters ... I'd say that would be quite a find in Madison Co.

ha. the easter egg hunt looks really cool...it looks a charming place...esp that fireplace....hope who ever takes it respects it...

I wish I could live there!

There was a phone call last night from a gut who only wanted to know it there was a basement. And water. I asked what size family he had and he hesitated then said it was just him and his wife. I'm suspicious. Sounds to me like someone looking for a place to set up a meth lab. I did say it was secluded...

Eliane - the fence is just split rails stacked on themselves -- like interweaving your fingers.

Carol -- we have rented it out weekly before but it's a lot more work -- we're hoping for a nice long term rental.

Alas, no Perseids last night -- it rained around nine and the sky stayed overcast -- I woke up and checked several times.

Jeez -- when will I learn to proof read my comments? A phone call from a GUY who only wanted to know IF...

Lovely home! I had no idea you had three houses on your farm. I hope you get some wonderful renters. It's always fretful when we get new neighbors around here, as it seems we get rather bizarre ones. We always say, maybe some nicer older (normal) couple will move in, but it never happens. The latest one has a goat that runs loose (right on the main highway) since it got away from her a month or more ago,...plus now she is cutting trees on land that doesn't belong to her and etc etc...always some drama. Anyway--good luck---and gut or guy all the same if it is some meth maker. That would be horrible.
Tammy

We have been "landlords." (Home-lords?) Every new renter presents a new adventure--sometimes good, sometimes not so good. A mix of trepidation and hope colors the process of finding someone. Here's HOPING you discover an ideal renter "family." With foreclosures afflicting so many, it would seem you could have your choice of GOOD renters who would be so glad to have an opportunity to enjoy the lovely premises. Best of luck! I know the feeling well.

I'd love to live in Grans House and enjoy all of your wonderful views. I hope you get some really good tenants.

I so envy the part of the country where you live. It is one of my favorite places to visit.

Have a wonderful Thursday.

I love all the houses. I'm sure you will find just the right tenants, although the screening process must be a pain. Good luck.

wow three houses on poece of land...sounds like a setting for a good mystery

I would be ever so careful about the guy who asked about the basement too. As you well know, meth lab folks love our mountains. It's a huge problem around Boone - people are even setting them up in motel rooms now. Scary!

It looks idyllic - hope you get some great tenants who will almost become part of the family... certainly help you with the egg hunt!

WV is 'incows' - wonder if there is wisdom in that? Inlaws...incows? Maybe you're looking for farming types?

Just had a call from someone who sounds PERFECT -- but can't come out to see the house till Saturday. Keeping my fingers crossed.

A family complex! Now isn't there a family mamber that would like that lovely house? -- barbara

It looks heavenly and the Easter Egg Hunt makes it sound even nicer ! You should find a tenant very quickly .

K. I'm packing the trailer. Be there this weekend!

The Gran House has been the home of my mother-in-law and later my sister-in-law, and till recently our older son and his wife. Just at the moment all famly members are where thhey need to be -- which is why we're looking for tenants.

Rick! Come on down!

One of my other blog friends had hoped to rent this house back when it first became available but they're still waiting for their own house to sell . . . of all sad words . . . 'it might have been.'

How much is the rent?

Looks like a nice place-I'm sure you won't have any trouble filling it. Getting new renters is sorta like an adventure for you I guess : )

Too bad your house in not in California!
Read at Writersporch about your new book: congrats!

Did you notice the expression"C'est le pied "on the poscard "Sarlat" ?

The adventure continues -- the people who seem perfect can't give me a definite answer till her daughter sees it -- and someone else is coming to look tomorrow.

Miss Yves -- I did and guessed that it probably meant something other than "It's the foot." but what, i don't know.

The adventure continues -- the people who seem perfect can't give me a definite answer till her daughter sees it -- and someone else is coming to look tomorrow.

Miss Yves -- I did and guessed that it probably meant something other than "It's the foot." but what, i don't know.

I love the view here! I'd rent!