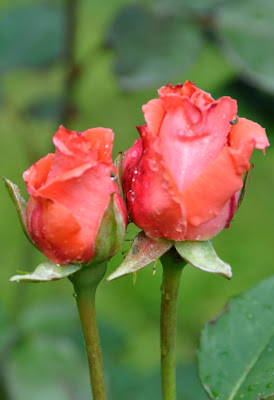 Monday and Tuesday were a blur of garden activity. I finished planting the little box garden below. . . 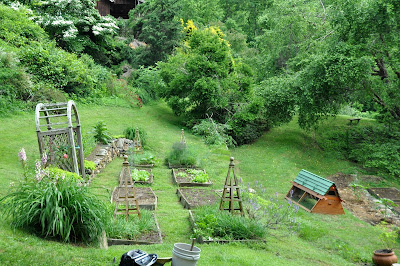 And, with John's help, the lower bit of garden was finished -- corn, beans, more lettuce, beets, and nasturtiums sowed, tomatoes, squash, and cucumbers set out -- whew! That orange stuff along two of the tiers is plastic netting to deter the crows from pulling up the corn when it sprouts. 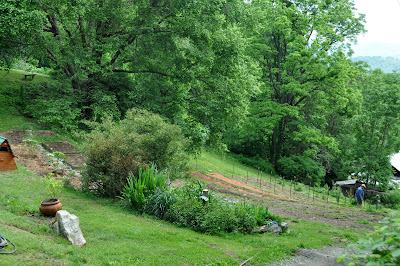 John is my hero. Not only did he put out soaker hose for the tomatoes, the blueberries, and the raspberries -- he also mulched them all.  This, after making scones for breakfast and pizza the night before.  Is that a great fella or what? 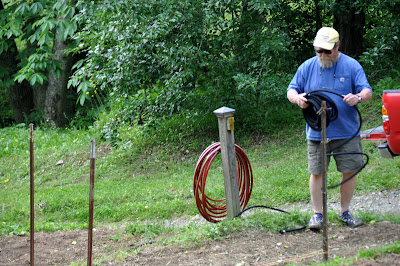 For one brief shining moment, the garden is in good shape -- now I can turn my attention to the rest of the yard -- which is in need of major tidying. 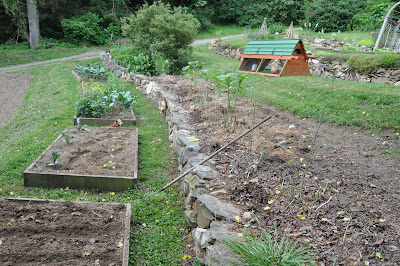 But there's always time to enjoy the flowers . . .

So satisfying, isn't it, Vicki? I cleared an area of garden for our daughter yesterday. Afterwards, it was great to sit back with a cool drink and watch the birds picking over the newly turned soil.

That's a wonderful partnership you've got there. Scones and pizza eh, John? Good man. I must let you have my recipes for fruit cake and focaccia bread!

Beautiful garden! Love the rock retaining wall. The orange stuff is a great idea. Sounds like John deserves a medal!

Oh, it's so beautiful, green and lush where you are! I'm itching to get into my garden, but winter keeps shoving spring out of the way.

And John is an absolute gem!

You definitely put in some serious garden time, and whatta guy John is, helping out like that! Two thumbs up for him!!

They keep promising rain over here and it simply isn't happening, so hoses/soaker hose will be coming out today.

fun fun...love fresh fruit as well...esp blueberries...sounds like you are having fun the garden...it peaceful for us...

I always wanted to know how it feels having planted a garden like yours. You must have been tired to the bone, same as John, but what you created with your own hands is amazing!

It seems you have the same sort of weather as we have here, April in May, rain showers and sunshine changing several times a day. I can see the weeds creeping up ... oopsie ... let's forget about them for a few days!

Your mentioning John's scones make my mouth water! A little study break? Or more of that oh so healthy whole grain spelt bread with farmer's cheese and Italian herbs? ;-)

I wanted to mention how much I enjoyed the May Flowers slide show! For some reason I have extreme difficulty getting close-ups in focus. Sometimes I try and try, then give up.

Your garden beds are beautiful!

Don't you love it when men work for food! ha.

Your place is so idyllic! Did you say scones? I need one about now with my second cup of tea!

Oh, and by the way, have I mentioned the song "Penny Lane" plays in my head every time I visit your blog?

You have such a beautiful place, Vicki. I love how you garden 'with the lay of the land'. I know it's a necessity in hilly country, but the way you all have it laid out is charming. It is hard to stay ahead of the yards/gardens this time of the year. Mine is still raggedy looking, but I'm working on it! Last night when I mowed the grass, it was so thick (and still wet) it kept choking out the mower!
Tammy

What a beautiful place you have there.

I'm glad you have time now to stop and smell the roses for at least a bit.

Maybe it is the J that makes a guy great? John? Jim (my hero). Nah, we just have great guys.

You can't underestimate the value of soaker hoses. Nor of a wonderful partner who will install them. And cook for you yet!

I do envy your lovely garden and its bounty. We have no room for a garden but thank goodness we have a little summer fruit/veggie market.

Beautiful!!!!!
How lush and green everything is!

Martin -- Send those recipes this way! One of us will give them a try!

Callie -- The rock walls are courtesy of my talented younger son and his mentor -- a long time family friend.

Oh, he is, indeed, Victoria and Miss Yves!

Now if it will just rain, Pat. I watered yesterday and there are clouds everywhere but so far nada.

Definitely peaceful, Brian -- a joy to play in the dirt!

It's been beautiful weather, Merisi -- getting hotter but still gorgeous. And tired to the bone is an understatement.

The scones had dried cranberries and dried apricot bits in them -- really delicious and so rich they needed no embellishment. But your whole grain bread sounds pretty terrific!

Re close ups -- I have the same difficulty -- mainly because I'm almost always in a hurry -- grabbing a picture on my way to do something else. I just keep taking and trying and editing!

Betsy -- in this case, it was John who made the food in question! As I said, he's quite a fella!

It's a never-ending battle, Tammy. By the time I get one bit done, the first has gotten weedy again.

Thanks, Deanna and Mountainwoman and Kaye! There's a lot to be said for those charming farmers' markets -- it seems there are more every year.

This garden in the ravine looks amazing. I like the bold tripod trellis as well. Drip irrigation is an excellent idea and saves so much water.

I wish I were having such a great time, a lot of work but such a pleasure, and your John is just adorable. Loved the pics

Does John have a brother? -- I need someone to keep my gardens under control. Your box gardens are great to control the amount of weeds that can take-over your plantings. Lots of work but I expect very rewarding. -- barbara

This sure is one great fellow..scones and pizza..sorry I got carried away..should be talking about how grand nature is!!

That clever fella John built those trellises too, Paul. . . and our house. And yes, the drip irrigation is WONDERFUL! This is only our second year using it and I'm totally convinced!

You're right, Pamela -- he is pretty darn adorable.

Actually, Barbara, he does have a brother -- a very married one. Sorry :-(

Lyn. I'm thinking scones and pizza are pretty natural -- if not quite 'Nature."

I've got a man that both gardens and cooks too - makes a gal go absolutely weak in the knees, don't it?

Your John is a master gardener – and how lucky you are! Splendid results from what I see. A tidy garden full of promise.

That's what I love about gardens, Vagabonde -- the implied promise of wonderful harvests to come.

Yes you are a lucky woman-and the garden looks great too : )