It's Martin's (Square Sunshine) fault.  Back on May 1, he posted a picture of a motorcycle for Sepia Saturday and I responded by telling him of my Great Adventure that began at Elite Motors in Tooting (near London.) And he sent me a link to the first picture -- that's Elite Motors as I remember it. Not exactly sepia but about forty years ago.

It was mid-May and my husband  and I flew to London via Icelandic Air (the cheapest way to get there) and made our way to Tooting where we took delivery of out brand new BSA 650 Thunderbolt, purchased through an export scheme which meant we didn't have to pay the tax if we took it out of the country in a certain amount of time.
Imagine the bike below with side carrier boxes over the rear wheels, a knapack on the handle bars, a duffle bag containing all our camping gear, and two people in scruffy, low tech garments. (We were so envious of the leathers the 'real' bikers wore.)

As we made our cautious way through London traffic, a rowdy bunch shouted at us "Where's your 'arley Daividson?" and asked if we were on our way to the Isle of Man. 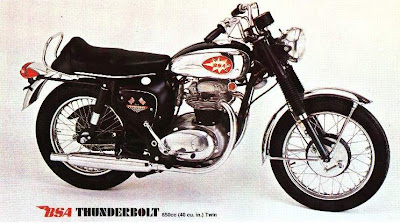 The following three months were heavenly. We  headed south toward Devon and learned about caravan camps, clotted cream, pasties, shandy, baked beans on toast, and the innumerable differences in our common language.

We walked through Stonehenge in the early morning, before the tour buses arrived; we camped at a farm where the apple blossoms fell on our tent; we stood in a bluebell wood one night while bats flittered about our heads . . . 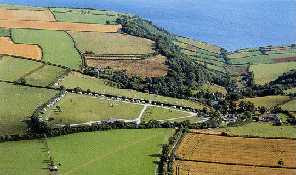 I'd already been an Anglophile, thanks to P.G.Wodehouse, P.L. Travers, C.S.Lewis, Kenneth Graham, J.R.R. Tolkien. T.H. White, Elizabeth Goudge, and many, many other authors whose England I'd absorbed. And it  would have suited me fine to spend the whole three months we'd allotted in touring my spiritual home.


But we had determined to see as much of Europe as time and budget allowed. (Yes, we had a copy of Europe on Five Dollars a Day. And by camping and eating in restaurants only rarely, we came close.)

In three months time, we managed to visit quite a few places --

Spain  where the sparkling wine at an amazing 25 cents a bottle in one camp was a joy contrasted with the eerie sight of the a lone Guardia Civil with his machine gun in the middle of nowhere. And France, where I fell in love with Marie Antoinette's Petite Hameau and we lingered for days in the charming town of Loche -- home of Agnes Sorel (and her wardrobe malfunction.) Oh, the fresh baguettes! And the excellent butter and cheese! Who needed restaurants? 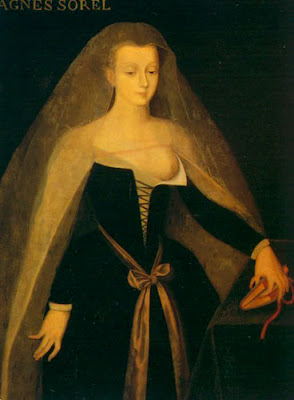 It was the trip of a life time -- on to Italy (Venice Rome and Florence), Austria (Salzburg and the salt mine at Hallein but not Vienna, alas, Merisi), Switzerland, Germany (Munich and the Black Forest,)Belgium (probably the friendliest of the countries we visited.) Holland (and how amazed we were at the diversity of the people there and the food from exotic lands) and so back to England.
We returned to Tooting where the nice folks at Elite (we loved the fact that the mechanics wore ties and long white coats like doctors) took the bike and arranged for it to be shipped to us in the States.  Where, a few years later, we sold it for more than we'd paid for it -- the trip and the deal of a lifetime.
Where are my pictures of this odyssey? On slides . . . somewhere. But in my head they're clearer than any slide could ever be. Thanks, Martin, for reminding me of the Great Adventure!

(For more Sepia Saturday posts from all over, go HERE. 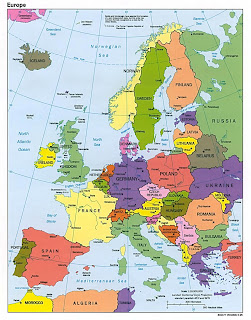 What a wonderful ramble you and your husband had! I'm re-reading "The Wind in the Willows" right now and when I saw the title of the post I immediately thought of Mr. Toad.

What an exciting journey that was! I wished the exchange rate of the Dollar would be what it was back then, not even to dream of the prices here. ;-)

My parents spent their honeymoon on a motorbike. Somehow I never got the bug.

What a wonderful journey. Caravan Parks are great fun and you get to meet heaps of interesting folk. We toured Australia for 2 months which was a bit hurried. My most favoured place was the Red Centre, it is awesome!
Thank you for all the thought provoking information and the photos, lovely.

Wow. This is such a beautiful post. I enjoyed reading about your journey. Toodles!:)

Glad to have been of service, although I wasn't wearing a tie and a long white coat when I sent the email!

Great post, Vicki. You certainly covered a lot of ground on that faithful BSA.

that was an amazing post. i long for just such an adventure and walking through stonehenge int eh morning quiet...wow. those are the moments....so very cool.

Victoria - do you know, there are places in England one can hire a horse-drawn caravan (not quite as lovely as Mr.Toad's, but still ...) and take it camping?

Merisi -- even back then, we were shocked at the price of food. But we had to be very frugal.

Crystal Mary -- How I'd love to see Australia -- especially the wildlife!

And thanks, Martin, for giving me the picture -- I shall have to fine those slide from long ago and see if I can get them on the computer. There was a journal as well but where is it?

Brian -- The Stonehenge thing was magical -- now one isn't allowed in amongst the stones -- being kept on a respectful perimeter path but then we could actually touch them. Like I said, magical!

Wardrobe malfunction, indeed! (Sorry, I had to get that off my chest.)

You're a biker-chick! So am I! (Well, sort of. We had a Kawasaki KZ-550 Ltd. for a while, but had to sell it.) My husband's always had a dream of owning one of the newer BMWs. Instead, we got a Mini Cooper. I think it would be cool to have a Danish "Nimbus".

That sounds like a fantastic tour through England and Spain. I've been over there a few times and my aunt used to live in Devon, but Cornwall is the place I would return to in a heartbeat.

It certainly was the trip of a lifetime! I've often thought a Merchant Ivory road trip across England would be delightful. But then I'd want to do the rest of Europe, too!

I was born in Mitcham, not far from Tooting, so this post was a special treat for me.

And what an excellent adventure.

What a grand adventure indeed; like Victoria, I thought of Wind in the Willows when seeing you liked Kenneth Grahame & reading of your motor bike tour.

Oh what a wonderful trip! Thanks for taking me with you. You're the second "Sepia Saturdayer" this week to mention Stonehenge. I commented on the other one that I had been to Stonehenge in the 60's when you could still touch the stones. The next time, just a few year ago, a guide led us around a roped-off path. I forget why but she carried a divining rod and it was part of her presentation.

P.S. It was Martin who also wrote about Stonehenge.

What an adventure! I have to get out of New England and visit Olde England.

Well this was the wrong entry to read three days after my return from England as I'm desperately trying to squash down my longing to return, but it was a lovely and a fun read so I'm glad I did anyway.

Oh so charming and romantic! How I'd love to do that myself, with my own husband. Lovely!

What a wonderfully fun memory!

And thanks Vicki for giving us such a treat of a story. I will be heading down to Dorset and the South East in a couple of weeks time although, I should point out, not on the back of a motorbike.

It does indeed sound like the trip of a lifetime!

It certainly sounds like a wonderful trip. You need to find your slides. My husband bought me for my birthday a little thingy where you place your slides and a memory card, then it is supposed to transfer the slides onto the memory card, and you can download them to your computer. I have not tried it yet with all our trips, but will do so soon. I had books like yours, Amsterdam on $5 and England on $5 and we managed that pretty well, like you did. It was fun, wasn’t it?

I'd read a book about this trip! How wondrful.

Poetikat -- off your chest, indeed! (tittering)

I've not been to Cornwall but from reading Daphne DuMaurier and Rosamund Pilcher I know it must be terrific.

Barbara and Nancy - yes, on this trip we could touch the stones -- which was amazing.

Sorry, Tatty -- weird, isn't it, to be homesick for a place that's not your home?

Have a good trip, Alan!

Thanks for the info, Vagabonde. I'll go looking for those slides.

Poetikat -- off your chest, indeed! (tittering)

I've not been to Cornwall but from reading Daphne DuMaurier and Rosamund Pilcher I know it must be terrific.

Barbara and Nancy - yes, on this trip we could touch the stones -- which was amazing.

Sorry, Tatty -- weird, isn't it, to be homesick for a place that's not your home?

Have a good trip, Alan!

Thanks for the info, Vagabonde. I'll go looking for those slides.

I also bought my 1971 Norton at Elite Motors "tax free". Me and my then girlfriend flew to London to pick it up. For the life of me I can't understand how we actually got to Italy without saddlebags or any kind of storage for our stuff. No helmets either!

montelatici -- what fun to hear from someone who did the same thing!