As most of you know, I teach writing classes and workshops now and then. And one of the first things I tell the bright-eyed, hopeful students, right after the part about probably not getting rich, is the necessity of being able to deal with rejection.

Let's say one of these bright-eyed writers has just finished her novel. Maybe it was the distillation of years and years of blood, sweat, and tears. But at last she's typed THE END, proof read again and again, and written a marvelous query letter, following the guidelines laid out in various sources. 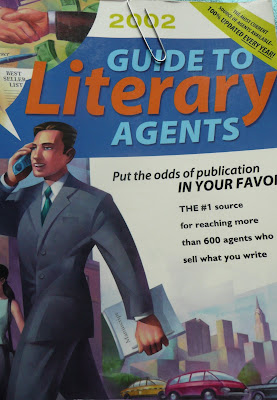 She does her homework -- finds the agents who are interested in representing the sort of book she's written and, full of hope, picks the biggest and best known of the lot and sends off her query. Maybe, just to play it safe, she sends off a few more to some back-up agents. Then she sits back and awaits the phone call (Maybe it's an email now -- back in '02 it was always a phone call) from the super agent while leafing through brochures for expensive cars -- maybe a Mini Cooper would be nice for those author tours.

And it could be that lightning will strike on the first query but, for most of us, finding an agent is a long slog through a rocky and inhospitable land with rejection on every side -- lots of it. 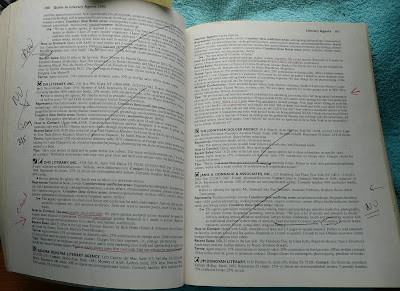 I didn't keep exact count but I know that in my search for an agent, I sent out over sixty query letters. As the rejections came back, I wrote NO by the agent's name in my Guide to Literary Agents where I was keeping track of the dates I'd queried each agent.

And each rejection was something like a blow to the gut. One needs to be physically and mentally strong, I tell the bright-eyed young writers, to deal with querying. 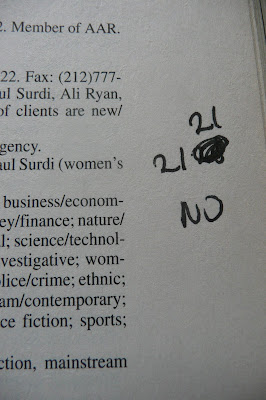 I had some agents ask for more pages or the complete ms. -- this was encouraging-- and a few handwritten notes on the rejection letters began to seem like hugs. 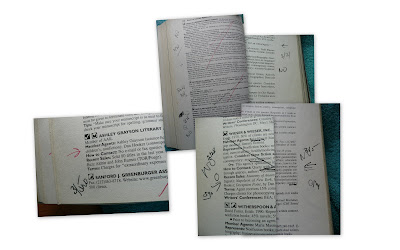 I was trying to begin a second book but have to admit that as the rejections kept coming back, it was hard to focus. My chief priority was not to let my rejection dejection spill over into my home life. So there was a lot of internalizing.

The very worst was an agent who'd requested a whole. She sent me back my SAS postcard with a note saying her email wasn't working and would I call her?

I was sure that This Was IT.

When I called her, she said she'd decided to pass. What twisted cruelty! Couldn't she have told me this on the postcard.?

B___h, I thought as my gut twisted again.

The main thing that surprised me was the physical response -- I felt increasingly worse with each rejection -- I ached all over.
It was three months (months that felt like forty years of wandering in the wilderness) from sending the first letter to the phone call from an agent offering me representation.

But when the call finally came, oh heavenly days, I was HEALED!!

If there were some more rejection letters after that, I hardly noticed them. 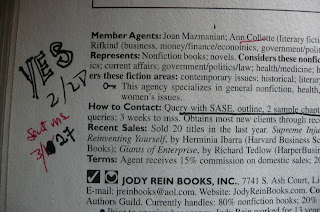 And then of course, it was all to do over again as the agent sent the book round to editors -- but at least we were in it together and she was endlessly supportive, pointing out what positive rejections these were.

When that first book didn't sell, I wrote a second and it was the same weary round again. I still had the agent though and this time the book sold!

Now I'm at work on my sixth book with the same editor -- and same agent. But there was a lot of rejection to wade through to get here. And I've heard stories that make mine seem like a mere nothing -- people who tell me how lucky I was -- they had hundreds of rejections before they finally found an agent -- they papered the bathroom, the dining room, the living room with rejection letters.

And since I've been in this writing game, I've heard many people say they quit after five -- maybe ten rejections.

"Honey," I would tell the bright-eyed young thing who's about to give up, "you're just getting started."

As the saying goes; nothing worth having comes easy.I say; thank goodness YOU didn't give up!! :)

I was curious about how you got started Vicki, and the process involved, but was afraid to ask. Your initial patience paid off, and three months sounds pretty quick, to me.

I've never been brave enough to send my work to the agent. I would like to, but I'm afraid of the rejection.
Blessings, Star

I didn't even know about agents when I was younger, Star, and I would have probably been afraid of rejection too. Something about passing the half-century mark really freed me up from worrying about stuff like that.

Well, as long as they're positive rejections... ;>)

Wow, I sure do admire your perseverence, Vicki... three or four rejections would have had me throwing in the towel!

I enjoy hearing about your writing process. I've often wondered about that after finishing a great novel. I can see how someone could come up with a great plot, but to flesh out all the characters and fill in all the thousands of details that give the story life - just seems like a mystical thing to me! Maybe it's kind of the reverse of making a movie from a novel. I'm always disappointed in them, because so much has to be whittled away to squeeze the story into a two hour movie.

Anyway, I'm sure glad you hung in there!

It's a positive rejection when they say they like the writing but that the book isn't right for their list. We got a lot of that -- the writing was a little too literary for genre and a little too genre for literary. Editors like to be able to put things in neat categories, it seems.

Thanks for the last two posts...it's fascinating to hear the 'birth' of your writing career. I used to do some freelancing with spot drawings (for magazines) and the 'positive' rejections were much more easier to take. It was always encouraging to get the little personal notes and sometimes suggestions. I think the hardest would be when they encourage you THEN shoot you down (like the lady that had you call her....)
Tammy

Yes, Tammy, that one who had me call her was the absolute low point.

Nobody likes being told their work isn't good enough -- but it's part of the learning process sometimes to take that as an invitation to try again and get better!