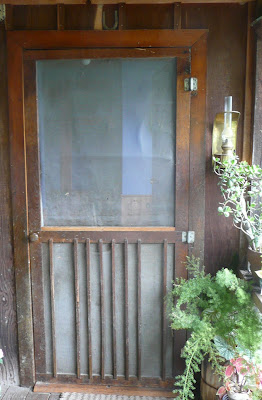 That's a horse shoe (well, actually probably a mule shoe) over the door -- for good luck. My grandparents had one over their back door and they insisted it had to be in the UP position 'to hold in the good luck.' 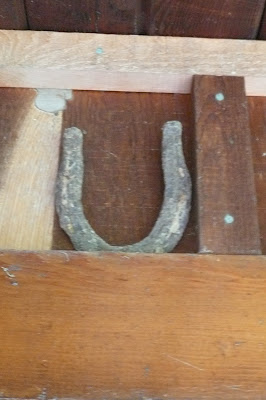 They never mentioned witches but my reading has revealed that the horseshoe, as used in the British Isles, was a charm to keep witches from entering your house at night. (Bad witches, it goes without saying -- not like my friend Byron, The Village Witch.) 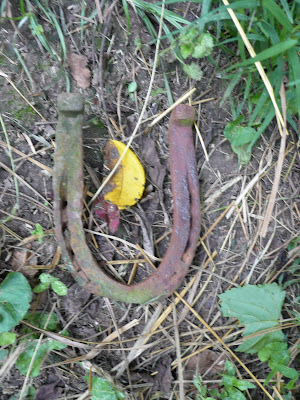 It had to be a used horseshoe because the way the charm worked was that before the witch could pass under it, she had to retrace every step that shoe had taken. So the householder would take care to choose a very worn shoe to insure that the witch couldn't complete the task before sun up. After which, evidently, all bets were off and the witch would have to start over. 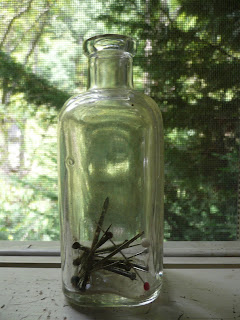 Unlike some of those in old times, this one is meant only for protection on the house. And only contains nails and pins.

Do I believe this stuff?

Not exactly . . . but I like keeping some of the old ways alive.

Very interesting! I always knew the horse/mule shoe above the door was good luck, but the other is all new to me. 6:30 a.m. and I've learned something new today!

This made me laugh because I thought of the witches trying to get into our garden. When we were digging out our garden we found a very old horseshoe and hung it over the gate to the garden. I love these old superstitions.

Does it work on witches with a slightly different spelling?

I didn't know about the "witch" bottle but my ancestors all did the horse shoe thing. In New Orlean you see lots of doors on houses painted with a "aqua/blueish" paint that I'm told is the Voodoo color to ward off Evil. Hey, it never hurts to be prepared does it? Keep that Mojo going!

so would the witch then have to walk on pins and needles to cross the threshold? :)

All this superstitions remind me of "May this house be safe from tigers."

I think it was Alexander King, a friend of Jack Paar's who always said this on leaving Paar's house.
Paar finally said, "Alexander, there are no tigers around here."

To which, King replied, "You see, it works!"

I think there are so many channels in this life and universe..........well, why block any of them off? Operating with Parental Guidance, of course!

In France too, in rural countries, horseshoes were put in the front door , to give good luck .
(But without any relation with witches )

It's probably just a part of human nature, don't you think? to look for something tangible -- a horseshoe, a four-leaf clover, a rabbit's foot -- and load it with our hopes, thereby turning into a charm of sorts.

Ooooh, you mentioned me. I'm blushing! The witch bottle is also called a war bottle in some traditions and there's often a liquid element involved. A golden liquid element...

It's also said that rowan trees (mountain Ash here) keep witches away but most witches I know love them.

None of that golden liquid in my witch bottle -- do you suppose that's what Howard Hughes was up to in his later days? Or theat artist -- was it Serrano?