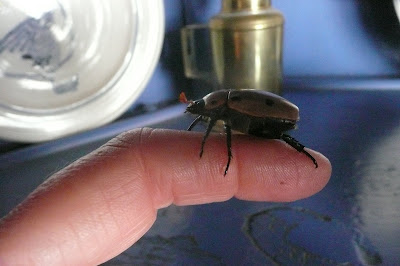 Early in the morning I found this handsome critter clinging to a piece of embroidery I had left by a lamp. Evidently he had come in during the night, attracted by the light which had been left on. He clung to my finger with his strong scratchy feet as I carried him outside. . . 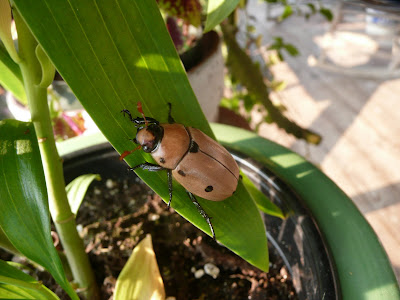 . . . and decanted him onto the lily leaf. Such a good-sized beetle, and so attractive with his mocha coloring and evenly placed black dots. If Coco Chanel had been into designing beetles, this might have been one of hers. 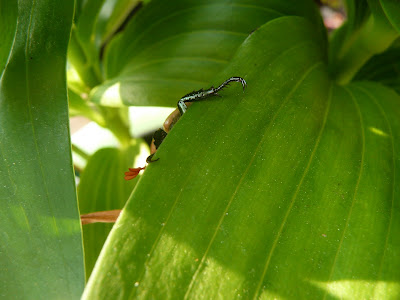 I found out that he's a Grapeleaf or Grapevine Beetle -- which makes sense as we have wild grapevines growing not for from the house. And he's welcome to all he wants to eat.

A close look reveals that he is "fearfully and wonderfully made . . ." What a beauty! 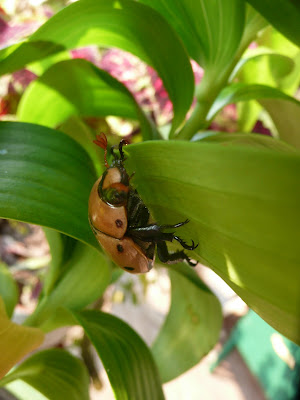 This is a very nice set of photos of all the sides of the beetle. Thank you! Thanks also for your comments.

As always, click on the photo to biggify. He has the most gorgeous antennae, ending in triple fans.

Great photos, Vicki! I love his antennae and his beautiful coloring.

His coloring really reminds me of those Chanel pumps -- mocha with a black patent leather toe.