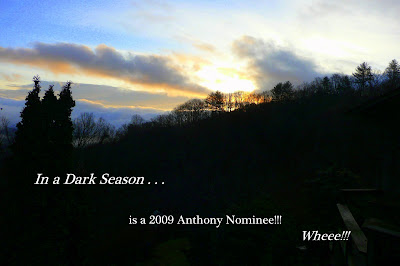 It was a week ago -- over a week -- that the email fell into my in box late at night -- a quiet little bombshell..

Dear Vicki,
Congratulations! You have been nominated for a 2009 Anthony Award. Your book, In a Dark Season, has been nominated in the category for Best Paperback Original. . .

At first I was elated -- a kind of nunc dimittis moment. This is something I've hardly dared to dream of . . . but then, somehow I felt suspicious. Immediately I replied to the email, asking if this was true.

I emailed my agent and my editor, asking them if they know about this nomination (generally my editor is the one to tell me if something noteworthy has happened.)

No answer -- not a surprise -- it was late at night, as I said. John was out of town and there I sat, wanting desperately to tell someone this good news -- if it was good news and not a cruel joke.

Neither the dogs nor the cats were the least bit interested when I explained to them that the Anthony is one of the mystery genre's most prestigious awards. Even if you don't win, just the nomination is the kind of thing authors have on their book covers or after their name -- as in Vicki Lane - Anthony Nominee.

This fan-based award is tied to Bouchercon -- the mystery convention in the US -- and the nominations come from attendees of the past years as well as those registered for this year. Final voting is done at Bouchercon by those present and the awards are presented on the next-to-last day.

I passed a fretful night.

The next morning I had a cautious email from my editor saying maybe it was true but she was surprised she hadn't heard something and she would check with Publicity.

Then there was a phone call from my agent, delighted and ready to celebrate -- until I told her that the editor and I weren't entirely sure . . .

Poor Ann! By the time we hung up, I had managed to convince her that I just might be the victim of a scam or a practical joker.

Time passed. Slowly. No word from anyone.

Finally, about mid-morning, I decided to email Jim Huang, one of the co-chairs of this year's Bouchercon, and ask if this was for real. I met Jim last year in Baltimore and he was friendly and approachable so I figured that an email from a semi-demented author might not bother him too much. Besides, did I mention I was desperate to know the truth?

And then he answered.

Yes, Vicki, it's true. You are a nominee.

But, he cautioned, this news isn't to be made public till we release the entire list . . . the following Monday, he said. Which turned out to be Tuesday afternoon.

So I've been writing about chickens and flowers and asparagus instead of shouting this good news from the virtual rooftops of the blogosphere.

But now I can!

Talk about gathering rosebuds -- this feels like the whole garden!

CONGRATS Vicki!!! I bet you were besides yourself during this waiting game ... whew!

I really do hope you win Vicki!
It couldn't happen to a better person or author! It's a wonderful honor considering the amout of books they have to choose from just to be a nominee, isn't it?

That is such wonderful news, and so richly deserved! I can't believe you managed to keep quiet about it for a week! Your self-control is awe-inspiring. I so wish I was going to be at Bouchercon this year to see you, but I'm busily saving my pennies for San Francisco the following year - and I don't think my family would let me go two years in a row anyway! Congratulations again!

A million thanks, Pat and Carol and Karen! It's been AWFUL keeping quiet about this. And when the nominations weren't published on Monday, I was beginning to get downright cranky, as my husband would tell you.

Keeping that news to myself would have meant having Donald tie me up and stick a sock in my mouth. pffft.

Vicki - HUGE Congratulations (again). And I am tickled pink that I'll be able to vote. It won't take me a millisecond to mark my ballot this year. And I do hope you win (But of COURSE I do!), but you are absolutely right. This is one of those awards that is very well regarded, and quite prestigious. The nomination is something you'll carry with you forever, and quite well deserved.

Kaye, I think that I was afraid if I said something They would withdraw the nomination. But I did get progressively more and more fidgety and, as I said, downright cranky -- to the point of speaking sharply to a dog I'd stumbled over for the third time in as many minutes.

Vicki, I'm just back from Ga. and checking blogs--wow, what a great way to begin! Congratulations many times over. I've been "blogless in Georgia," so I need to get busy blogging, once I've done my garden duties. Thank goodness frost didn't harm it Monday night.

It's a wonder you didn't explode all over yourself! What a wonderful thing this is. I'm very happy for you. By the way, you did a great job of acting all nonchalant on your blog! ;-)
Congrats!!!!!
Tammy

Welcome back to God's country, Kay! I've got to get busy in the garden myself -- maters to set out, etc. We escaped any frost too, thank goodness.

Yeah, Tammy, I thought I sounded pretty calm. I kept wanting to drop little hints -- I know something youooo don't -- but I managed no to.

And thanks for the good wishes from everyone!

Congratulations !
Is your book translated in french ?
Thanks for your visit !

Hello, Miss Yves -- This book is the fourth of a mystery series. The first two have, indeed, been translated into French though only the first is available now. It is titled La Montagne des Secrets and is from J'ai Lu

That is FABULOUS news, Vicki!!! Many congratulations! What a huge honor. I am proud just to live in your bloggyhood.

Hey, Willow -- It's very exciting to me! In the world of mystery, this award's a pretty big deal and I am such a small fish in a very big pond that it came as quite a surprise to be nominated.

Congratulations!! Fantastic! Now you can celebrate! I wish I could join you, for this is great.It must have been very exciting foryou all the time you weren't quite sure wether you were a nominee or not.Nerve-wracking I guess.

Nerve-wracking is what is was, Reader Wil! But we drank champagne last night and now I'm just existing in a happy glow.

I'm coming late to the party, but have been thinking of you and your wonderful ''Dark Season'' since hearing about the nominations.
Couldn't have happened to a nicer, or more talented, writer. Kudos!
Hope to see you at Bouchercon, where I'll lift a glass to you.

Sounds as if MAMA is doing really well - the TODAY show, no less!

You really captured the feeling of the old bits of Florida that I knew and loved.

Look forward to seeing you in Indianapolis!