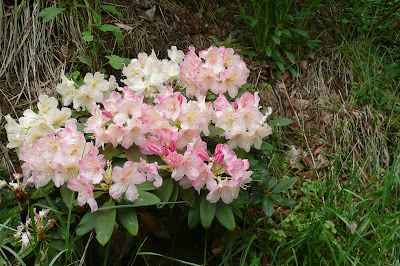 The plethora of bloom at our place just now expresses perfectly my state of mind. More and more good news! 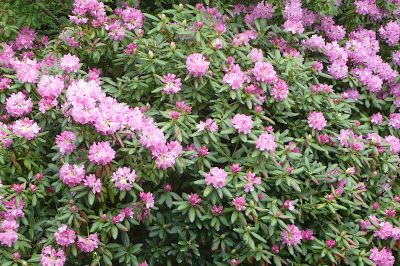 As soon as Herself told me that she had accepted the rewrite of Birdie's book (which I really must learn to call The Day of Small Things,) I sent her the proposal for the next Elizabeth book -- the one where I get around to dealing with that troubling message from Aunt Dodie.

I am already under contract for this book but Herself still has to approve my plan -- a sort of road map -- for the book before I begin. And it's not automatic -- it's happened in the past that she's rejected my ideas and, kindly but firmly, sent me back to the drawing board. 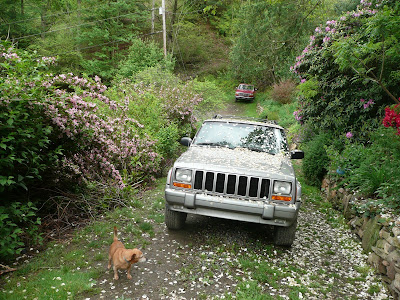 But this time my luck was in! Herself was most enthusiastic about my plans for Elizabeth's next adventure and gave me a big thumbs-up! So I'm diving right in -- the book opens as Elizabeth gets another phone call.

I put the phone down and glowered at it, as if it were responsible for this new and unwelcome twist in my life. "Or as they say around here, crazy as a shithouse rat. And with all the farm work and our wedding set for early June, this is definitely not a good time for a visit."

I was thinking out loud, trying to make sense of the just-ended conversation. "But if things are so bad with her husband that she wants to come stay here -- and for a month or more -- what can I do? And things must be seriously bad -- Glory hates it here. 'Too much nature, she always says -- as if nature was something you wouldn't want to step in."

Phillip looked up from his book with that calm, amused look he's so good at. "This guy's -- what -- your sister's third husband? So problems with married life aren't exactly new to her. What's the big deal this time?"

I continued to stare at the phone, wondering if this had been some elaborate joke. But the thing is -- my sister has no sense of humor.

"Well," I told Phillip -- my poor long-suffering Phillip who deserves better than this, " according to Gloria, the problem is that Jerry's trying to kill her." 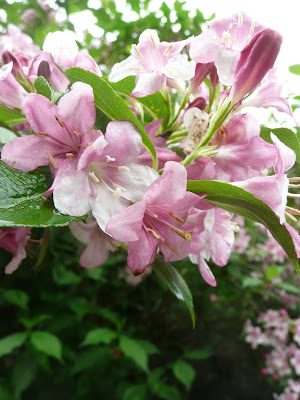 Email ThisBlogThis!Share to TwitterShare to FacebookShare to Pinterest
Labels: Under the Skin

That troubling message from Aunt Dodie set my head to spinning!!!!!
Talk about a mystery - I haven't quit pondering it yet!

Gorgeous blooms and great news on the book front, xv.

Kaye -- all shall be revealed (in time) and patience shall be rewarded.

Thank you, Vicki A.!

Vickie, I'm already anxious about your next book! I've learned over my many years that a sister can be your best friend or your worst enemy! I've always said that you can pick your friends but you're stuck with family -- and it sounds like Elizabeth is going to have her hands full with Gloria!!!!

Nancy, I'm writing without firsthand knowledge here -- I had no sisters and my mother was an only child. I'm just going to have to use my imagination -- and observation. But I can promise you that it's going to be an interesting time for Elizabeth and Gloria.

Hmmm, sounds an interesting lead in. I wonder what comes next? Lovely pictures of the flowers.
Blessings, Star

Hey, Star -- What comes next? Ups and downs and a roller coaster ride of emotions along with a few thrills and chills and psychics -- real and phony.

And yes, the flowers are amazing just now!

Good morning!
I sneaked in here thanks to Willow's. ;-)

I have the fondest memories of our road trips down the Blue Ridge Parkway to the Great Smoky Mountains National Park and through all of North Carolina down to Williamsburg in Virginia. Your rhododendron pictures remind me of camping at Roanoke Mountain in the fall, even though that lies still in Virginia.

Good luck in all things big and small!

Welcome, Merisi! North Carolina is a beautiful part of the world and May is a fine time to be here!

Though, after visiting your blog and enjoying your lovely photos -- I see that Vienna's pretty amazing too!

Will try to speed up the process this time, Victoria! (On, you huskies!)