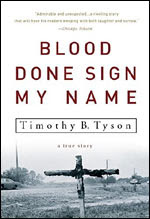 "... one of the most powerful meditations on race in America that I have ever read"
(Cleveland Plain Dealer)

Lots of folks have praised Timothy B. Tyson's Blood Done Sign My Name and rightly so.

An autobiographic account of a time many of us would rather forget, it begins in May of 1970, in the little town of Oxford, NC, when a playmate whispers to ten-year-old Tim Tyson, "Daddy and Roger and 'em shot 'em a nigger."

As I read, my thoughts kept going back to my childhood in the Fifties -- and all the things that I was blind to -- separate drinking fountains, schools, hospitals, taxis, waiting rooms, rest rooms for black and white; the black woman who worked long hours for little money, cleaning my grandparents' house, cooking many of their meals, but never eating off the china the white people used -- no, my grandmother had a special shelf with Annie Davis's plate and glass and flatware.

It's how things were.

And the man who came on Saturdays to mow the lawn -- Fred Gardner had a Masters degree (from a black college, of course) and was a schoolteacher (at a black school, of course.) He mowed lawns on Saturday and gave the proceeds to his church. And every Saturday morning, my grandfather (who had an eighth grade education) would go to the garage and start the lawn mower for Fred, feeling that it was too complicated a process for him to understand.

I was fortunate never to have seen the ugliest side of racism. But the benevolent side was bad enough. 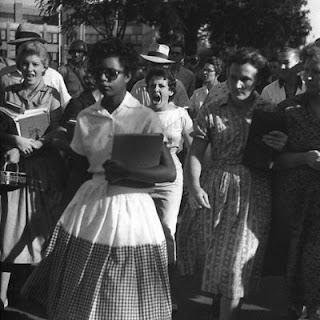 This picture, taken at the time the schools in Little Rock were being integrated, shows so clearly how racism's evils affect both sides. Caught up in mob hatred, the white people are a portrait of evil and ignorance at work.

A few years ago, I saw an article in which the screaming young woman in the center, older and finally wiser, had sought out the calm girl who had been the object of her anger and apologized.

Though my sins were of omission, rather than commission, I wish I could apologize to Fred Gardner and Annie Davis.
at May 14, 2009

A thought-provoking post, Vicki. My childhood suburban enclave was so lily-white that I didn't have any experience of race until I got to college. Now I look back and wonder how that happened.

And love the Link Within. I may never get to work this morning...

Vicki...a subject dear to my heart.
It was only after reading Kathryn Stockett's wonderful book " The Help", that I realized, Ruby, the black woman who worked for my grandparents, knew that as a child,
I knew no other way. I am referring to the fact that she was called "nigger Ruby" and I cringe when I think I probably called her that myself!The subect makes mr very emotional.
~ Carol ~

Marta - the link within is wonderfully insidious. "Just one more,'you say and all of a sudden it's almost lunchtime and you're still in you jammies.

And Carol -- We were all blind -- brought up with That's how things are, as were our parents and grandparents.

A human kind of human said...

Oh Vicky, Although I live thousands of miles away from you, I could have written this post. This is exactly how I was brought up in South Africa during the 50's and 60's and it was only in the seventies, once I started moving out into the world, that I started noticing the injust treatment of the black people of my country. Still it did not bother me as it should have because by then I was so brainwashed by the society I lived in that, as you said: "It's how things were." Another bit I agree with is: "Though my sins were of omission, rather than commission", I still regret that I did not actively became involved in fighting the evils of our "Apartheid" system.

Yes, indeed. And now I have to wonder what injustices I may be blind to right now.