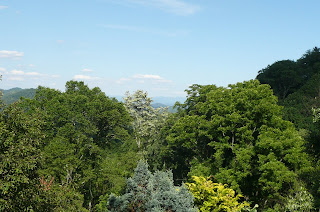 In the summer of 1973, John and I, with our not-quite year-old son, went looking for a place to live that wasn't Florida. On our way north, though our heads were filled with visions of cheap land in New York state or even Canada, we stopped to visit a friend of mine from college.

She and her husband had recently moved to a mountain farm in western North Carolina and, as I hadn't seen her in over 10 years, the opportunity was too good to miss.

On our first night in North Carolina, John went with my friend's husband and his two brothers to a little music festival in a place called Sodom. (We women stayed home with the babies.) John told me later about his first introduction to the county that was to become our home -- the matter of fact way in which his host put a pint bottle of whiskey in one overall pocket and a pistol in the other and the way the car swerved around the narrow road that wound its way over Lonesome Mountain -- where the VISTA worker was murdered, as one brother told him.

The 1970 murder of VISTA worker Nancy Morgan was still a hot topic when we moved to the mountains in 1975. And it was still unsolved. Local opinion seemed to be that she had been killed by another outsider -- in fact, in 1985, a fellow VISTA worker was tried and acquitted.

Outsiders, on the other hand, tended to believe that it was the work of a local person or persons and that the sheriff's department knew more than they were saying.

Almost forty years later, the murder is still unsolved. But Mark Pinsky is on the case. 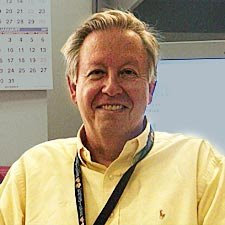 Mark came to visit me yesterday -- I was the last stop on his Columbo "Just one more question" tour of our county. Mark has been interested in the case since the beginning -- and over the years has visited the area to ask questions of all sorts of people, following facts as well as the elusive hints and allegations. He's working on a book about the case and is in the final stages -- trying to wrap up all the loose ends and be sure that he's learned as much as possible from anyone who knows anything about the matter.

I'm not one of those -- I know nothing -- but I've also been interested in the case because it was the basis of the subplot so recently removed from Miss Birdie's book. I called the murdered woman 'The Do Good Girl' and came up with what I thought was a pretty good answer to the whodunnit question.

Since I'm writing fiction, the real murder is only a springboard for my imagination. I've changed lots of details and purposely not read a lot about the actual case. Two remarks -- one made by a local man about 33 years ago, the other, heard more recently -- were enough for me to spin a tale of 'what if . . .' 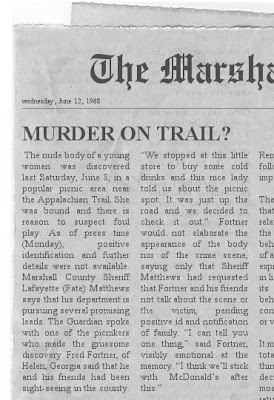 I'm hopeful that I'll get to tell my Marshall County version in a later Elizabeth book.

That's really interesting Vicki.
I'll bet that will be a good read.

Tragic event, but lots of inspiration for a good mystery!

Mark is sending me a copy of his manuscript -- I'm looking forward to seeing his conclusions.

Thanks for this interesting post Vicki! Do you think this crime will ever be solved? It must be very difficult. Thanks also for visiting. Have a great week, Vicki!

I have a feeling that the perpetrator(s) as well as those responsible for the coverup, if coverup there was, are mostly dead now -- but maybe not. It'll be interesting to see what Mark's conclusions are.