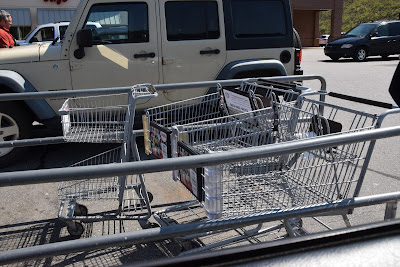 Sometimes it's the littlest of little things that can make me wonder what's wrong with folks.  As in, whoever returned that second buggy in such  way as to block the whole corral.  Yes, no big deal to pull it out and put it right but still . . .

And then I began to remember Philosophy 101, my freshman year at Emory, and Kant's Categorical Imperative.

Our professor, Dr. Gould, was something of a magician. Each week he introduced us to a new system--Humanism, Utilitarianism, Positivism, Existentialism, Pragmatism, to mention a few I kinda remember--and presented each so convincingly that I would leave the class thinking, Well, that makes sense. Now I know what I believe.

Till the next class, when I'd find myself convinced that some  new -ism, the opposite of what I'd embraced the last meeting, was It.

About this time is when I was enamoured of Atlas Shrugged and I actually wrote my mid-term paper on Rand's personal philosophy Objectivism.  Dr. Gould met with me in his office and proceeded to demolish all Rand's talking points. He was appalled that I'd fallen for this system of belief. "But where's the compassion?" he shouted. "There has to be room for compassion."

So, I got over Ayn Rand halfway through my freshman year. Thank goodness.  That was just one of three enduring lessons from that class.

A second lesson was Kant's Categorical Imperative, the first formulation of which was: "Always act so that you may also wish that the maxim of your action become a universal law."

In other words, maybe not putting your shopping buggy in the corral properly is no big deal. But what if nobody did?

Chaos in the parking lot.

The third lesson I learned was a deep mistrust of my own ability to hew to a prescribed belief system. With this came a new found appreciation for Zen Buddhism. Not, I hasten to say, that I thought I might become a Buddhist. Just a pleasure in the paradoxical koans and the escape from logical thinking.

What is the sound of one hand clapping?

Or perhaps What does a shopping buggy say?

I'm guessing there are some Objectivists on the loose. They're in our government. . . and they're in this parking lot. 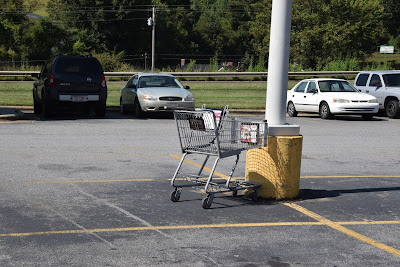 Whenever I put my shopping cart in the corral, I straighten out all of them, in the two separate sizes. It's just my way of ending a bit of the chaos in the world.
Deana the Queena

Brings to mind just how easily our college minds can be molded. We thought we were so smart and had great insight into solving the problems of the world. We thought college really enlightened us. I still remember the remarks on my first English paper, comparing high school class to large college lecture rooms. I thought it was great and the professor wrote, "It might be well to keep in mind that a college classroom is not a Y-teen meeting. Your theory is as full of holes as a prize swiss cheese."

The current administration doesn't at all reflect the principles of Objectivism, and neither does an errant shopping cart. The compassion in Atlas Shrugged is in Dagny's treatment of Cheryl, in Rearden's treatment of the Wet Nurse--there are more examples. Why do I see those things and you don't? Our culture provides us with a set of thought boxes in which to categorize things. Your teacher transmitted those to you, but the set you're using led you to misconstrue Rand's ideas. The categories you learned are our culture's accepted conceptualizion of the world. One of Rand's most important ideas is that there is a basis in reality for standards of right and wrong in conceptualization. You can do it wrong, and if you do, you won't understand the world as well as you might. To double-check your understanding of Atlas Shrugged, consider re-reading it with the guidance of the "Atlas Project". That's a series of seminars on chapters of the novel, which can be found at the Ayn Rand Institute channel on Youtube.

Thanks for this thoughtful response, Anonymous (Alaine?) As I said, it's been a long, long time since I read AS and I certainly am not qualified to argue your points.

I don't have too many pet peeves (can you by definition have more than one?) but this is one of them. I seem to feel obliged to straighten the coral out at least a little bit almost every time.