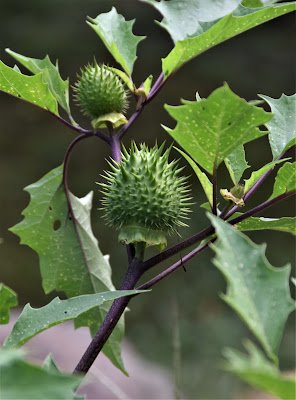 These dramatic seed pods carry a warning -- poison! Jimsonweed (Datura stramonium) is common around here -- this one showed up in our garden. I already knew it has hallucinogenic qualities--a neighbor told me years ago that when she was young, thrill-seeking teenagers would lay one of the little seeds inside their lower eyelid and it would make then see strange things.

What I didn't know was that the name Jimsonweed was originally Jamestown Weed, derived from Jamestown, Virginia where English soldiers, attempting to put down a rebellion in 1676, boiled and ate a quantity of the leaves "the effect of which was a very pleasant comedy, for they turned natural fools upon it for several days: one would blow a feather up in the air; another would dart straws at it with much fury; and another, stark naked, was sitting in a corner like a monkey   . . .

In this frantic condition they were confined, lest they should, in their folly, destroy themselves--though it was observed that all their actions were full of innocence and good nature. . .a thousand such simple tricks they played, and after eleven days returned to themselves again, not remembering anything that had passed."

(From The History and Present State of Virginia, Book II-1705 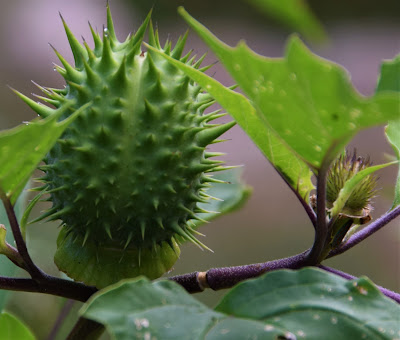 Its poisonous ingredients include atropine, scopolomine, hyoscyamine, and tryopane alkaloids.

A perfect plant for a witch's garden.  Maybe between to the foxglove and deadly nightshade . . . 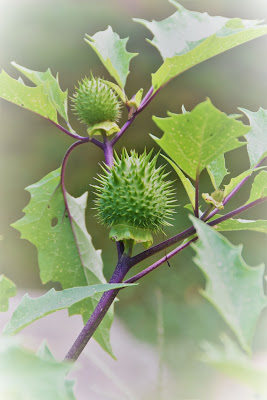 Oh goodie...something for those who don't have as much imagination as you already have. I don't see you needing hallucinogens of any kind! Not that you sit in a corner naked like a monkey, of course.

I am blown away. I had no idea that jimsonweed was the same plant as the moonflower I like so much. I somehow thought jimsonweed was a plant found in the west. And to think I have grown it before, going out in the evening to see the flowers.

I'm not tempted either but the photos are very good! Have a wonderful day!

NCmountainwoman-- it's not the same moonflower that is similar to a morning glory. But as jimsonweed flowers open late, it's been called moon flower.

I know nature plays cruel games, making deadly things look beautiful on the outside, and I happen to think this is a perfect example. Full of drama in its glory, but holding a deadly secret for those unaware. The wonders of nature unfurled for all to see. I never tire of nature's intricate workings. I love when you share these kinds of shots! They make me FEEL SOMETHING, like good photography should.