Reading and Writing and Gardening

Some book pusher, probably Mario over on Facebook, recommended this book at sometime in the past and I promptly downloaded it to my Kindle and forgot about it. I noticed it a few days ago and, curious, read the first few pages. And kept reading. And kept reading.

I had spent a grueling previous day, organizing the rest of that Civil War novel, sketching out the remaining chapters, and reading through the great wad of research that was clogging the path between the first half of the book -- which is written in mostly coherent chapters -- and the second half -- which consists of half written scenes, notes and queries to myself, and more of this copied and pasted research.

My brain hurt and spending some time away from the Civil War and in a post-apocalyptic future was just what I needed. Tepper's novel reminds me a bit of THE HANDMAID'S TALE but it focuses on two very different societies. Women's Country, which appears to be based on the militaristic society of ancient Sparta (note that I said appears) and  Holyland -- which bears a lot of resemblance to some of the renegade polygamist sects still extant in out own country..

It's a terrific read with a surprising (to me, at least) twist. Warmly recommended -- and thanks to the book pusher who told me about it. 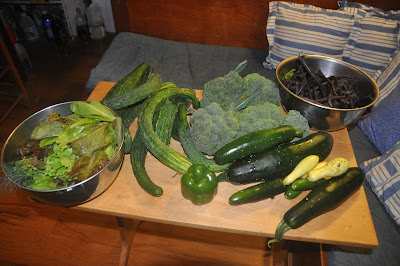 And then there was the garden. We've had almost daily rain and things are ripening apace -- crookneck and zucchini squash, broccoli, peppers, lettuce, and purple beans. Yesterday I picked the first tomato.

The game is very much afoot. Garden and put up veg by day; write after lunch and at night.  I'm working on the last five chapters -- as I know just what I want to say in them. When they are done to my satisfaction, I'll go back and  work my way toward them. 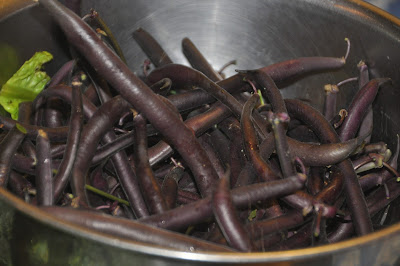 You didn't mention cooking in that mix, but I'm pretty sure some of that will be happening as well.

Thanks for the Civil War novel update. It sure is hard to get one's mind around everything.

Vicki, you've got quite a mix of activities this summer. Your energy is inspirational! Still, I do hope you've been able to allow some time for sitting on that porch. xo

I do love hearing how you put a book together. Writers amaze me with their talent.

My Kindle is full of books downloaded and forgotten. I'm going to have to quit buying books at the book store and work on the Kindle ones I've downloaded.

Glad to hear how you're piecing together your quilt/book. Sounds like it is coming along nicely!

For once, I plead innocence -- don't think I've ever read any book by Sheri Tepper. But you've now alerted me to the existence of this book, so I can now verify you were the guilty party this time. (^_-)

Whew! I'm just worn out listening to all your activity. Think I'll go take a nap and get up and do something. I know, I'll read a chapter in Alan Furst's WARSAW SPIES. I'm summer crazy lazy. Can't wait for your new book.

Full of admiration, here, as usual.