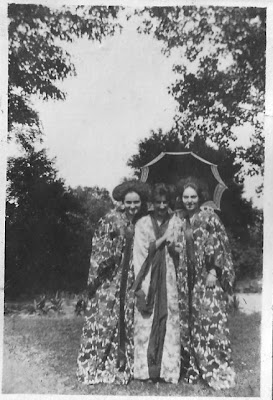 These three charming young women are my maternal grandmother Ruby Wright and her sisters, Mabel and Pearl. The time would be about 1908, the place Troy, Alabama.

So what are these southern belles doing posing in kimonos? 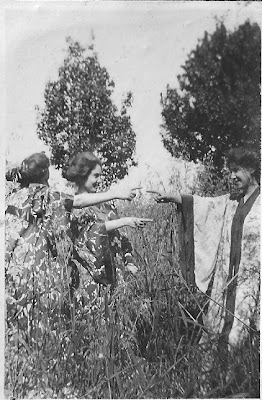 I'm speculating, of course, but I know that there was a craze for all things Japanese following the 1893 World Fair in Chicago, where a Japanese village introduced much of the western world to the mysterious land which had been closed to the outside till 1853.

And  then too, there was  The Mikado --possibly Gilbert and Sullivan's most popular operetta.  It was performed widely and its songs were well known -- even, I believe, in southern Alabama. 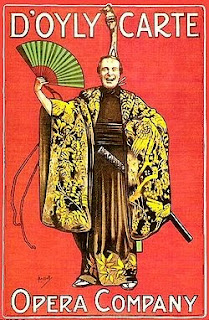 I like to think that Ruby and Mabel and Pearl were playing at being  the famous three little maids.


"Three little maids from school are we,
Pert as a schoolgirl well can be,
Filled to the brim with girlish glee ..."


And go HERE for a recipe for Japanese Fruitcake -- a popular Southern dessert in the early 1900's. 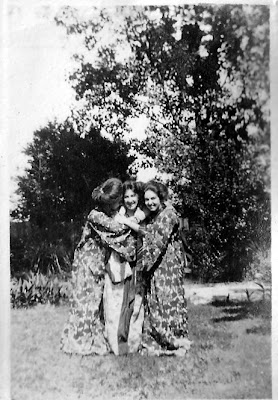 That was really fun, seeing the cute photos and the Gilbert and Sullivan music video, also.

They look like they are having a great time. And, Japanese fruit cake? You don't say.

What great photos. And that website about the history of various foods was really interesting. I just spent the last 15 minuted reading the whole thing!

Like you I pass a good deal of time speculating about people on old sepia photos. I like yours and probably you are right about your conclusion.
Have a nice weekend.

Would you believe your word verification today is cousn?

Great idea to give a legend to these photografs!
Charming and funny video .
The style of the make-up isn't very japanese!

Tracey -- There was nothing Japanese about the recipe. Possibly the cook who came up with it just wanted an exotic name and Japan was all the rage.

Yeah, I got sucked into that website myself, Victoria. Fascinating!

Thanks, Helene! By the way, I tried to leave a comment at your place yesterday -- on the dried petals post -- and it wouldn't post. Will try again.

Martin -- in the top picture, my grandmother Ruby is on the right. Pearl, with the enormous pompadour. is on the left and Mabel in the middle.

Miss Yves -- The Mikado -- in spite of the Japanese setting -- is the most English of operettas. Too silly!

They are charming and obviously have a lot of fun in those kimonos.

That was priceless. I love G&S also. What fun to speculate on what was going on. You can always spin a good yard for sure. Blessings
QMM

Thanks for Gilbert and Sullivan revisited. Cute picture of them having fun!

Love the print on those kimonos.

I remember these three from other photos you've posted. These girls KNEW how to have fun for sure!
What treasure to have all these wonderful photos!! :)

what fabulous photos!
thanks for sharing.

These pictures are wonderful...love the fun and happiness they show unlike most of the photos of that time which are still and somber. And I love their names!

Darling photos; immediately I wondered about the kimonos.

Thanks for the reminder about the Chicago World's Fair and the Mikado; hmmmmm wonder how that may relate to the Irwins and the Red Dragon Chair we inherited through them?

Enjoyed the photos and how you connected the dots of the story. And I'm REALLY impressed with those hairdos! It looks like the girls were having a great time that day.
Tammy

That was lovely! the three 'graces' look like they are having so much fun, even their hair is done up like three Japanese dolls

I have one stored away in a cedar trunk -- a beautiful Japanese wedding kimono,

Darling photos of a fun day. 'Girls just want to have fun', is certainly fitting here. The kimonos are so gorgeous! Fun post : )

Thanks, folks! I just love these pictures and wish I could have been there with the girls.

You may have a tie-in there, Pat!

Yes, Tammy, those are some impressive hair do's, especially Pearl's. I think they had little forms called 'rats' that they brushed their hair over.

Lucky you, Joanny, to have a real kimono. They are so very beautiful!

I think you're right... three little maids. They look like they were having a wonderful time.

Oh, Vickie, these are just delightful! Poetikat posted her three little maids a few weeks back. Similar pose and time period, since the G&S was so popular then.

Funny - I found some pics of my great aunties in kimonos in the photo album my grandfather kept. I thought it was amusing but never thought about it being a craze.

They were obviously having fun dressing up. What great photos you chose to share! And a little Gilbert & Sullivan to round out the day. Perfect!

Thanks, Willow -- I checked out Poetikat's post - Hilarious! I hadn't seen it as this in only my third Sepia Saturday.

You too, Meri? Do post them -- maybe it was something like poodle skirts or go-go boots or any fashion craze.

That's a neat piece of information about the Japanese fascination of the period--and charming photos of the three ladies!

Wow, this is only the third SS post I've been able to read today (tonight), and I'm really enjoying them.

What lifelike photos for the early 1900's...usually everyone is so pouty and stern, at least in my family. You must come from a line of bon vivants:)

what priceless and lovely photos!

I have some of a great-aunt with a very japanese parasol, but no matching kimono

I so like your approach to Sepia Saturday - letting an almost random old picture send you off in a handful of different directions. Entertainment, education and good writing at its best.

Adorable picture-they look like they're having fun whatever they're up too.

How wonderful! I love that they even emulated the Japanese hairdos. Great offering. Perhaps you have inherited a bit of your ancestors playfulness?

They are all so lovely and joyful. I adore these pictures. They even did up their hair, thick beautiful hair. I wonder if I'm the only one who feels nostalgic about names like Pearl, Mabel, and Ruby. I particularly like the name Mabel.

Thank you, Leah! A lot of art of the era was inspired by Japanese art -- I'm thinking of Whistler, in particular but there were many others.

Yes, Violet, those girls knew how to have fun. They continued to get together every summer for a vacation in Waynesville, NC. Their husbands played golf and the ladies played bridge and went antiquing. And I know they had fun!

Thank you, Lettuce! And Tipper!

C Hummel - I wish I'd inherited their hair.

Christine -- I was always very happy that I wasn't names for my grandmother. But now I see the charm of those names.