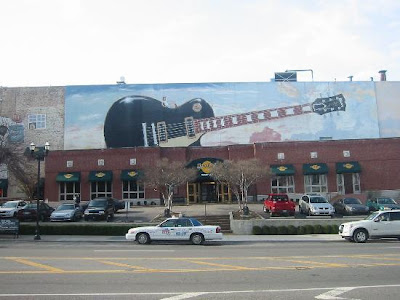 A few years ago I was in Nashville, Tennessee for a book festival. Nashville is, of course, a mecca for would-be country music singer/songwriters and almost as many kids walk around with guitar cases as with cell phones.
Their faces are full of dreams of making it big, of playing at the Ryman just like their heroes did before them.  Waylon, Dolly, Johnny, Willie, Merle, Hank, Loretta, Patsy -- and me . . . you can almost hear them thinking it. 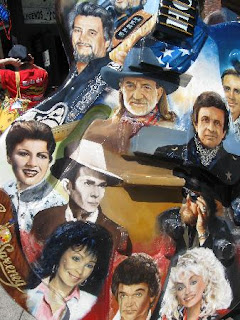 One morning I was witness  to a little taste of that dream. And it's stuck with me but I haven't found a place to use it --till now.
I was having breakfast in a bustling restaurant on a busy street corner. The owner/cook was a angry-looking Greek who tended to yell at the waitress in his native tongue. (But it was his Greek omelet that convinced me to skip the free pale coffee and greasy pastries offered at my hotel.) The place was packed with people who had the look of regulars.
My table was by the window and I looked up from my eggs with feta and onion and green pepper to see a young couple, both toting guitar cases and knapsacks, standing on the sidewalk deep in conversation.
They had that rumpled, sleepy, all-night-on-the-bus look and I was immediately convinced that they'd just arrived in search of their dream. 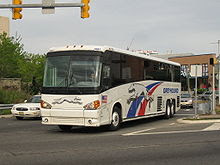 They talked a little longer and then the girl put down her stuff on the sidewalk. She smoothed her hair, tucked in her shirt, and gave a little shake as if preparing for something. Leaving the guy in charge of their gear, she came into the restaurant, marched up to the angry Greek (no question about who was in charge in this place) and asked for a job.
Oh, I was holding my breath. The A.G. looked down at her in some disdain but she stood her ground.
He motioned to the grill top. "Cook egg over easy."
Still intently following this unfolding drama, I watched as, with apparent total confidence, she moved behind the counter and began.
I couldn't see the grill top so I don't know exactly how it went. 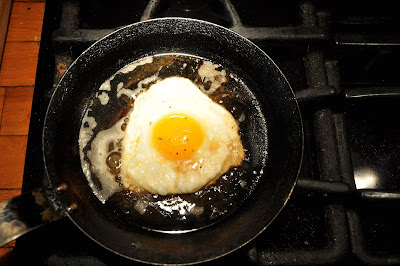 But it evidently didn't go well because in less than a minute, the A.G.shook his head and pitched the egg into the garbage.
The young woman squared her shoulders and left the restaurant. Outside, the two young people pulled back on their knapsacks, picked up their guitar cases, and moved off -- out of my sight, but they've never left my mind.

Somewhere I could hear the music playing ... something about a boulevard of broken yolks dreams. 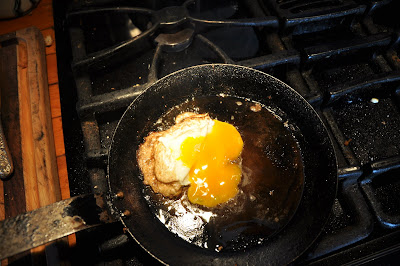 But that's a punk rock song. Here's a good old bluegrass song about how many guitar pickers there are in Nashville. (1,352.) -- You can go HERE for lyrics.

How bizarre! I had just finished posting on my blog about . . . well, you'll have to check it out . . . and then found your posting.

Coincidence? Or something else? Brrrrr!

By the way, that's a great story!

Slice of life! Those are the times I wish I had a lot of money and I could have invited them in for breakfast.

The closest I ever came to cooking in a restaurant was on a trip when I stopped for breakfast and only a waitress had showed up for work, I volunteered to help with breakfast. Thanks, but no thanks. I don't know how she did it, but she cook and served all the breakfasts.

To continue the 'country' theme, a few years ago we were at the Cambridge Folk Festival, expecting to see Lucinda Williams. It turned out, she couldn't fly due to an ear infection. So Laura Cantrell stood in at short notice. We weren't disappointed. She gave an outstanding performance. Later, I was fortunate enough to meet her and we chatted for quite a while. Not only a great talent, but a charming individual too.

What a fabulous story Vicki. I can't imagine witnessing it, but you wouldn't have been able to pry me out of that chair. Talk about being a "fly on the wall." Wow.

Hope you had a great St. Patrick's day. Please stop by my kitchen when you get a chance. I have something for you.
Sam

They may not have been successful, but they'll always remember how they tried to follow their dreams. I enjoyed the story. Was there a reason to write about it at this particular time?

I know what you mean, Callie. I'm a pretty good home cook but restaurant work would be nerve-wracking!

Martin - I sometimes forget that American country music is known world-wide. It seems so intensely local. But maybe you all felt that way about the Beatles. ;-)

Jean, I was just thinking about that story one morning while fixing breakfast and thought I'd use it as a blog post. Nothing to do with St. Patrick's Day.

Do you wonder where that couple might be now and how they're doing - are they still together - will one of them "make it," but not the other - will they give up the dream and settle for life as most of us know it without the spotlights?

I hope the couple found their star.

A great "Nashville" story, Vicki. And I'm glad to see you used Del McCoury, from down the road in Bakersville, N.C. for the video.

I've always looked at him as a musician's musician, one of the good ones who's never got the publicity he deserves.

Great story. You have to love the confidence of youth.

A long time ago my boyfriend (French) and I were in a small club in London for New Years Eve. The cook got very sick and left. The owner asked my boy friend and I, since we were the only two French people there and were supposed to know how to cook (not true) if we would cook the bacon and egg, baked beans and tomatoes breakfast for the little crowd. We said yes and it was fun. But not that much fun. Starting in the Fall we’ll be going often to Nashville. My youngest daughter has accepted a fellowship at Vanderbilt University and is moving there with husband and the two grandsons – it will be closer for us than driving to Columbus, Oh. I like bluegrass music a lot but not “country” music. There are some good bluegrass bands in Georgia too.

so lovely posts, so many great photographs (the shadowy birds are really gorgeous) but i am so busy. not only that my third book is still on its way to the printer's but i got a call for a fourth book!!!! help, shall i do it???? your post about lysistrata reminds me of a funny evening in a theatre in berlin (i was just less than 20 and hadn't a clue what it was all about!!!!)

I certainly have wondered, Kaye. I'm going to guess that they got menial day jobs and played in bars. One day someone in the bar like the sound of her voice and hired her as a backup singer for recording sessions. Her boyfriend took to drinking and eventually they split up and he went back to Tifton, GA. where he has married and is partners on his father-in-law's peanut farm. He still plays music with some buddies at the annual Ruritan picnic.

She hasn't broken into the big time yet but makes a good living with her session work. She is married to a recording engineer and they have twin girls who she is starting to put into baby beauty pageants. She also sells Mary Kay and has almost earned a pink Cadillac.

Tipper, We have a neighbor who's a good musician but our family is lacking in that talent. I couldn't carry a tune in a bucket. I envy you for musical heritage.

Hey, Bo, Yeah, Del McCoury is one of the good uns, for sure.

You know, Vagabonde, I think there are Bluegrass bands everywhere. Like the Kruger Brothers from Switzerland.

How wonderful that they want a fourth book, Eliane!