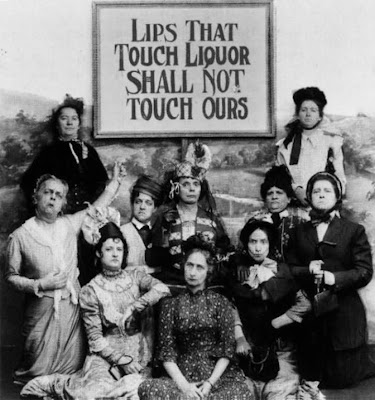 Those faces, said my husband, are enough to convince a man to keep drinking.

The picture came around in an email -- I don't know if it's an actual historic photo or a modern staged one.  But it must refer to the Women's Christian Temperance Union.

A far cry from the Baez sisters' anti-draft poster from the Sixties. 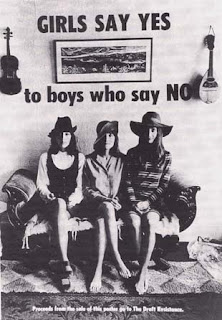 Is sex the oldest bargaining tool?
Back in ancient Greece, in 411B.C., Aristophanes wrote the exceedingly bawdy comedy, Lysistrata, in which the heroine convinced the women of Greece to withhold all sexual favors from the men until they ended the Peloponnesian War.


Nothing new under the sun. 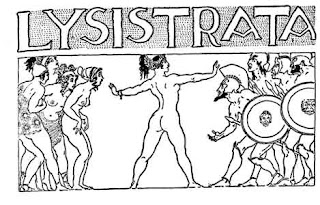 Ha ha ha what fun for a Monday morning! I would agree with the first one, although one look at their faces would turn the men off anyway, wouldn't they!
Blessings, Star

I agree with your husband. You could take that first picture with you to the pub. When the women started to look appealing, you'd know it was time to stop drinking!

That was funny! I love the way you connect things together. I never saw the Baez poster, but I listened to Joan Baez a lot. She was such a good voice for those times.

Those faces are, indeed, less than appealing. Kind of counter-productive, in fact.

In Lysistrate, the women make a point of looking as attractive as possible (Powdered, perfumed, and depilated, in one translation) -- as they deny sex to their warlike mates.

Not so unusual really, when you consider that women had little else to bargain with.

The first looks like a staged photo to me, but if it isn't... I wonder if the women were more attractive before their drunken husbands lost their jobs and started knocking the wives around. Not too many wives then or now go very far out of their way to put a damper on the husbands good times, unless it means really bad times for the wife and kids.

Kind of a degrading topic for women.
Marnie

Good point, Marnie. And there are those who would claim that marriage is degrading too, a form of prostitution-- women trading their bodies for security.

And of course, when the man is larger and stronger, a simple no wouldn't be enough.This bargaining tool works only in relatively civilized societies. And, as you say, often the woman has little else to bargain with.

I don't approve or disapprove of these tactics -- I'm just fascinated by their prevalence.

Jeepers. I think that may be a staged photo. What a bunch of old sourpusses. Who whould want to kiss any of them?

This is pretty relevant to me since the county seat is going to have a referendum soon to allow the sale of liquor inside the city limits. Formerly, we were surrounded by other "dry" counties, but they both have recently voted alcohol in. We're hoping that our county seat will pass this referendum, since there is a lot of retail leakage going to the surrounding counties now--affecting especially our grocery stores.
Deana

Yeah, I thought it might be staged too, Hazel. Kind of over the top.

We were one of those dry counties, Deana, and what a pleasure it was to be able to buy wine in the local grocery store rather than schlepping to Weaverville!

It's an unfortunate fact that some folks can't handle alcohol and shouldn't drink. But there are plenty of us who for years have enjoyed wine with meals and the occasional social drink without falling into the gutter or abusing our loved ones.

Cute pic-I think you're right it is the oldest bargaining tool.

There's a country song that includes the line "The girls all get prettier at closing time", which in my bar tending days must've been true from the last-minute pairing ups I witnessed at Last Call. So I can't say UGLY would be an incentive to keep the cork in the bottle.

On the other hand, withholding sex is how Anne Boleyn forced Henry VIII to dump Wife #1 and found the Church of England. Which I suppose shows just how gullible (some) men are. :)

Good point, JamaGenie! And re Henry VIII, I wonder how many more political decisions may have been influenced by that particular bargaining tool.