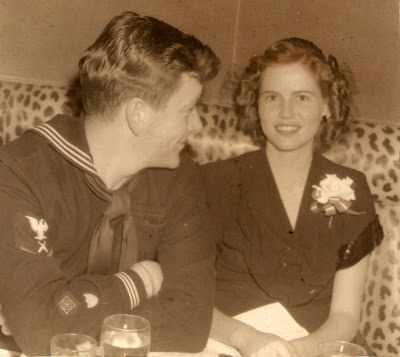 My husband's parents in 1945.  So handsome, so pretty -- and I love the way he's looking at her.  They'd been married about four years . . . and they would have almost forty years together before his death.

Jack was in the Coast Guard and a part of the occupying forces in Japan. He told a story of a man trying to give him a baby girl because he couldn't afford to feed all his children.

Of course, being in the military, there was no way Jack could take the child and he always wondered if she had survived. 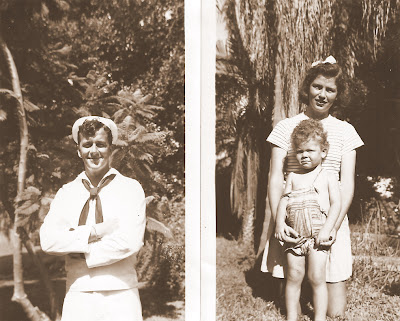 The curly-haired child is my husband John -- Johnny back then.
And this is Johnny, about three, being given his new sister  Genie to hold. The look of pure joy on his face is such a delight! 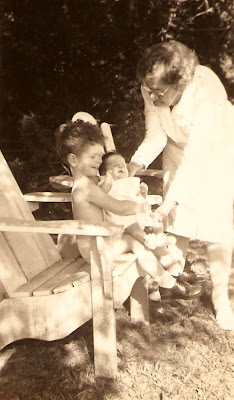 I expect the lady in white is a 'practical nurse' -- the sort who used to stay with new mothers, sometimes for weeks, back in the days when these new mothers were treated like invalids and kept in bed for weeks.
There would be two more children four years later -- Fay and Peter, the twins.
And Genie would die at twelve, the result of a horseback riding accident and nothing would ever be the same for Frannie.
That makes these early pictures especially poignant to me.
Go HERE for more Sepia Saturday posts. 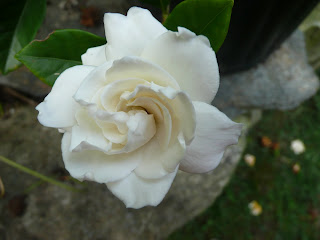 Jack and Frannie certainly were a handsome couple, Vicki. I always note the expressions of people in photographs and those pictured here are delightful. Jack looks as though he's just stepped off the set of South Pacific!

So sad to learn of Genie's tragic end, and the heartbreak that followed.

What a beautiful, touching story of love, family and heartbreak.

I loved the photographs and loved the story. Nice post.

Martin -- Jack was a handsome man all his life. When first out of the Coast Guard, he worked at an ad agency as a commercial artist but was often tapped to serve as a model. Family lore says that he was once in a Coca-Cola ad, I think in his sailor uniform.

Thanks, Pat and Carol!

Wonderful story but what a tragedy for Frannie. After I finished reading I went back to look at that first photo of her so young and happy with all her future ahead of her.

We never know. But this was a great post.

Such tender photos and such a bittersweetness in the knowledge of Genie's death. I really enjoyed the relating of the stories behind these, Vicki. Your husband was a sweet looking little boy.

Thanks, folks -- there's another Genie in the family now -- Peter, Genie's younger brother, named his daughter (no a young lady and a makeup artist in Hollywood) Genie. And this Genie looks a whole lot like Frannie.

That leopard print vinyl your husband's parents are sitting on in the first photo is fabulous!!! What a gorgeous couple.

So proud and handsome in the uniform in the second photo.

Johnny holding Genie. I love the look on his face.

a poignant tale, the memories of which provoked by a photograph.
Old photographs are a treasure trove and I wonder if future generations will bother looking at computer screens for their memories.

this was deeply touching -- thank you for sharing...
...rob
Image & Verse

Friko's comment makes me wonder. Maybe I should start printing out some of my favorite current pictures and make an album. Hmm. Or will future generations have forgotten how to turn pages?

Beautiful pictures and story. I did tear up about Genie though. It really is often poignant to look back at these old photos, as we know the tragedies they will happen upon during their lives.
Tammy

You have a great view of the family tree there. It is always a life changing thing to loose a child. My Aunt and Uncle lost an only child to drowning and they never really survived it. Nice writing and great pictures too.

Jack and Frannie's Pose Is So Open & Relaxed. They Seem Comforable With Each Other And With Life.

Thank you for showing these photos! They remind me of my youth and my parents when they were young. Great idea Vicki to put some forsythia branches in your house. They create spring inside your home.

What a great story. I had practical nurses with me for my first 3 children, by the time we 4,5,6 we could not afford them any long. Didn't really need them any way it was just the way it was don. Love SS
QMM

Right you are, Tammy! But it's so nice to think of the moments of perfect happiness they did have.

LD - A terrible, out of the order of nature thing to happen.Small wonder so many people never really recover.

Tony -- I love that first picture for exactly that.

You're welcome, Wil! And thank you for reminding me about forcing some blooms!

Things change, don't they, QMMM? My first child was born in '72 and it seems like things had changed by then -- not that we could have afforded a practical nurse anyway. No, even with a c-section, they had me out of bed and walking (hobbling) the next day.

Happy First Day of Spring!
Thank you for sharing the photos. Someone was a wonder photographer to catch all those expressions.

Wonderful photos, Vicki, and what a heartbreaking story. I love the first photo ... such great expressions.

If we know someone -- a parent or grandparent, for example -- and we've only ever known them as "older" we tend to think they've always been that way. We forget that they were young once, just as we were. Photos like these are a fantastic reminder that those older folks were indeed young and carefree and full of life, just like us.

Is Frannie still with you?

Thanks, Callie. They really are great captures!

You're so right, Patty -- that's what I love about these old pictures.

Frances (by the time I knew her, only a few people called her Frannie) died in 1987. She was living in a house she'd had built on our farm. She had been a life-long smoker, alas, and she died of emphysema.

What a beautiful photo of a happy day in their lives to launch the story. I was not aware that some new mothers had "practical nurses" helping out. I relate to the loss of a child.

I am loving these Sepia Saturdays and enjoying everyone's tales and photos. But it is taking more than a moment or two to get htrough them all.

Jack and Frannie...what a beautiful couple. They must have been so heartbroken when genie died. Hard to even imagine how difficult that must have been.

We are a lucky generation, we who can reach back and take a leading role in such "old" photographs and still be able to commit such memories to the most advanced digital recording media of the 21st century. Whereas we look back on the old photos of previous generations, our children will be able to look back at our blogs.

Lovely iconographically classic pictures of your family Willow. When I look at these beautiful family photos I am reminded of my own history because your relatives look like mine! Honestly, there is so much striking similarity between people, families. When I think of our life stories through looking through these windows of time I sense these old photographs are awakening me to how it was back then, in the day. I am reminded of how much we change yet somehow and amazingly stay the same. Is it Saturday already? Zippity - where'd the week go?

oops I meant to say Vicki...Are you related to Willow? Somehow I see a family resemblance? Maybe just in the tonality of the sepia print. In a way we are all related...this I find beautiful! Thank-you Vicki!

Pat in MN -- the practical nurses thing was back in my mother's day -- the forties.

Chiccoreal --no I'm not Willow, but am honored to be confuses with her, however briefly.

It makes me sad to think that Jack and Frannie's lives were not always idyllic. Poor Frannie, to lose a young child, it must be so hard on both parents, but a mother especially.

That's a beautiful, in parts sad, family history that you have shared with us, Vicki. Thank you.