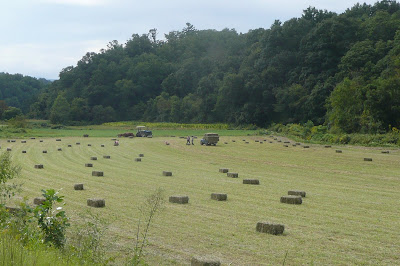 Harvest in these hills goes beyond the tomatoes and corn and beans and peppers that have flowed into my kitchen in the past month. It's time for the second (and last) hay cutting and baling.

As I drove past this bottom where a baler had been at work, I slowed to breathe in the fragrance of the new-mown hay -- one of the joys of the season -- and my eye was caught by the sight of three children, running from bale to bale in some game of their own. They ran and spun and twirled, drunk with the delight and freedom of the open space . . . maybe like me, intoxicated by the perfume of the hay. 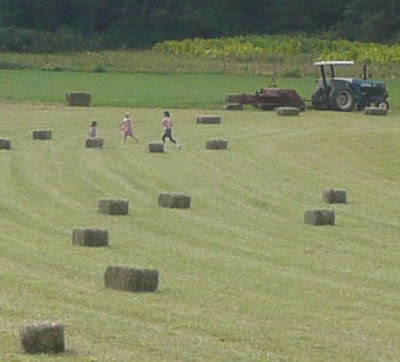 And there's the tobacco harvest. Not what it once was, when there were government price supports and every small farmer had a little field or two of 'green gold.'

Now only a few large farmers grow tobacco. And though I hate the smell of cigarettes, the resiny aroma of ripe tobacco makes me nostalgic for the days we grew it. 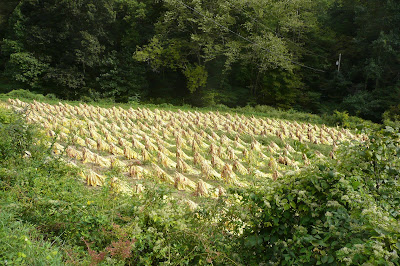 As I've said before, the sight of cut tobacco in the fields always makes me think of hundreds of ladies in their trailing ball gowns, lined up and pacing through the measures of a stately dance. Possibly to the strains of Kurt Weil's "September Song." 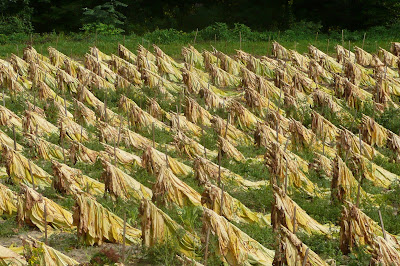 I came here after reading your interesting profile in Vagabonde's blog. I love a good mystery book, so I am ordering two of yours from Amazon.com.uk.
I have now enjoyed several of your past entries, love the way you write, the way you see things, and the images you post.
I live in Madrid, but have spent summer in Portugal. I am a painter and a writer and illustrator of children's books.
I am very glad to have "met" you.

Hi Vicki, I love harvest time, I have never seen tobacco like that in the field, it looks amazing, almost ghostly. Molly looks content, and seems so loyal to you, and it was wonderful for Eileen to know that you could take her to live with you. I am so looking forward to seeing the movie Julie and Julia, reading the story of your early married life was really interesting. I am visiting my daughter in England next weekend going to a country fair and a car boot sale. Hugs, Margie.

Hi Vicki, I love harvest time, I have never seen tobacco like that in the field, it looks amazing, almost ghostly. Molly looks content, and seems so loyal to you, and it was wonderful for Eileen to know that you could take her to live with you. I am so looking forward to seeing the movie Julie and Julia, reading the story of your early married life was really interesting. I am visiting my daughter in England next weekend going to a country fair and a car boot sale. Hugs, Margie.

They made hay in the field next to me yesterday, and ooooh yes, that smell is intoxicating!

Tobacco fields are few and far between anymore, but I do remember the days when everyone had some kind of allotment.

One of the things I miss most about our farm in Tennesse was in the autumn the farmers had their barns full of tobacco curing. That is the best smell ever!We didn't grow it but everyone around us did!

Welcome, Celeste! I've spent some time over at your blog (I could happily spend the rest of the day there -- such beautiful images!) I continue to be enthralled at this blog world and am so delighted to be a part of it. I hope you'll enjoy my books and that you'll visit often -- I know I'll be checking on your blog~

Margie -- There is such a lovely feel to the harvest -- all the work of the summer coming to fruition and the promise of rest ahead.

I'll look forward to your posts about the English country fair. I do love to travel this way!

Pat and Carol, I always say about tobacco -- I'm glad we did it; I'm glad we don't anymore -- those cold wet days in the casing house were perhaps my least favorite.

I have never seen tobacco stooks!
On the Eastern Shore they hung the leaves on wires, in straight lines. Travelling there many a tobacco barn stands abandoned, remnants of a bygone era. One hopes that the dwindling number of tobacco fields at least means fewer people ill from smoking realted diseases.

I earned some pocket money as a child by helping loading bales of straw (hay was harvested with one of those loading machines and not baled then). Hard work, even long-sleeved shirts would leave your skin with scratches and itches all over.

Hi, Merisi, This is burley tobacco which will be air-dried. It's very strong unlike that of the eastern shore which is flue-cured and (I think) often grown under shade cloth.

And though I'm nostalgic about the sight of the tobacco fields, I hate to think how many people will end up sick and/or dead because of it. Kind of like those lovely fields of opium poppies in Afghanistan.

Oh, yes, handling hay will make you itch! I've helped with loading bales also. But the smell of the hay is worth it!

I have a small flask of tobacco essential oil and I adore the fragrance even if I hate the smell of smoke from cigarettes. your tobacco ballerinas really look beautiful, great photograph!
PS the good thing about my lame line is that while I waited for your blog to open fully I mended a pocket and sewed a button onto my son's uniform pants (can you imagine how slow it is at the moment - better after the 15th of each month) cheers from rainy rural ireland eliane

Thank you, Flying Stars! I always enjoy your exotic and beautiful photos from India!

We used to have dial-up, Eliane. Slow as molasses (treacle) and I always kept a book handy to read while I waited for photos to load. Keeping a mending basket handy is a good idea!

Hello again, Vicki Lane. I am back to thank you for your visit and for your lovely comment. You are very kind.
I will be coming here often.