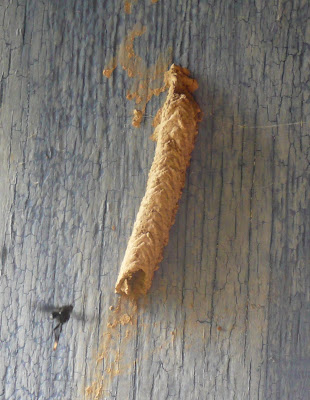 In our basement, the dirt daubers have been busy, getting ready for winter. These shiny black wasps are slim and elegant like all wasps but unlike paper wasps, dirt daubers (AKA mud daubers) are solitary and non-aggressive. This little lady is constructing a multi-chambered tube in which she will lay her eggs.

But first she'll go hunting for spiders, stuffing each chamber with a paralyzed spider (or several if they're small) on which she'll lay an egg. When the egg hatches, the larva will feed on fresh spider. Ahh, Nature red in tooth and claw! 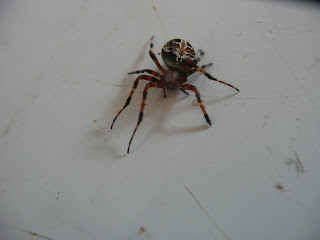 I hadn't known about this behavior till I checked out the link above, but it explains the spider I found near the dirt dauber's nest. I thought it was dead but when I nudged it into position to take a picture, the poor doomed arachnid moved, ever so slightly.

Evidently dirt daubers are especially fond of black widow spiders -- a good reason not to discourage them.

Another name for this black dirt dauber is Organ Pipe Mud dauber. You can see why from the picture below.

The holes are where the larvae, fat on their spidery provisions and metamorphosed into wasps have chewed their way out. The tubes are often reused -- by the wasps or by the practitioner of Appalachian folk medicine. 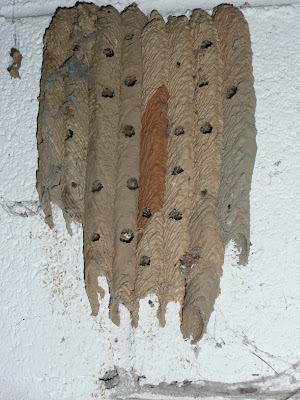 I learned this from Louise Freeman who was born and spent most of her life here on this farm.

Our first summer in the mountains we were camping out in the barn and our not-quite one year old had a bad case of diaper rash. I'd tried various powders and ointments but nothing was working.

Then Louise took over. She scraped a previously occupied dirt dauber's nest off the back porch wall, broke it up and picked out the remains of the larvae cases. 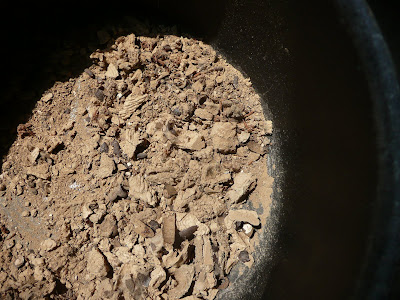 Next came grinding the hardened mud into powder. 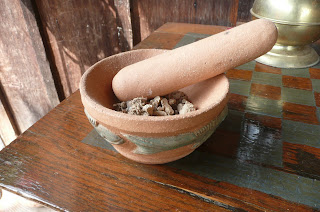 (I have a nifty mortar and pestle, made by the multi-talented Ellen Graf, author of The Natural Laws of Good Luck; I think Louise just used the bottom of a bottle.) 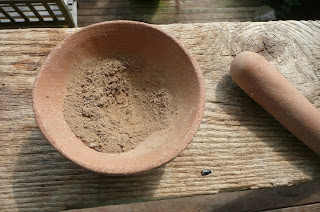 It's ground pretty fine but I'm going to put it through a strainer to get rid of any remaining spider bits. 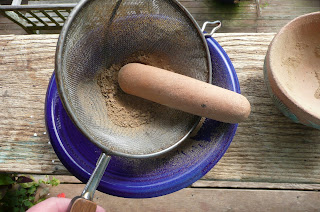 And voila! As fine as any dusting powder.

I put it on a square of loose woven linen (cotton would do fine -- an old handkerchief is perfect) and tie the fabric into a little bag. 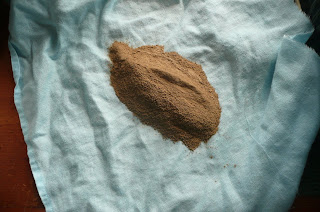 Perfect for powdering a baby bottom -- or anywhere on anyone who's suffering from heat rash --"galded" (galled) in the mountain term.

And yes, my baby's rash was gone the next day. 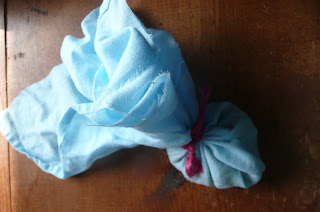 Now that was fascinating! I never heard that and I've read for years about all kinds of folk medicine!
This is one of the reasons I love blogging, it's like going to school! You are always learning new stuff!! :)

Oh yes, the mud daubers are quite busy right now and I find their 'nests' fasinating. I have never heard of of using it for anything .. how interesting!

Year back my DIL came home with a free puppy, who turned out to be a very sick puppy within a few days. An old timer told us to get an old wasp nest smoking and hold it under the pups nose so he could breath in the smoke, and sure enough, after doing that several times in a 24 hour period the pup was bouncing and happy and lived a long life!

Hi Vicki,
Came to visit via Celeste Maia's blog
really enjoyed this post, wonderful the powder cured the baby's rash.
Folk medicine has been used for thousands of years before drug companies and their attempt to get us all hooked on their franchise alone.
Thanks for the good read, hope your day is good.
Love,
Herrad

That is SO COOL.

Hi Vicki, first I was shying away from reading as I do not like to be around wasps, bees and hornets(even on line and very far away). I was glad that I persevered and found the old cure at the end. Thanks for posting. Hugs, Margie.

Those old timers knew a thing or two -- some of it was learned from the Cherokees, some was brought over from the Old Country. Some worked -- some didn't. But it was all they had for a long, long time.

Me too, Carol -- I love all the new things I learn every day.

Like this smoking wasp nest thing, Pat -- new to me!

Welcome, Herrad -- I'll be checking out your blog(s) -- so many of them. Which is the most active?

That's what I thought, estaminet!

Margie -- I'm glad you got through it! Are you bee-allergic?

My agent hates all insects -- finds even butterflies repulsive -- I, on the other hand, am fascinated by pretty much everything in Nature. I try note to post as many snake pictures as I take, knowing it makes some squeamish. But sometimes I just can't resist.

OMG! Talk about synchronicity, I just took some macro shots yesterday of some dirt dauber tubes on my back porch! I had no idea about the medicinal use. Fascinating.

No Vicki, I am not allergic, just have issues, as my father kept bees for years and invariably I was the one who got stung most often, and once who walked into a swarm on a tree. I love honey and love the idea of keeping bees but get the chills when I consider being near them. Hugs, Margie.

How very interesting! I'd never heard of dirt dauber before! I think their tubes are beautifully shaped. Thanks!

Fascinating! I never read anything like this and now I want to learn more and will investigate the links you gave. I always admire people who know so much about plants and medicine.
I also want to thank you for the tips on linking to the blogs. Oh these machines frustrate me so much at times. Remember Joseph Campbell, when asked what he thought of his computer, he answered something like "they are like gods from a first testament, all rules and no mercy..." That's it, my computer showed me no mercy.

We've watched the pipes growing for a couple of months now on the brick wall in the carport. The old man has been threatening to wash it down with a pressure sprayer. I promised him that she was carrying spiders in there to feed the babies when they developed. He hates spiders, so he let them be. He also hates the heat rash as bad as spiders. SO the next time he comes in after sweating all day on the tractor complaining the he's "galded", I'll have a surprise for him. Thanks, Vicki, for the natural remedy lesson.
-carol

Reader Wil -- I love the way they look and once let a dirt dauber build her nest in my kitchen near my sink. I enjoyed watching her and when the babies emerged the next year and flew out the window, only then did I scrape it away.

Celeste -- love the Joseph Campbell quote! I hadn't heard it but how true it is.

DISCLAIMER!!! Now Carol, you try this at your own risk -- or your husband's. The story I told is true -- my child's rash healed overnight. And I have used this powder myself -- never with ill effects but not always with such quick healing. Just so you know I'm not making a medical recommendation!!

(That should satisfy the legal department!)

Wonderful! I forgot to check for this and here it is. We always called them mud daubers but I love the name--what was it?--Organ Pipe Wasp? The same old granny who told my mother I had to drink catnip tea as a baby told her about grinding up dauber nests for diaper rash. Lordy.

No wonder that in the Dark Ages men grew afraid of women who knew these secrets and were able to heal people: Witchery they called it. Intelligence and mastery of nature's secret it was. Our poor foremothers!

BB -- So much neat old time stuff -- did you have a mole's foot in a little bag around your neck?

Merisi -- Absolutely -- witch was a synonym for wise woman. Today, they call a wise woman a bitch. Fear and ignorance at work still.

Dirt Daubers are my friend! ;-) I'm deathly scared of wasps, but I learned long ago that the daubers are a peaceful bunch. The more common ones around here, build just a round untidy looking nest, but the organ pipe variety are also in evidence. When I was a kid, I shared an upstairs room with my sister in our old house. We weren't the neatest, and the rooms were full of spiders. One day I knocked down a daubers nest on the old chimney and saw all the spiders. After finding out that they preyed on spiders, my peaceful alliance with them was sealed! Although I do feel for the spiders a bit... I sure did not know that the nests were used for medicinal purposes though!

Yeah, Tammy, I kinda feel for the spiders. But that's how nature is. And I've never been stung by a dirt dauber.

Another remedy I learned from my mother-in-law. If you have a spot that's swollen and inflamed then take a dirt dauber's nest and crush it, mix it up in vegetable shortening to make a paste. Put the paste on an affected area and protect it with a bandage so you don't accidentally wipe it off during the night. The next day the swelling will be down or gone completely.

Also I had a mild case of carpal tunnel yesterday and decided to try this remedy along with a brace. This morning my thumb is no longer numb.

I just found this while trying to find a home remedy from my childhood and it surprises me that no one has ever known of this simple but effective powder. I'm only 28 so its not like it came from the time of no hospitals. I suppose I'm just used to it because before going to the hospital my mother always took me to our local "herb man". As a child certain parts of my body were really sensitive to some lotions, soaps, ect. I couldn't, and still cannot, use arousal deodorants and for the longest time could only use Tussy (a brand of cream deodorant that came in a jar that you had to put on using your fingers). Well I always got a nasty rash under my arms that reminded me of when you would fall and scrap the skin off your leg with the smell and oozing that let you know it was healing (sorry if that's too graphic). At any rate, our herb man told my mother to go home and take a dirt dauber's nest, grind it up and apply it to my pits everyday until it was back to normally and it normally worked within a day or two (I often had to repeat it as I was finding out what I could and could not use). The one thing that people don't seem to know is that dirt daubers do not sting, because of this we had no short supply of nests. I didn't know they ate spiders and that's nice to know living in an area where the brown recluse is a native.

Thanks for the interesting comment, Gyana -- did you grow up in the Appalachians?