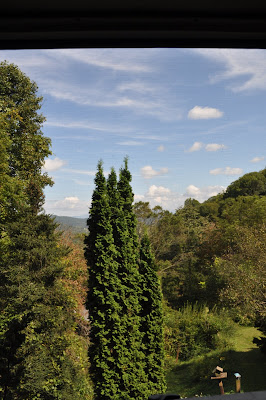 Yesterday's skies were blue and the air was dry -- though the ground squished beneath my feet as I went out to fill the bird feeder.

A fairy ring of mushrooms had sprung up in the pasture by the road. 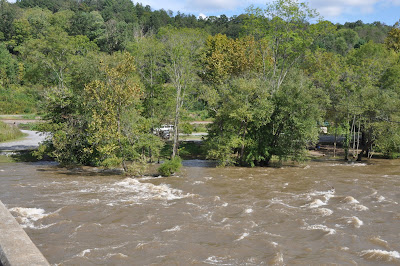 And as I crossed the bridge over the French Broad at Barnard (aka Gudger's Stand for those of you who read my books), I saw that the river had overflowed its bounds and was washing into the little park where the paddlers put in.

The river is so high that none of the usual rocks show -- though the white water hints at their presence just below the surface.

Some kayakers were in the park, getting ready to set out. They'll have a mighty quick trip down to Hot Springs on the wild waters. 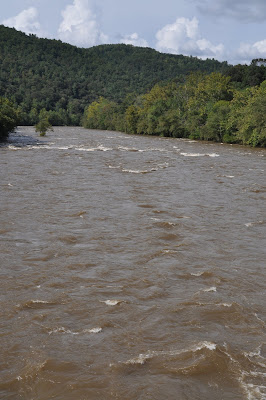 For those who emailed me to ask how Ethan and Aileen are doing in their new home near Atlanta where there's been so much flooding, the young uns are fine. Their house is on high ground -- but it took them an hour to get to work rather than the much shorter usual drive. Two bridges were closed and they had to go the long way round.

What an introduction to the joys of home-owning!

It was nice to see sunshine again and to have low humidity, although it was still in the upper 80's here yesterday .. still kind of toasty .. but that will change in the next day or two. Fall is on it's way!

Glad Ethan and Aileen are ok. Hope they are happy living/working in the Atlanta area, but bet they'll look forward to trips back to the mountains from time to time.

It's odd to have them away -- though they were home last weekend and will be back this Sat -- more packing to get ready for the movers. Then they'll really and truly be gone. Sad -- but how lucky they are to have jobs -- and in a field they love.

Hey Vicki, I've been playing hookey from the PC for a couple of days. It has rained everyday for 2 weeks. We have a few hours in the morning to get things done , then here we go. This will keep up at least through Saturday when a cool front comes in, then maybe it will dry out a little. I hear ya on the squishy ground!Well you know how I feel about driving in HotLanta! HA! When you're young nothing gets to you thank goodness!! I know you miss them!

Finally....the rain has gone, at least for the moment. We had house guests all weekend and then they got stuck in Atlanta at the airport on the way home. So glad to hear your family is okay down there. Awful weather.
Sam

Send some of those blue skies and dry air up this direction! :)

Thanks for the river pics, Vicki. When I see that spot, I think of Elizabeth and her near death experience that ended up with the Melungeons - I love that part! Yikes, those are brave souls to kayak the river when she looks like that. All that buried stuff in the river near Stackhouse. Glad to hear Ethan and Aileen are okay.

Hey, Carol, We're enjoying drying out a bit but more rain is in the forecast -- the afternoon showers thing.

Sam -- You know, I had no idea Atlanta was so hard hit till my sister-in-law called from VA to ask if Ethan and Aileen were okay.(I don't watch TV or pay much attention to the news.)Made me feel like a Bad Mother.

Let's send your rain west, Willow -- Victoria (Brushstrokes) in California needs it bad! She's where all the forest fires are.

You're welcome, Liz! Yeah, I thought about Elizabeth in that leaky raft too!

Glad to hear that Ethan and Aileen are ok!

Thanks for the rain thoughts, Vicki. It's so maddening to have one part of the country drowning in rain while the West burns for the lack of it.

Some good news, though. The arsonist who is responsible for several of the fires around here and down in Yucaipa has been caught. He is a 16 year old boy, who will possibly be tried as an adult, and was caught while trying to set yet another fire last night.