Molly, Julia and Julie, and a Tomato Tart 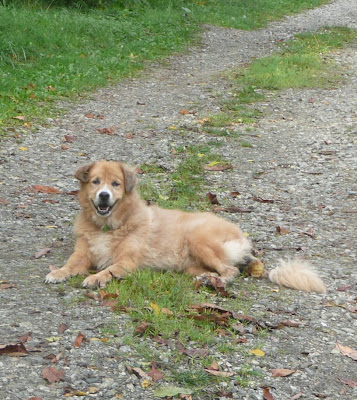 First of all, for those who asked after Eileen's old dog -- this is Molly yesterday. I haven't taken many pictures of her recently because she's looked so awful all summer due to my unsteady hand with the grooming shears. But she's getting a start on her winter coat now and looks better.

Molly's a sweetie -- she follows me pretty much everywhere, sleeps at the foot of the stairs to my workroom when I'm up there (her arthritis keeps her off the stairs), and when I go off in the car, she waits in the driveway till I return. 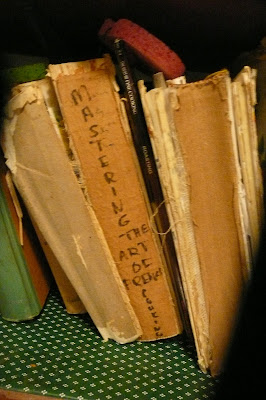 She waited while I drove off on Thursday and went with my friend Josie to see the movie Julie and Julia. This is something of an event -- I go to the movies maybe once every few years. But between so many good recommendations (thanks, Sam) and the fact that I, too, once spent an ungodly amount of time with Mastering the Art of French Cooking, I knew I needed to see this movie.

I first met Julia Child in 1964. John and I were newly wed, living in a tiny silver trailer up on blocks, in a trailer park of hundreds of other tiny silver trailers also up on blocks -- what was called, in the Marine Corps' straight-forward manner, 'sub-standard housing.' We had a small black and white TV and once a week, we watched Julia Child -- as much for the entertainment as for the cooking ideas.

My cooking was okay -- probably better than most young brides' at the time. I wasn't afraid to cook from scratch -- and I had some good family recipes plus the Tampa Junior League's The Gasparilla Cookbook (still in print and still one of my favorites -- I wore the first one out and am on my second copy) and a useful little item called Cooking for Two, the gift of a college friend (Susan T. from St. Louis who comments here now and again. An old friend ;-) 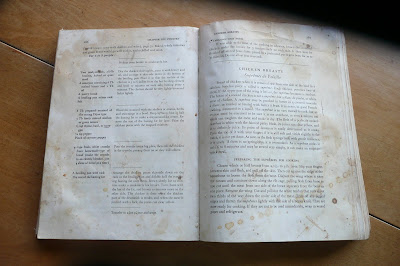 It wasn't till 1969 that I began to feel the need of something more and, accordingly, purchased a copy of Julia's great work, Mastering the Art of French Cooking. We were living in Iowa City while John attended grad school on the GI bill. I didn't have a job and I began seriously to try as many of the recipes in Mastering the Art as we could afford or find ingredients for. Lots of chicken -- not so much seafood. This was Iowa, after all.

I learned a lot about the various processes and sauces and I know that the time spent with Julia made me a better cook. I still go back to Mastering for favorites like Chicken a la Diable, Pork Chops Charcutiere, and, yes, Boeuf Bourguignon.

But back to the movie . . . it was wonderful.! The period clothing -- the hats, the heels, the suits -- all the cast, and, of course, Streep's bravura, over-the-top performance as Julia. (But then, Julia herself was over-the-top.) And I adored the woman who played Simone Beck. Really, they were all wonderful -- and I didn't find Julie 'whiny' as some crabby reviewers have complained (whined?) Really, really, I loved the movie.

Josie and I emerged from the theater, blinking in the late afternoon light. I had to do my grocery shopping and get home and fix dinner. But how, after this immersion in the food world, could I go home and do something ho-hum?

I remembered a recent post at Vicki Archer's "French Essence" blog. I already had the roasted tomatoes -- I've been roasting and freezing them for weeks now; all I needed was some tapenade or some Kalamata olive spread and some frozen (sorry, Julia) puff pastry sheets. Aha!

We had grilled chicken, a green salad, and the most decadently delicious and easy to make Tomato Tart imaginable! Go here for the recipe . . . and Bon Appetit! 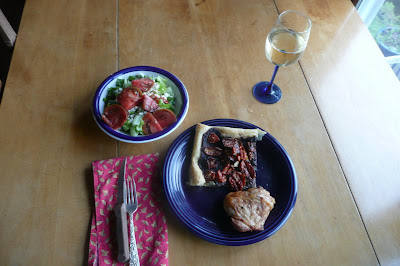 Vicki, what a nice tribute to Julia Child. She was one of the leading forces behind how I learned to cook. I'm so glad you enjoyed the movie. My husband went with me and we, like everyone in the audience, laughed all the way through.

Your tart from Vicki (French Essence) was a perfect dinner for after the movies, especially since you had already prepared the roasted tomatoes. I saw her recipe the other day and I want to try it. For French loves as we are, her site is drop dead gorgeous. I also have her beautiful book, My French Life.

Molly sounds like a wonderful dog and I'm so glad her pictures is here. One look and I can tell she is the perfect companion. Enjoy your weekend.
Sam

I've been meaning to go see this movie but like you I rarely go out to a movie,I can't even remember the last time or what the movie was.I love Meryl Streep and she is always fabulous in anything she does! You meal sounds great! Have a great weekend Vicki! :)

Nice post and making the acquantance of Julia Child! Your tart looked lovely and delicious!
Thanks for your visit. Have a great weekend!

I've got to say that tomato tart was a wonderful, mouth-filling combination of flavors and I am having to restrain myself from making another immediately. (I do have the other half of the jar of Kalamata spread and the other sheet of puff pastry. And beaucoup roasted tomatoes . . .)

Come to that, I'm ready to see the movie again.

Yes, Molly's a good old girl, Sam. She looks you in the eyes in a very human way.

Yes, Meryl Streep's incredible, Carol. And she seemed to be having a truly fun time with this role.

I just found your name from Reader Wil and came over to pay you a visit. You have a very interesting post and I’ll come back to read some more of them. My husband and I saw Julie and Julia two weeks ago. As you I bought her book back in the 60s. I was a young bride in San Francisco, fresh from my native France where most of the cooking was done by my mother and I knew what was good tasting but did not have the technique to know how to cook it. I shall be back.

Nice to meet another Julia fan!

I've been exploring your lovely blog and was interested to see that you visited Cherokee recently -- I've been wanting to get over that way myself again. I wrote about it in my third book OLD WOUNDS and hope to write about it in more detail in another book someday.

Vicki,
we had the Big Julia Night this past Thursday: My two daughters and my son and me (one daughter's not in V. right now, but she was the one who sent me the Youtube video of the trailer some time ago, saying "Mom, that is so you!"). O gosh, we all loved it! We were sitting in a small movie house, amongst mostly American expats, and felt right at home with them: Everybody laughed at the right spots! My kids joke that they were allowed to watch Mr. Roger's Neighborhood and Julia Child reruns when they were little (partly true, but they also watched Sesame Street and the fantastic "Reading Rainbow"). I watched with them and learned to cook with Julia (I always called her my American Mamma, because my mother had taught me how to eat well, but Julia was the one who taught me to cook!). I have two copies of the hardcover first volume, one from 1966,the other 1971, and a first edition of the second volume!
My very first Thanksgiving meal was prepared from Julia Child's recipes in an old Parade Magazine article!

It is amazing how Julia Child has become popular once again. Before the whole movie hoopla people sort of judged her too old-fashioned when I mentioned that she is my idol and all of a sudden she is all the rage again! Well deserved. I wished she could have lived to see it.

Among my Julia treasures is a type-written menu with recipes from her appearance at the Smithonian Institution on March 7, 1972. Five whole pages! After seeing the movie, I am convinced that she typed it. Julia forever! :-)

Only after sending off my comment did I read the previous comments: How interesting that I was not the only one who learned how to eat well at home, but how to cook with Julia! ;-)

What fun, Merisi, to think of all of us women in all different places with these ties to Julia!

And I must say a great big thank you to Julie, who brought her back in such a charming way!

Thanks for sharing this! How timely as I am currently reading Julie and Julia and have thought of you repeatedly, wondering if you have also picked it up at any point. My parents saw the movie and RAVED about it, so I am hoping to finish the book and take in the movie before the baby comes. Mom was so inspired after seeing the movie that she made an amazing Julia feast for Skip's birthday that concluded with a triple chocolate bombe that was hours and hours in the making (including making stencils and more) but really incredible...those of us that got to enjoy the fruits of her labor were delighted. I love that chefs seem to always inspire other chefs, the kitchen says no to no one! Thanks for sharing!

Amelia? When did you become wordswords?

Re birthday feast -- WOW! she WAS inspired!

Haven't read the book but I hope to . . . and maybe do some more Julia cooking.

Still on target for the 18th?