Got to Get Back to the Garden 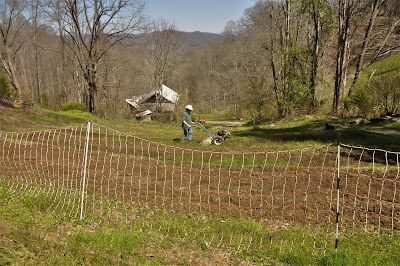 At long last, perfect weather in the 70's made it imperative to get into the garden. Time for some dirt therapy! On Thursday John fired up the tiller and attacked the tiers . . . 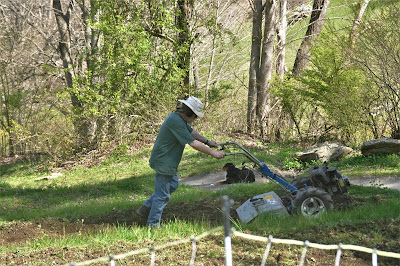 while I cleared off and weeded the asparagus bed. 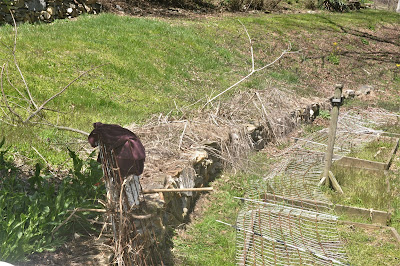 The end near the road wasn't too bad -- the horse radish is thriving . . . 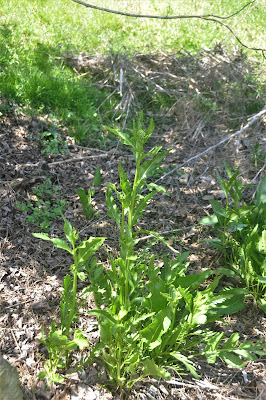 but the majority of the bed was covered in mats of  ground ivy, aka Glechona hederacea , Gill-over-the-ground, Creeping Charlie, Alehoof, Tunfoot, Catsfoot, Field Balm, or Runaway Robin. Whatever you call it, it smells minty and is fairly easy to pull.

It's non-native, having been brought from Europe by early settle for its culinary and medicinal uses. Wikipedia has quite a list of these. I have never tried any of them. 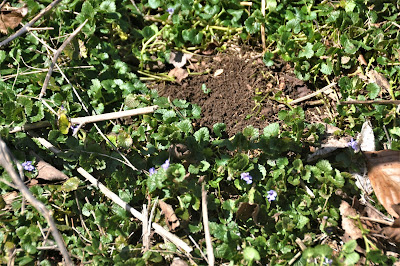 I weeded carefully around some catnip plants -- and harvested some for the kittehs . . . 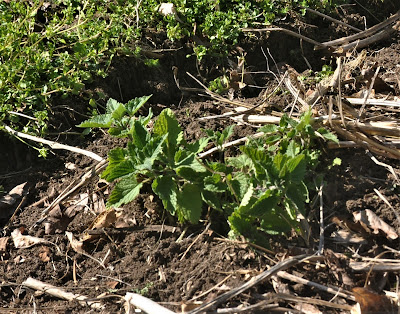 The finished bed -- not a thing of beauty -- except to me. Now if the asparagus would just begin to show itself. The ground is still pretty cool -- maybe these sunny days will get things moving. On Friday I tidied up the Creepy Garden that's at the front end of the asparagus bed -- the Black Pussy Willow needs pruning . . . 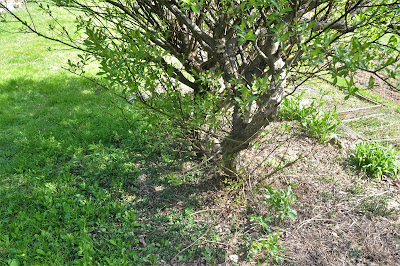 The concept of the Creepy Garden was to have plants with black or near-black foliage. I have some deep purple tulips and irises, as well as some black liriope. Also there are plants there because of their names -- spider plant, Voodoo lily (Arum Dracunculus aka Dog dick plant.) 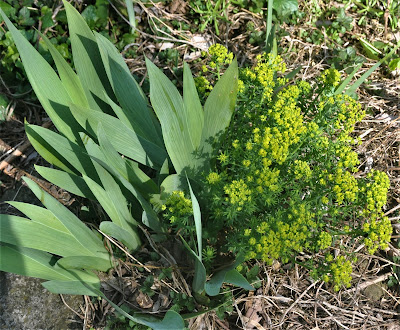 And there's some stuff there just to provide a contrast. 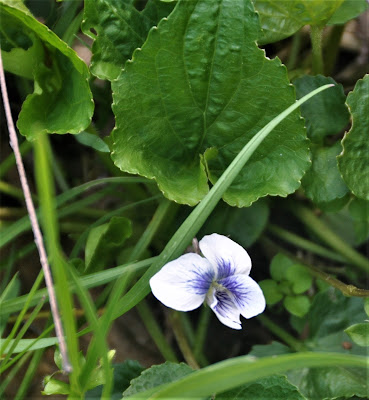 Confederate violets are like weeds at this time of year. And I was happy to find a Columbine that my sister-in-law Fay gave me several years ago was thriving. 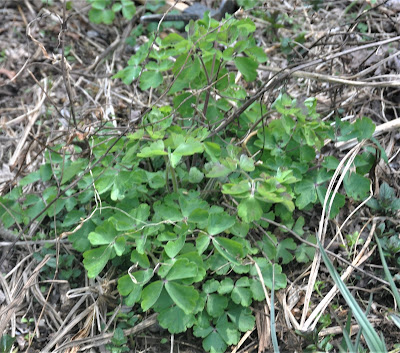 As are the Dog Dick plants --  which will be a trifecta of creepiness when they bloom: name, color(raw liver,) and fragrance (rotting meat.) 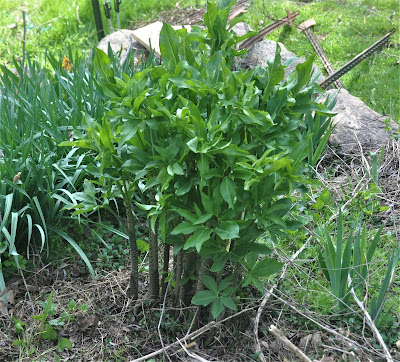 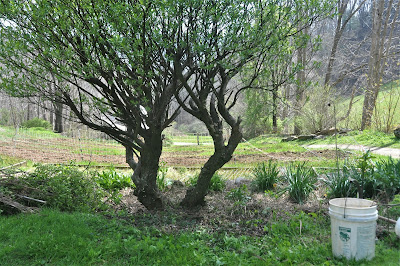 and moved on to the box beds -- John had weed-eaten and tilled four of the beds but the other four, with their perennial herbs, require hand weeding. 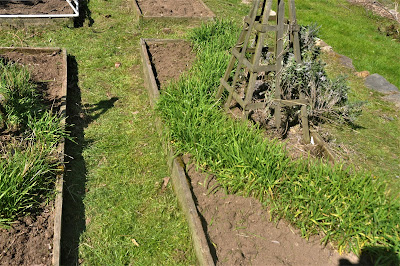 I made a start . . . but the beds at the far end and above the rock wall will have to wait  . . . Josie will be with me ton Saturday.  Soon, however, I'll get some seed sowed.

But the really good news for me is that, compared to last year at this time or even at the end of garden season -- I have a lot more stamina.  And, getting up from sitting on the ground, while still not pretty, is at least possible. Last year I was having to slither to the steps or a slope so I could get my feet downhill and attain verticality.  This year, I can kneel and then stand up! 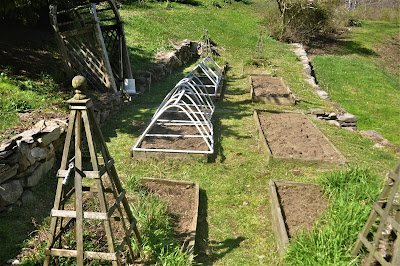 I'd say you have a lot of stamina, not a little. That seems like a heckuvalotta post-winter work.

Congrats on a job well done, and especially getting to your feet from the ground. I know how that's a challenge! Working on it!

I can just feel spring in these photos. How wonderful that you can be out and about in the garden, and get up from sitting! Have fun with Josie! That's another kind of gardening altogether, and another challenge for the knees! (At least it is for me when I have to get down on the ground and play with my grandchildren.)

Yes Vicki, Way to go. From on my knees to up and standing is a comical combination of grunting and groaning and staggering around. It's a circus clown act. Josie probably helped you exercise to achieve verticality.

Well, then I hate to snow on your parade but that is what it has been doing all day, here on the 16th of April.