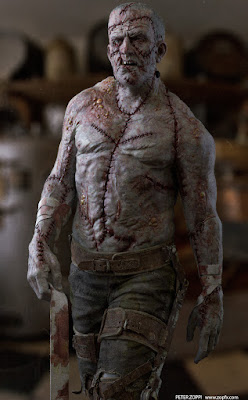 Senate Republicans have passed a Frankenstein's monster of a tax bill, hastily stitched together at the last minute -- so hastily that I doubt any of them had read the almost five hundred pages of giveaways (to the rich) and takeaways (from the poor.) Desperate for a victory, they delivered copies of the bill to the Senators too late for any careful perusal or even a cursory skimming.

. This 500-page bill is a massive tax giveaway to billionaires and giant corporations, paid for by America’s working families. It attacks college students. It sabotages the Affordable Care Act and threatens health care for millions of Americans. It opens up the Arctic National Wildlife Refuge for drilling in Alaska. And who knows what else is buried in there?

This Republican-controlled Congress doesn’t work for working families. It works for corporate lobbyists and campaign donors in backroom deals and 1:30 AM votes. This is corruption – plain and simple. And this corruption is hollowing out America’s middle class and tearing down our democracy.

But we cannot – CANNOT – give up. The other side has concentrated money and concentrated power – but we have our voices and our votes. And there are a lot more of us than there are of them.

We need to fight harder than ever to protect Medicare, Medicaid and Social Security. When this tax scam causes the national debt to explode because billionaires and giant corporations don’t pay their fair share, the Republicans will say – “Sorry!” There’s no money to pay for the things that affect working families. Remember that when the sequester cuts kicked in during 2013, cancer clinics had to turn away patients from their chemotherapy treatments – and that was just fine with the GOP.

The bill still has to be reconciled with the House bill  in conference committee and the new version voted on once more. And this is where all of us who care about the future of Medicare and Social Security, the ACA, the future of our National Parks , the future of our children and grandchildren -- to mention just a few of the things at stake -- should redouble our efforts to let our Congresspersons know they WILL be held accountable. Telephone, write, keep after them!

This is not over.  The fight continues. It will take 3 Republicans to kill the  monster.

And work to get the people responsible for the monster OUT when the time comes!

As the past year has shown, what's done in DC can be undone.

Good luck with that Vicki. We do get your news over here in England. It seems that Donald Trump is slowly, but surely, hanging himself with his own petard!

I'm too angry and disgusted to have words today.

So was I, Karen. Then a friend on FB wondered why there weren't more people expressing outrage. And I realized that we cannot allow ourselves to be stunned into submission. We must persist and resist and persist...

Thanks for this post, Vicki. We do need to stay active and not give up. 2018 is coming, and Mueller's investigation is progressing. There are things to be hopeful about.

So much that is hateful and outrageous going on, in the US and over here (UK) too. I agree. We have to keep shouting out.

I saw Warren's video. How can they get away with this?