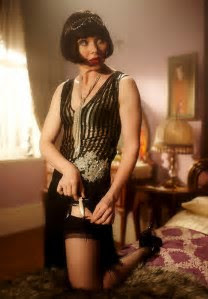 After viewing the all the seasons of Midsomer Murders (twice-- don't judge,) we found ourselves in need of similar light, comforting entertainment. Miss Fisher's Murder Mysteries, set in Australia in the Twenties, is filling the bill nicely.

I'd read and blogged about some of the books featuring the redoubtable Phryne and am pleased to find that the television series is as delightful as the books. Actually, more so because of the sets and the clothes -- oh, especially the clothes.

And the hats! I've never been a hat person, except for the utilitarian straw hat I wear in the garden. But these face framing cloches are gorgeous.

Of course, it helps to have the stylish bob, the cheekbones, and the perfectly made up face -- not something that's going to happen for me. Still, I can admire the look. 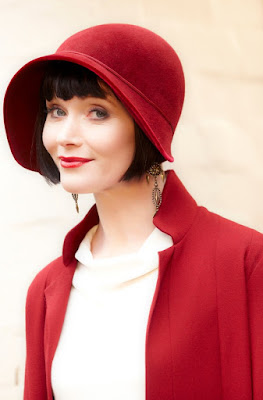 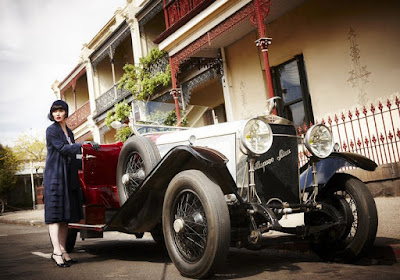 And like Nancy, Phryne is fearless and capable -- she carries a gold revolver, she flies a plane, she speaks French (having been an ambulance driver in France during WWI and later an artist's model in Paris,) and Mandarin Chinese.

We're not far into the series yet -- undoubtedly more talents will be revealed.

We saw this serie! ( my husband and myself) without having read the book.
I found it very pleasant -with a light touch of « « « féminisme »
and like you , I enjoyed the smart suits, the maje-up of the actress, and her look inspired by louise Brooks

And we are fond of « Midsomer murders », merely translated in french by »Inspecteur Barnaby »

I adore this series - both the books and the television series. I think I've seen the tv ones twice now when in particular need of escapism. Oh those clothes! And her lovely insouciance and confidence! It's great fun.

Yes yes yes, what you all have said about Phyrne. When reading, you don't know how to say her name...or at least I didn't. Then wham, the wonderful videos have everything so well pronounced...doesn't quite seem Australian to my ear, but then maybe it's my expectations. A true eye candy series for love of setting/props/costumes/hair/makeup/vehicles/planes/did I miss anything? Humor too!

We have also probably seen Midsommer twice and some episodes even more. Miss Fisher was fun too. I am currently listening to audiobooks -- Anna Travis Mysteries by Lynda Laplante (of Prime Suspect fame). Are you on Acorn? You might like the Brokenwood mysteries. They are just airing the newest episodes now, but there are a few older seasons.

My current favorite! I'm not as fond of murder mysteries as my husband is, but I watch it just for the clothes and her prissy sauciness. Complete escapism for me. Well done all the way around.

We simply love the life among the community of Midsomer County, my husband and I and we will check of course "Miss Fisher's Murder Mysteries".
You make it so "tantalizing".

I'm so happy you found the Miss Fisher series online! I've watched the series twice, maybe three times, and nearly enjoy it more with each passing! LOL (Although I never could get into the books for some reason.) As an aside, do you know about AcornTV? or is that how you are watching these? I've told hubby that it would be fine with me if we dumped Hulu and Netflix for a while because all I seem to watch are the series on AcornTV right now. ;)

Oh, and I totally agree with Anvilcloud ... I think Brokenwood is fabulous!

Oh yes what a wonderful character. Joan and I have watched them all. Another one we love is Dr. Blake mysteries. Australians know how to make great mysteries. Is it the English influence? Both have kept us entertained. I am going to look up acorn and see if I can get Brokenwood.
Here is one back for all of you. Arthur W Upfield's Napoleon Bonaparte Mysteries.
Published in the 1950's Bony is a detective and half breed with uncanny intelligence and dogged persistence. Wonderful descriptions of Australia's outback. One of my favorites.