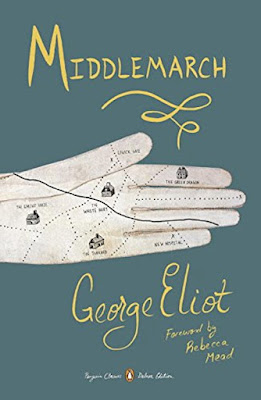 I've finished it and am glad I read it.  I admit to skimming over some especially lengthy bits of narrative but I was captured by the evolving stories of three more or less star-crossed couples and delighted by Eliot's sly depiction of various characters.

For example, two ladies talking of a third whose husband has been discovered to have some disgraceful secrets in his past:

"I should hardly think so," said Mrs. Tom Toller. "We hear that he is ill and has never stirred out of the house since the meeting on Thursday; but she was with her girls at church yesterday, and they had new Tuscan bonnets. Her own had a feather in it. I have never seen that her religion made any difference in her dress." 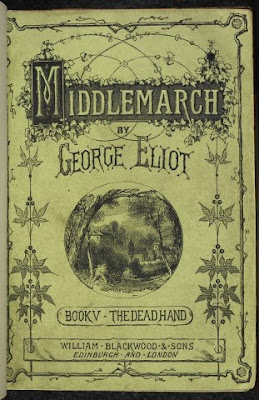 There are any number of little gems in the dialogue that I loved -- but I doubt that George Eliot, were she looking for publication today, would have an easy time of it. Tastes change and nowadays lengthy moralizing is generally frowned on.

And Dorothea's desire to subjugate herself to her elderly husband by becoming his amanuensis is fairly incomprehensible. (Now had there been chains, whips, and leather -- that might sell.)

It seems to me that the reading public's attention span is growing ever shorter. (I'm generalizing -- I know some still love lengthy tomes.) Is it the influence of texting and tweeting and social media of all sorts?

I know I find myself writing shorter paragraphs -- or rather, writing as I always have and then going back and seeing if that paragraph might read easier if it were broken in two.

Still, I'm going to continue to challenge myself by giving Mill of the Floss a whirl. Not immediately though. I need to reread Lev Grossman's The Magicians first. And I see that John has just downloaded Lee Child's Gone Tomorrow. It's been a while since I read a Reacher story. That will make an interesting change. 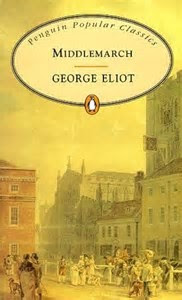 I do think people have shorter attention spans. But I think that it's not so much the attention span that is affecting what books people are willing to invest their time reading. It's more that there seems less time to set aside purely for reading pleasure. I do still read lengthy tomes and enjoy them immensely. But I also have at least one other book in progress. I recently finished Peter Matthiessen's SHADOW COUNTRY and enjoyed it very much. Last year I finished Ken Follett's Century Trilogy and before that his Kingsbridge Trilogy and thoroughly enjoyed them all. Right now I am re-reading LOOK HOMEWARD, ANGEL and once again I am entranced by the wordy but rich descriptions and well-written sentences and paragraphs. I think it does us good to turn away from the "quick" reads we enjoy so much and focus more on the substantial skills of a gifted author.

Of course, there are some "quick" reads by authors who put words together in a most wonderful fashion. Neil Gaiman comes immediately to mind as does Dave Eggers and Cormac McCarthy. I could go on. Oh, the truth of it is like the old saying, "so many books, so little time." I thought I would spend my retirement reading but there are just too many other things that demand my attention.

I wish I could feel more inclined to read MIDDLEMARCH after your review, but I rather got the feeling that you were more relieved to finish it than really enjoyed the reading. Glad you read it makes it sound something like a chore you finally got around to crossing off your list.

I was challenging myself to read something I'd hated years ago and, while it wasn't
t what I'd call riveting, I did care about the characters and wanted to see how things turned out. And really enjoyed the wry characterizations sprinkled throughout. But I much prefer Jane Austen.