The Cutshall Boys and the Florida Grass Widow 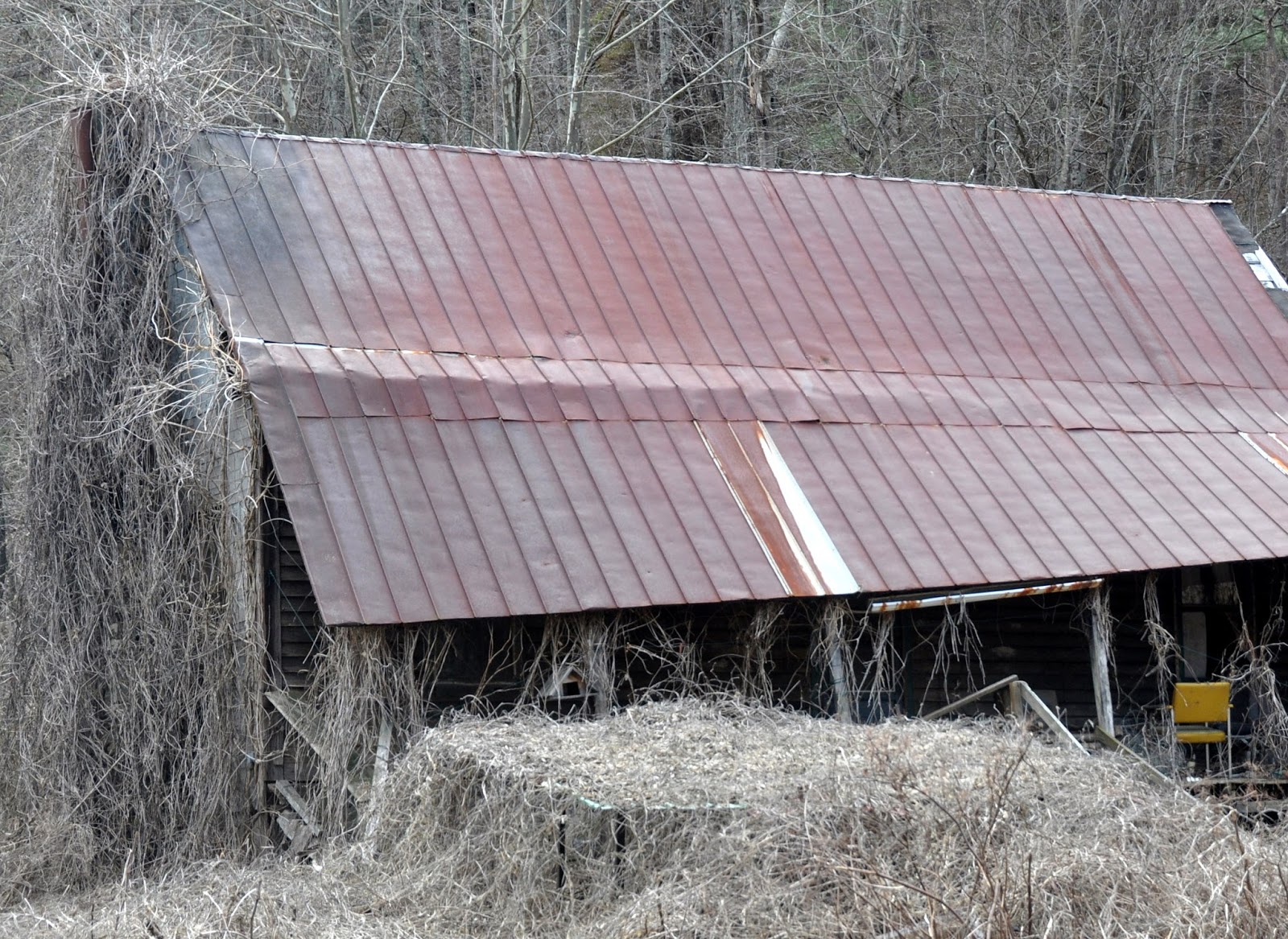 Oh, my, would you look at that. Pitiful sight, ain't it? Just pull off the road for a minute, if you don't care . . . Ay, law, I don't know how many years it's been since I come this way. I had heard something of what happened to the Cutshall boys but I never thought to see their place all overtook like this.

Is that an old beer carton there on the porch? Well, I ain't surprised a bit. They say it was the drink that was at the root of the trouble  -- drink and that grass widow from Florida. 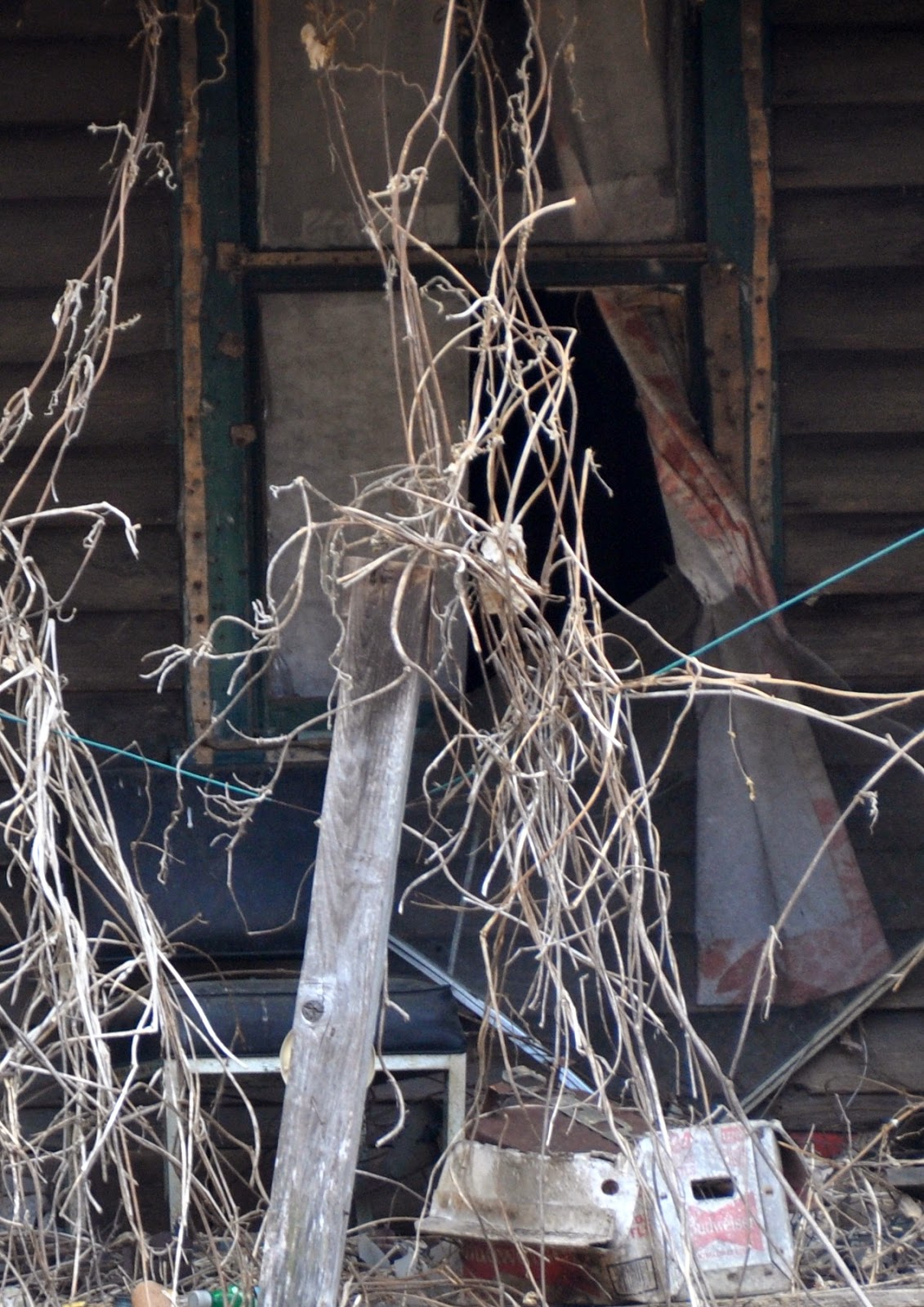 A grass widow? Why, honey, that's a woman who acts like she's a widow though her husband is alive and above the grass. Some is divorced -- they's an awful lot of those around -- and some has just walked away from a marriage without a divorce. I don't know which it was with the Florida woman.

The way I heard it was the Florida grass widow had her a job with the health department -- she was a nurse of some kind -- and she rented a little house down the road a piece from here.  My friend Viola knew her and said she was a friendly somebody from the first -- set in to going to church and to dinner at the Volunteer Fire Department and getting to know her neighbors all up and down the branch. She was no spring chicken but still a good looking woman up in her forties -- big bosoms and red hair that she wore  in a knot on top of her head.  I saw her once when I was at the dollar store with Viola and it was Viola who told me the whole story. 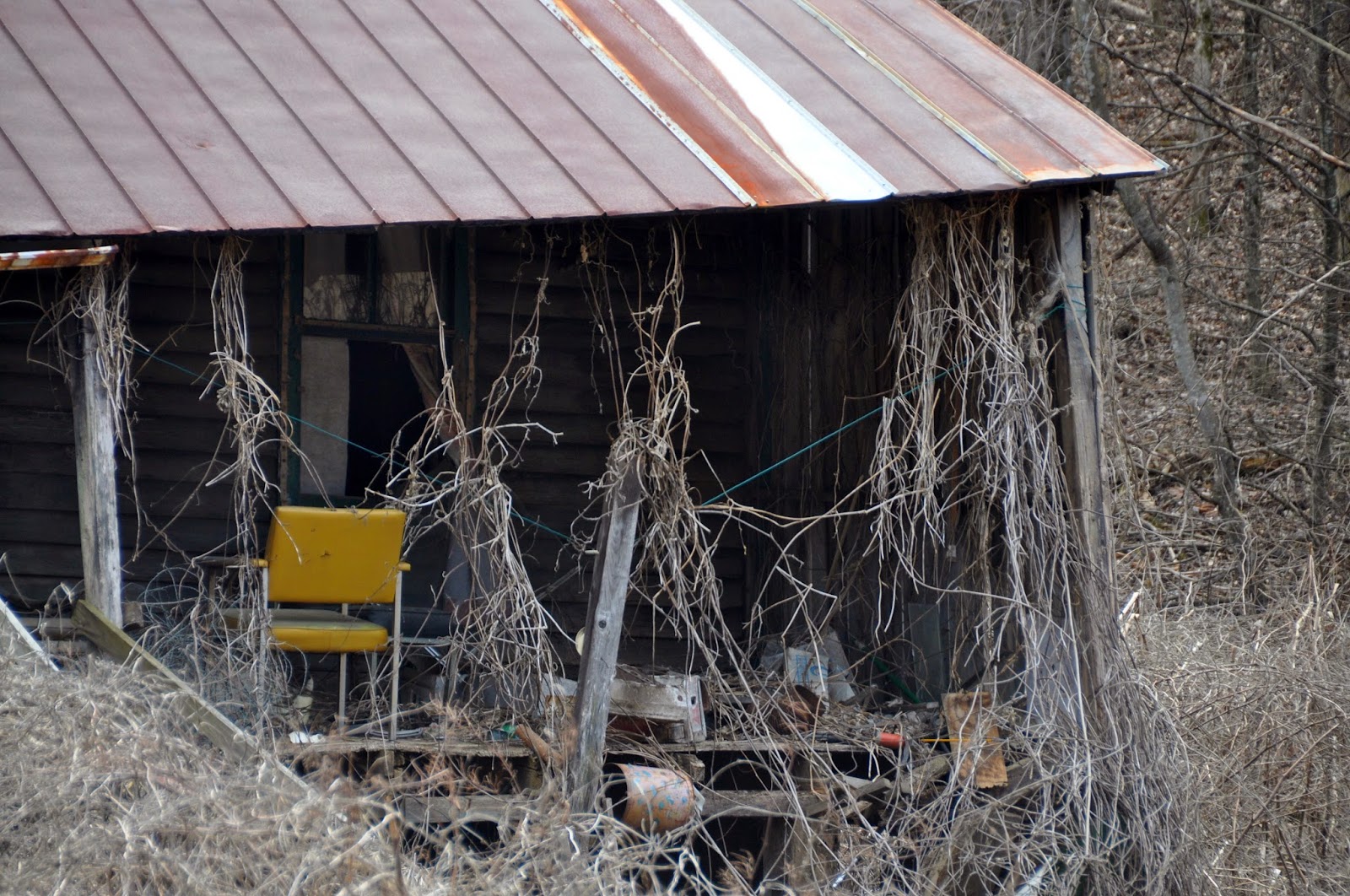 Now the Cutshall boys was two old bachelors. Walton and Dalton -- they was twins -- had lived right there in that house all the fifty-some years of their lives, farming and taking care of their old daddy till he died, and hadn't neither one of them ever had a thing to do with women. Just warn't interested, some said but others said that neither one would ever try to court a woman if his brother didn't give the go ahead. 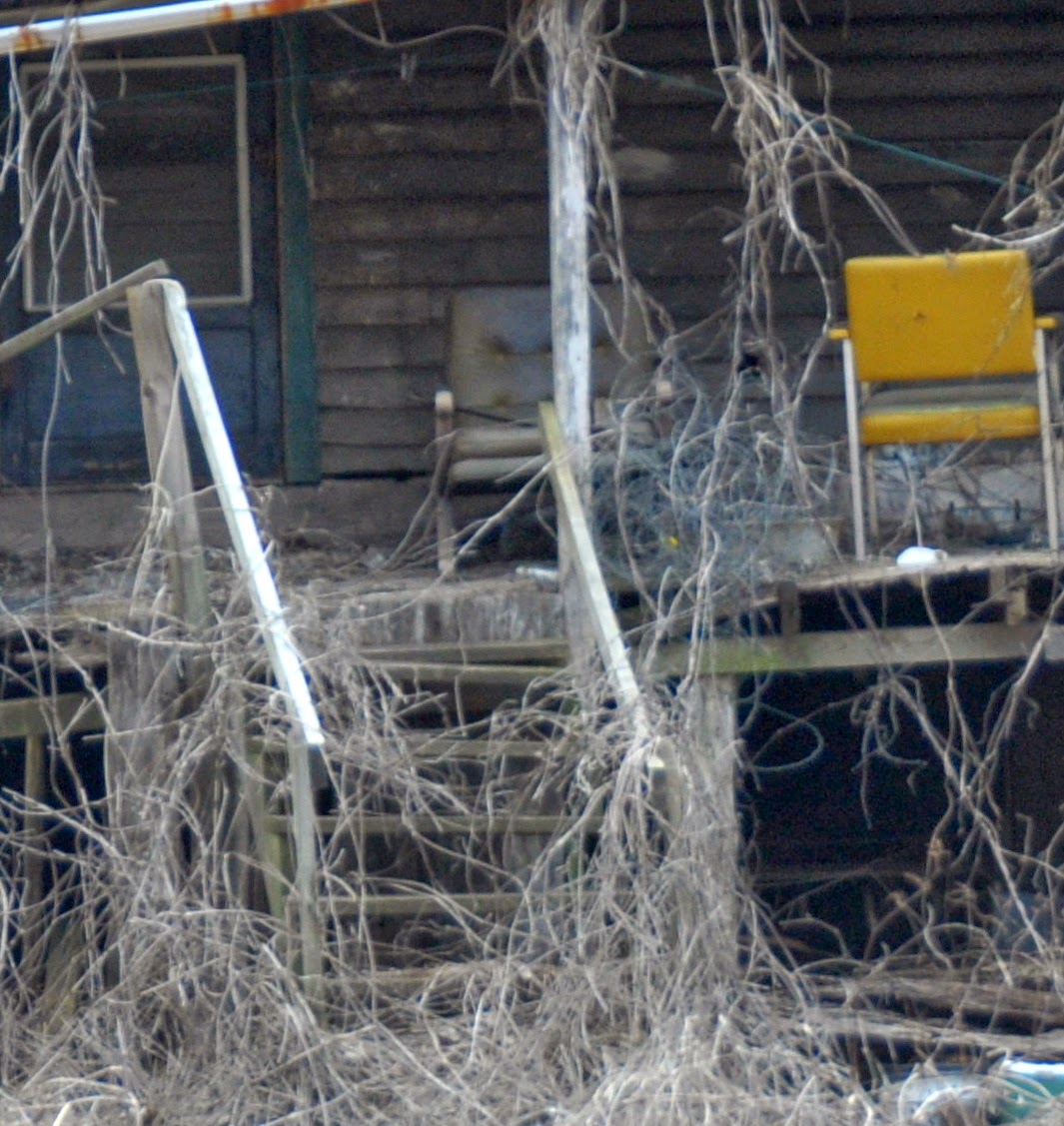 Howdy, hollers Dalton, or it could have been Walton, and before you could say knife, here comes the grass widow, hopping up on the porch with the little dog hopping right behind her.

Walton, or it could have been Dalton, gets up from his chair and tells her to set down and he gets a milk crate for himself.  The Cutshall boys don't hardly know what to say being as they ain't never had a strange woman on their porch, much less one from away, but it don't matter, the grass widow sets in to talking like one thing -- asking all kinds of questions and then she asks do they like to play music.

Well, that was all it took. The boys set in to telling her about how they had once played a set with Bill Monroe when he was in Asheville and how he had asked them to join up with his band but they couldn't an account of having to take care of their old daddy.  Then Dalton, or maybe Walton, goes into the house and comes out with a fiddle and a banjo and the Cutshall boys begin to pick and sing and afore long the grass widow joins in.

Viola said you could hear the music clear up to her house. She said they was singing "Farther Along We'll Know All About It" and that the grass widow's voice was just as sweet-

Oh, my, look at the time! Here I am keeping you from getting home and you with ice cream likely melting all over your groceries.  Let's drive on along and I'll tell you the rest as we go. 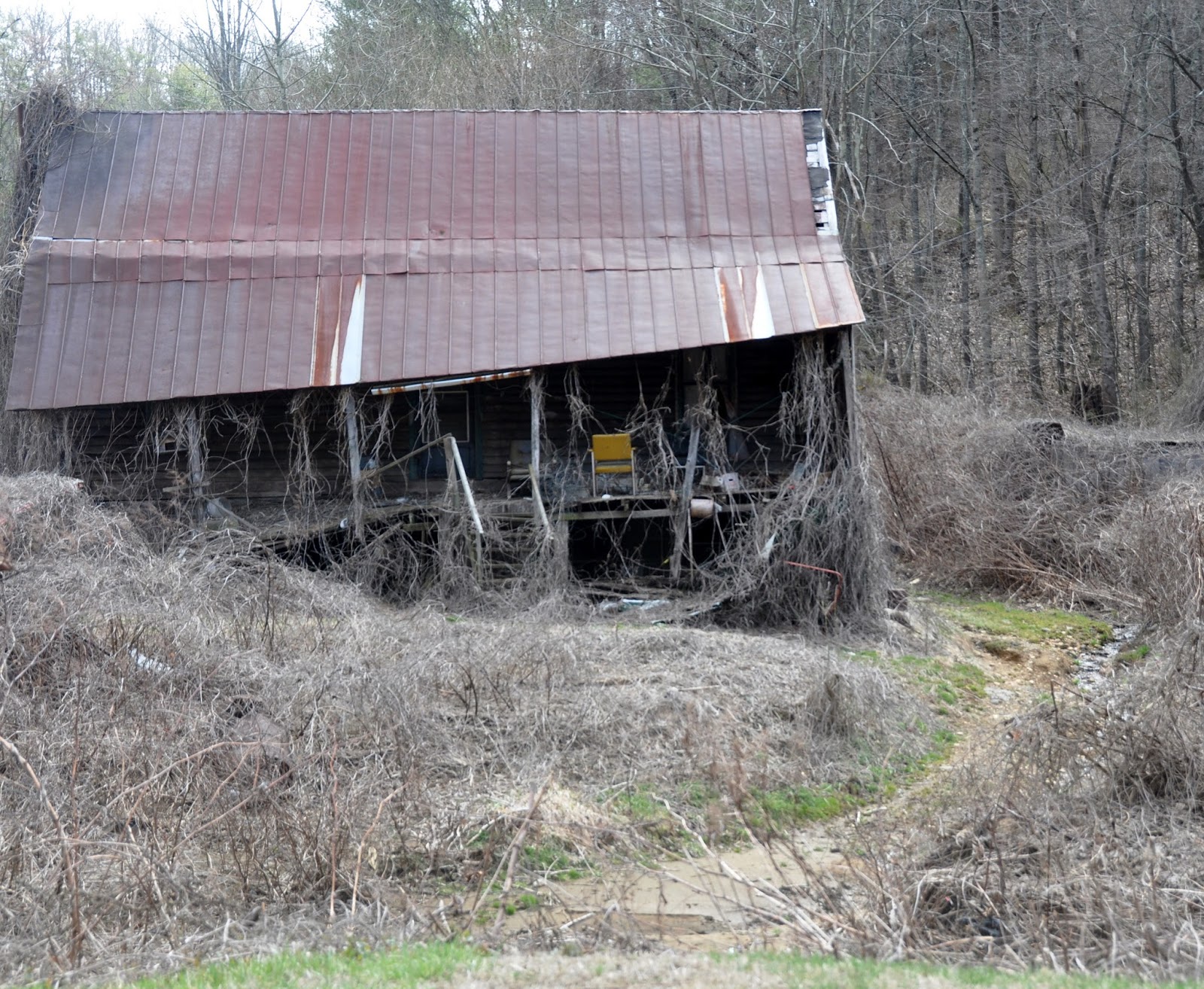 Email ThisBlogThis!Share to TwitterShare to FacebookShare to Pinterest
Labels: been here and gone, Miss Birdie

Walking with a pet brings such exciting stories...

I haven't heard the term grass widow in a coon's age!

Waiting anxiously for the "to be continued ..."

see i love places like that...so many cool textures and treasures...the old beer carton....think i would enjoy meeting these boys...

It is such a joy to me to click on your blog in the morning with my coffee and find one of your tales!

Lovely, tender reminder of how much I miss the old language--and the people in my life who spoke it!

ah Miss Birdie, thank you so much for visiting me this morning. I've been missing you, truth tell!

What a wonderful treat, thanks so much for posting and for giving us the continuation to look forward to.

Can't wait to hear more about the Cutshall boys. We always used the term "cut grass widow" but it means the same. The house is perfect.

Vicki, my Aunt Viola lived in a holler in Beech Creek. She would have loved you and your stories.

Please don't leave us hanging too long! You should write a collection of Appalachian based short stories. I'd buy it in a heartbeat!

I'm hooked! I do enjoy your writing and can't wait for the next installment.

That house is perfect!

"Grass Widow" is expression new to me, but you can bet I'll start using it. Is that Kudzu trying to claim the old house?

I wondered that myself -- kudzu or poison ivy or honeysuckle. I couldn't tell or Miss Birdie would have named it. Probably kudzu -- I'll have to go back in a few months to see.