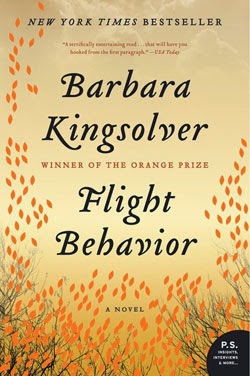 Here's another eclectic trio of books -- kinda like the jokes involving a priest, a rabbi, and a fundamentalist pastor. What these three books have in common is that they were all New York Times bestsellers and I enjoyed all three.

Barbara Kingsolver is a long time favorite of mine and Flight Behavior didn't disappoint. Kingsolver writes movingly about the southern Appalachians and their people facing the effects of climate change. Her prose is gorgeous and there are some terrific insights here-- along with some surprises. And there's a great review HERE if you want a really in depth look. Highly recommended.

When I first heard about John Green's The Fault in Our Stars, I wasn't tempted. A book about teenagers with terminal cancer? No, not for me. But when NCmountainwoman (I think it was she) recommended it as a good read, I gave it a try and was very pleasantly surprised. The book is delightful. The two main characters --  yes, teens with terminal cancer -- are witty, snarky, wise beyond their years, and, to me, at least, quite believable. One of the negative reviews I read complained that all the characters in the book sounded like John Green. Maybe so -- this is the first thing of his that I've read so I can't judge. But I'll be looking for more..

Hawaii was published in 1959 and I read it in September of 1960 -- in the back seat of the car as my mother and grandmother were driving me from Tampa, Florida to Atlanta, Georgia to begin my freshman year at Emory. I can remember being totally enthralled with the epic story and have probably reread it a few times since. But not recently. I was curious to see if it was still so captivating, fifty some years later.

Well, yes -- but for different reasons.  The opening part which deals with the natural forces that formed the islands, the grand sweeping geological eras as the islands emerged and life took hold, seemed a tad bombastic -- in the same way ham actors are said to 'chew the scenery.' I wondered if the whole book would seem corny to me this time around but was happy to find that either it settled down or my tolerance for purple prose grew as I read on.

As Michener worked his way through the coming of the native Hawaiians, the missionaries, the Chinese, and the Japanese, I found myself lost in the personal stories -- the man is a terrific storyteller -- and thoroughly enjoying enjoying it all over again.

But what really surprised me was the relevance of the political side of the book -- the pre-statehood (and later) Hawaii that was controlled by several wealthy families working behind the political scenes to protect their business interests. When I read the book all those years ago, I'm pretty sure I skimmed over that bit, preferring to concentrate on the various love stories, colorful characters, and beautiful scenery.

Today, alas, it all rings too depressingly true -- and not just for Hawaii. 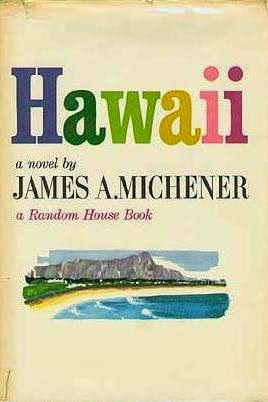 I'm impressed that you can read in a moving vehicle! My sister can do that, but it used to make me sick as a dog. I haven't tried it in decades.

Rereading books is one of my passions. Schopenhauer said something about the need to read a good book at least three times, and I remember one of Philip Roth's characters teaching literatures and lecturing about rereading a book every ten years, and it being a different book each time because the reader has changed. I find this being so true!

You reminded me of one of my favorite books, James A. Michener "Chesapeake". It kindled my love for the Eastern Shore, and I have read it a couple of times already. I may just go back and read it again.

hmm...i will check out the green book...i have seen it and heard about it but not picked it up....

been a long time since i read any michener

I'll have to look up the Barbara Kingsolver, it's been a while since I've read anything of hers. The Fault in our Stars may be Green's best, although I certainly enjoyed An Abundance of Katherines and Looking for Alaska. His video blog, along with his brother, is worth a look. The vlogbrothers on youtube.

As a craftsperson doing faraway shows, I would have been excrutiatingly bored if I couldn't read in the car. Vicki, like you, I really loved "The Fault in Our Stars" and "Flight Behavior." I'm not big on Michner, but really liked his "Chesapeake," the geological part. Now, every time we drive over the Susquehanna River, I follow it down in my mind's eye to the Chesapeake Bay.
Deana the Queena

PS Just read the very short novel, "The Uncommon Reader," about what happens when Queen Elizabeth
stumbles on a bookmobile in her back yard, behind the hedges. Written by Alan Bennet
Deana the Queena

Ummm, some great temptations here. I'll have to reread CHESAPEAKE -- it's been a long while. Also THE SOURCE which is probably my favorite Michener.

And the other Green books and the Queen Elizabeth one . . .

Thanks for your recommendations, which are seldom far from my own taste. Haven't heard of John Green, so now will check him out. I'm in "Folly" with Laurie R. King right now. For the 2nd time through. Good books are like sweet acquaintances, "so nice to see you again." Favorite books are on the shelf 'cause I know I want to sit down with them again and again.

Read and loved all three, although "Hawaii" was a really long time ago. I went to hear Barbara Kingsolver in Asheville on her book tour last year. I had her sign "Poisonwood Bible" which is my favorite. I was fascinated with "The Fault in Our Stars." Great humor and writing style.

Good golly Vicki, I wish I could make the time to read all these books. I'm making a reading list from your suggestions for future reference--I can just hand it to Chris at City Lights and he'll hook me up when I'm ready:)

Kingsolver's book is one I will need to read. I read the excellent review that you linked in your post. It was a done deal when I finished the read. thanks -- barbara

Did you mention Flight Behavior before? Somebody did, and I snatched it up. It's sitting on my shelf waiting for me.
Right now I'm reading Ivan Doig's The Eleventh Man, and as I don't understand either football or aircraft very well, it isn't grabbing me.

KarenB:
"The Uncommon Reader" is a lovely read!

More about An UNCOMMON READER very soon! (I adored it!)

Yes, my goodness, what an interesting trio. Alas, I'm not sure I'll ever read Barbara Kingsolver…I fell into listening to an audio interview she had done and was put off…and now can't bring myself to read any of her books. LOL Maybe I'll forget the interview after a while. ;-)

Like you, I read Hawaii decades ago and thoroughly enjoyed it. Just the once, though, so now I may have to pull a copy to the near-top of my pile.

I love Barbara Kingsolver and can't wait to read Flight Behavior.
I am an admitted John Green junkie, I've read everything he's written, watched most of his youtube videos, been one of his Nerdfighter gang forever, and have most of his books autographed. I love his witty, smart writing, and there truly are teens who are this smart and witty, and one of them was Esther, one of the online gang who died from thyroid cancer and was in a way, the inspiration for Hazel Grace. Looking for Alaska is his next best, in my opinion.
As for Michener, I still have Chesapeake on my to read pile, because I grew up there, and if it's good, maybe I will tackle Hawaii someday.
I have so many books piled up to read it's hard to know where to start, so thanks for the suggestions. Happy reading.

I've evidently been under a rock somewhere not to have heard of John Green sooner. I will have to look into his books and videos -- sounds like stuff I'd like.