Now It Can Be Told! 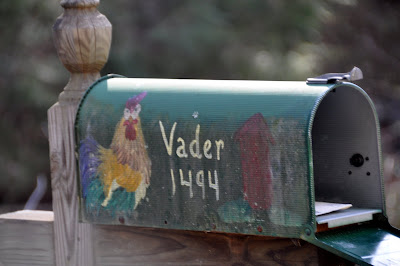 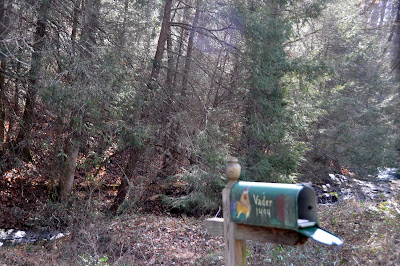 PS: Looks like the mailmen don't close the boxes there either.

hahahaha...i love it...my boys thought it was funny too...we are a bit of fans of his movies you know...

Ha, always though there was something of a chicken farmer about him!

Ha ha very funny. Yesterday afternoon I was watching a quiz programme on TV. The contestants had to identify famous people from their photographs. One of the pics was of the actor who plays Darth Vader. Nobody knew who it was. Everyone knows his voice but his face, no!

Laughter is definitely what I needed to get some nice deep breaths this morning. What a hoot! Now down the road you'll have to find the place that Darth Moll lives, eh? (I'm not sure how he spells his name)

I don't understand this private joke, but I love your picture collect photos of decorated mail boxes

your picture, I collect ...

Miss Yves -- Darth Vader is the scary villain of the STAR WARS films. I was amused to realize I had a neighbor with the same last name -- not a common name around here.

Thanks for the wonderful laugh this morning Vicki! Have a great weekend.

Thanks for your explanation!

Of course, I know "the scary villain of the STAR WARS films"but I wondered why it was the surname of a mere hen (without guessing it was the family name of your neighbour!

That is funny. But at the same time, it must be tough for a kid to have that last name. I knew a guy at work with this last name, he told me his son had a rough time at school – he was slight and fair and was bullied a lot.

Can readers send emails to your publisher? I really miss Elizabeth. I'm certain she has other stories to tell.

Take care and May the Force be with you!

Made my already wonderful day!