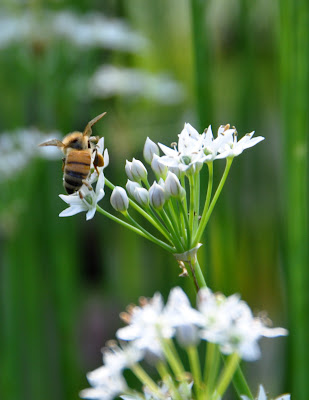 Years ago I bought a clump of garlic chives. They were cheap and to my delight they flourished and multiplied. Soon I had the inspired idea to make decorative Vs of them in four of my herb garden beds. 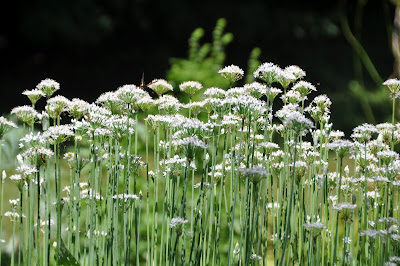 The leaves are delicious in salads or vinegars and the flowers are lovely and also edible. 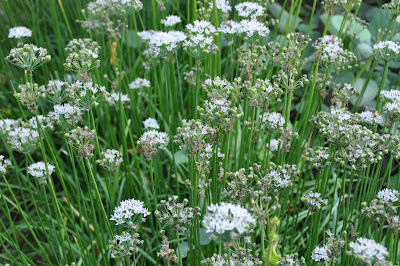 But, alas, all too soon the flowers go to seed and I have learned through bitter experience that, left to their own devices, the garlic chives would choke out every other herb.  So as soon as the flowers begin to be replaced by knobby green seed heads, I ruthlessly cut down those pretty flowers and compost them.

It took a while but I have finally learned that a garden catalog's "hardy" or "spreads rapidly" is code for "INVASIVE - BEWARE!" 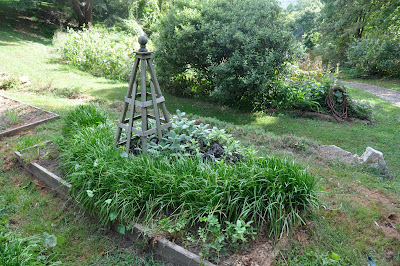 If you give them their own box, will they still be out of control?

Well, certainly somebody bee-lined in and enjoyed the too enthusiastic garlic chives.

Our "regular" chives are confined to a whiskey barrel on the side porch. And still, I cut off the flowers as soon as I see them starting!

oh yeah I have learned that language too

I used to have one raised bed just for my chives. Through lack of care, they finally died out. Until this year I've been fighting lemon balm. I think the drought might have done it in for me, though. (Do you feel like a murderer?)

I used to have trouble destroying volunteer seedlings of all sorts. No more -- I'm pretty ruthless now.

It's hard when things have pretty flowers, but I'm battling borage now. The bees love the blue flowers but it spreads so fast and gets huge and unwieldy.

About ten years ago, I had a beautiful herb garden with over 40 different types of herbs. It was gorgeous! I had regular chives and garlic chives and those purple and white blooms were SO pretty! Little did I realize that all of those chives would take over and crowd out almost everything else. It took me YEARS to finally kill out all of those chives! It was like trying to dig up sod.