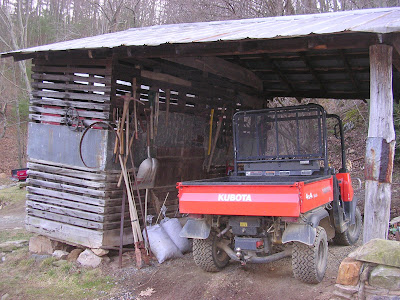 The corncrib was a relic of the days when the previous owner of the farm had grown field corn to feed his cattle, his mules, his chickens, and his family. The corn was harvested after drying on the stalk in the field, and the unshucked ears were stored in the small slat-sided building that was lined with rodent-proof woven wire to protect the precious golden bounty. Nowadays, the corn crib stood empty, but for a few ancient moldy cornshucks. (Art's Blood, p. 123)This, of course, is the original of the corn crib where Elizabeth and Ben found the unhappy Kyra. It's functioning today as a tool shed and a carport for our little utility vehicle but in 1973, when we bought the upper part of the farm from Clifford and Louise, the corn crib brimmed with fat dry ears of white corn -- Hickory King, I think it was.Corn was the staff of life on the small farm. Every so often Clifford would take a bag or two of the whole corn to a mill in Tennessee where it would be coarsely ground -- shucks, cobs, and all -- and mixed with cottonseed meal and molasses to make feed for the cows. Every day Louise would pull the shucks off a few ears and toss them to her chickens who would eagerly peck the cobs clean. Nell the mule was the daily recipient of more ears (but not too many, lest too much corn make her 'rank' (overly frisky and unmanageable.) The fattening pig, who lived mostly on buttermilk, foods scraps, and garden waste, would be fed ears of corn during the month or so prior to butchering to "harden up the flesh."And this same corn, shucked and shelled would be taken, not to the big mill, but to a nearby little mill run by a belt attached to the rear wheel drum of a tractor. The owner of this improvised mill would take his pay in meal -- in a little measure specifically for the purpose. This fragrant meal, which was freshly ground in small batches twice a month, provided the best cornbread in the world. Eaten midday -- hot and steaming out of the wood stove, dripping with home-churned butter, it accompanied an array of vegetables, fresh or home-canned, depending on the season, and a very modest taste of some sort of meat. The leftover corn bread might go to the pigs or the hounds, or, dunked in chilled buttermilk left after the day's churning, provide a light supper."You keep the mule to plow the corn and you grow the corn to feed the mule," Clifford told us. Man, animals, and corn -- their existence was interwoven. 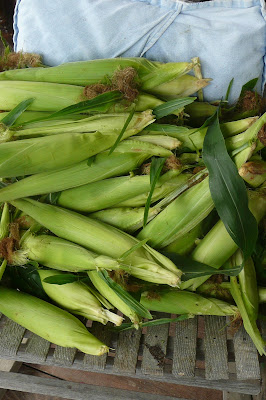 This is so interesting Vicki..and linking it to your wonderful book Arts Blood. WE grow maize for the cows and we eat sweetcorn, but we do not much use cornflour. Corn bread sounds delicious.

They say, what goes around, comes around. I often wonder, looking at the world as it is, whether we'll see a return to this kind of existence one day, out of necessity. Very enjoyable post.

you know i kinda hope for what martin hints at...i think we lost much in our disconnection for the food we eat...

I'm with Martin. With things as they are in the world today, will the mountains one day return to the old days.
Sam

I'm with Martin too. Most of us are so far removed from the food we eat. Sad state of affairs really, the price of "convenient, modern living." It has been encouraging recently to see the local food movement take off. Hopefully that will continue to grow.

How beautifully you take us back. Makes me wonder how much we've lost in our convenience economy.
Kath

Beautiful. Love this "Corn was the staff of life" . . . And I love southern cornbread; I grew up on it and, you know, it just doesn't taste the same up here in the north even using Grandma's cast-iron skillet. Thanks for reposting this, Vicki.

That's a cool little vehicle! WT would love to have one of those little babies to ride around the manor grounds.

We're working at getting back to growing/raising much of our own food. Cows, chickens, perhaps this year a pig. Perhaps even field corn which we haven't grown in a long time.

The Kubota is the bomb, Tess! The back even has a dump bed. And they come in four-seater versions, should WT wish to give tours.

Wonderful post. We started our own little garden last year. We were not at all successful but we learned a lot and will try again this year to get it right. We have walnut trees and nothing likes to grow near them. We did collect our walnuts and had them hulled earned $2.20 but the experience was worth effort.

I remember that part in Art's Blood it was kind of scary. I had that image in my head of a corncrib from your description! I never knew what a corncrib was before your book.

Black Walnut trees are really hard on tomatoes, eggplants, potatoes .. and probably quite a few other vegetables. We have a lot too -- just try to keep the garden well away from them.

It seems like a simpler time but it was probably a hard time as the worry was to be sure you had enough corn to store. I love the old crib.

Vicki -- Charming rural corn crib. It certainly has stories to tell and you as a writer have captured one. The informative story that goes with the corn crib adds dimension to this outbuilding. It was full of vintage farm ways. -- barbara

Love your Corn Crib post! We have one, as well. Whileit goes variously by the name Corn Crib, or the Cottage...mostly, though, The Corn Crib, other locals called the early 1900's structure a "granary" a small building constructed, as you described, for storage of mainly corn, but other bins in ours held grains of one kind or another,as well. We lived in the "granary" (Quite a bit larger than yours, Vicki)before we moved into our (much larger) home MM built. But oh, the fun times we had in The Corn Crib! Now, it's been transformed again, and is my Dye House!