Q:I ended my last FAQ post by saying "If you really want to write, you'll find the time."
To which one person responded: "It is not the writing that I have difficulty finding the time for, it is the "Writing". People keep telling me I should "Write" rather than write but I can never find time. And I suspect the reason is the one given in your final sentence. Deep down, I suspect I am frightened of attempting to Write in a serious way (whatever that may be.) 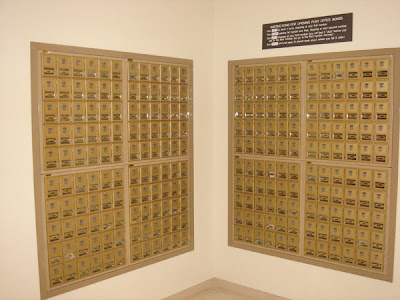 A: That wasn't actually a question but that's okay -- this isn't actually an answer.  But if the writer is talking about a fear of rejection, I can speak from my personal experience.

When I was in high school and in college, I thought I'd like to be a Writer.  I knew I wrote well -- I was an English major, after all. I wrote essays and papers and the like all the time. And got A's on them. But could I Write?

To me, Writing meant publication -- preferably in The New Yorker and, failing that, in some prestigious literary journal.

And I couldn't bear the thought, not so much of rejection as of anyone knowing about said rejection. I even toyed with the idea of renting a box at the post office so I could receive issues of The Writers Digest surreptitiously -- as well, perhaps,as the dreaded rejection letters.


I didn't do this -- neither did I pursue Writing any farther after sending one poem to The New Yorker and, not surprisingly, receiving one rejection letter.


It took over forty years before I decided to Write -- ie pursue publication. And somehow, a wonderful thing had happened.  I had lowered my expectations. (I suspect it had to do with age and wisdom.)


I gave myself permission to fail. And permission to fail publicly. (More age and wisdom -- I find that the older I get, the less I care about what others think of me.) I told people I was trying to write a mystery. When I finished it (and what an achievement that felt like!) I let it be known I was querying agents.

My family saw the rejection letters clogging the mail box.  (The post office is over thirty minutes away -- thank goodness I'd gotten over the secrecy bit.) 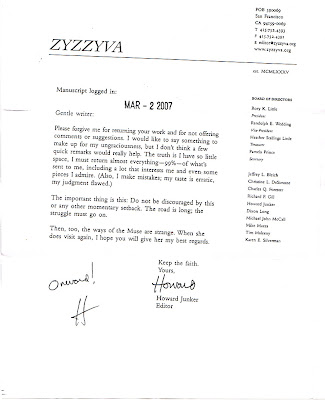 The above is not one of mine -- I wish that it had been. Encouraging rejections are few.  And in spite of my lowered expectations, each form rejection was like a body blow. A scribbled note on a rejction letter, on the other hand, felt like a hug.
I've told people that I think one needs to feel fairly strong and secure in themselves to risk repeated blows to the self esteem. But if you want to Write, that's what you have to do. You can't succeed without risking failure.
People deal with rejection in many ways from papering a room with rejection letters to changing their names and moving out of town.
Here's a novel approach.  Check out the Journal of Universal Rejection .
It might be therapeutic.  Or at least good for a giggle.

giving yourself permission to fail is huge...and a hurdle for many...one of the reasons i try to push myself to try new forms of writing...not only to find what i like but to fail gloriously...smiles.

Wonderful wisdom, Vicki. Thanks so much! And the Journal of Universal Rejection is fab!

I suppose we also write for ourselves because we feel we have to do it. If a story pops into my head, I write it down before I forget it. Then, later on, I might go back and embellish it.
Good advice as always, Vicki and the Journal of Universal Rejection brought a smile to my face.

Read once - noted. Read twice - acted upon. Whatever happens, I will blame you.

This was a fun post for me to read. Giving yourself permission to fail. I'd never actually thought about that. It has seemed like a given. Permission to succeed? That gives me chills. It seems like so much work.

I like what Brian said, "to fail gloriously" That inner knowledge that your heart shared a paddle with your soul and together went beyond everyday acceptance. It would be glorious to know that the effort was not for the band of "those who are somebody" but for love of crafting a homespun creation that the world will neither understand nor find luxury in.

Giving yourself permission to fail is a tough pill to swallow. With age and wisdom come good things. At least there are some good things about aging (smile, 'cause I'm right there with you).

I'm off now to read the Journal of Universal Rejection.
Sam

This is a timely post for me, as my biggest New Year's resolution was not only to Write, but to actually take the bold step of sending it out. (Which, for me, is a bold step because I'm not at all strong or secure in myself.)

Interestingly, the latest essay I've written (and am about to send out) is one about a rejection from one of my writing idols and how it affected me. My essay, fortunately, is not as grim as it sounds. My in-house (and not completely unbiased) readers say it's hilarious. Hope the Oxford American thinks so, too!

"Permission to fail" Yup. Another excellent FAQ post, Vicki. But really, failure is good, isn't it, because it means we had the strength or confidence or foolishness or whatever to 'try' something!

One of my favorite quotes is:

"The stars are not afraid to appear like fireflies." by Tagore

Heck, if the stars don't care how they might appear to us, then why should I? :-)

I succeeded in lowering my expectations to the point where my latest rejection cheered me up. He sent me a PERSONAL letter - not a form. And while he was praising me to high heaven, the fact he was rejecting me didn't matter.

If my manuscript goes no further, I lost the maniacal insistence that it should/would be published.

It's WONDERFUL to lose that frantic feeling.

Failure is stigmatised, both in education and the workplace. In order to achieve anything worthwhile, we should prepared to fail. If at first you don't succeed...

I need to add a note, here...should have done so with my original comment this a.m.
Jeffrey Brown on PBS's Newshour, last night, interviewed a teacher of Writing, author, playright, Roger Rosenblatt on his new book on writing, Unless it Moves the Heart: The Craft and Art of Writing. I found it to be insightful and encouraging.

Simply Google Roger Rosenblatt PBS Interview where you can watch and listen to the 7-minute interview.

Failing gloriously is the right attitude! Thanks, Brian!

Blogs are a wonderful way to dip a toe into writing for the public. And sometimes they can lead to a book or getting an agent interested. (All the more reason to proofread...) Or they can remain simply a personal expression, shared with friends and strangers. And that's nice too!

Alan, good for you! I shall follow what happens with special interest.

Rainsong and Wil -- Of course there's a joy in writing just for itself. But there's a challenge to getting published that calls to some of us.
And some people actually make money at it.

Yep, Sam, there are some good things -- quite a few, actually.

Congratulations on taking the next step, Beth! And best of luck!

Dana, that's what my agent calls 'positive rejections.' And they show that you're on the right track.

I'm old enough to expect rejection and not let it get to me. I am not swayed easily, but I do listen to advice and what people have to say. I also give my truthful opinion, if asked. I haven't always been that way.

BTW, I'm on your third book and enjoying plucky Elizabeth.

So you, I am not even courageous enough to approach anyone 'officially'. (I don't count being published in local papers)

I'm glad you did decide to Write. I have loved 'The Day of Small Things'. Your storytelling is great - some days I had to have an extended lunch at work as I just couldn't put the book down! The way you can capture an image in just a few words is outstanding too. I remember one sentence describing the way sunlight fell through leaves 'like cornmeal falling' (your words were better than that!) and there were many such examples that I devoured like they were some kind of soul-food. As for Birdie, well, if I say I keep on thinking about her from time to time even now I've finished the book - you will see she became a real person to me. I keep wondering about her, all that time she lived with Luther and birthed children that died. Wondering how she coped with that. I can see I shall be ordering more of your books!

Oh I'm so glad I decided to backtrack a few days to check the posts I missed while I was out of town. This is an important one. I should print it and tape it to the wall next to my desk. Now, off to check out the Journal of Universal Rejection...