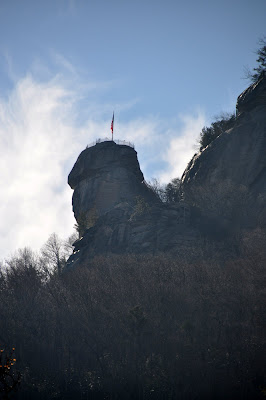 Well, I really thought I was done with Chimney Rock and then I got an email that was too good not to share. Which, with permission and with a few names removed, I will. 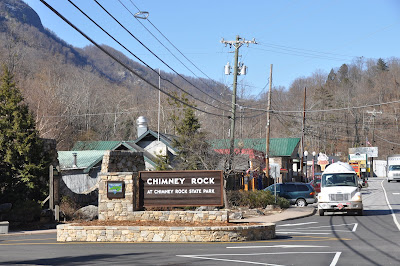 But first, a little about the village of Chimney Rock.

It was pretty empty the day I was there but it's obviously a magnet for summer crowds. It reminds me of the western North Carolina I saw one summer back in Fifties.There are telescopes for looking at the 'chimney' and the main street is lined with establishments selling barbecue, ice cream, fudge, walking sticks, and all manner of mountain souvenirs. And postcards.

And that brings me to the email I just had to share. 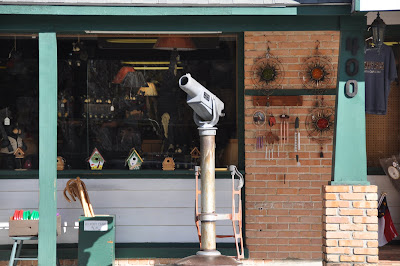 My correspondent, who shall remain nameless, wrote:
"Back in the late 60's , early 70's  a friend and I visited the tourist attraction. Became intrigued with the symbolism of the "Chimney Rock" got the giggles, bought post cards and sent them to a few womanizers we knew, doctors that we knew dallied around, and members of our hometown's society that considered themselves, in the parlance of today, "babe magnets."
We dashed off the line "thinking of you," stamped them and sent them on their way. Always wondered what the wife or secretary thought.
We were bad. So bad.
:)" 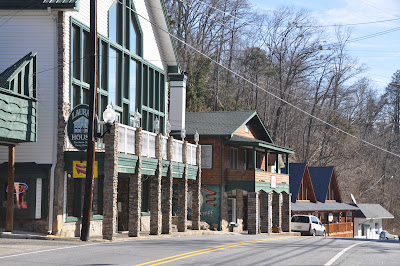 "in the parlance of today, "babe magnets."
Please, what does that mean?

That is such a great payback. Very funny.

I got a good laugh about that ... heck, I've gotten many good laughs over this subject! LOL

Oh, and on the serious side, Chimney Rock, the town, is really the cutest town. Haven't been there in years, but remember it fondly.

Dear Vicki: You "were" bad...but in a good way! Those who needed a wake-up call and a little more rebel-rousing certainly got their come-upance! Good for you! (snicker-snicker!)I just have to go to Chimney Rock now! And relive those Vicki Lane moments! A street named Vicki Lane!Vicki did it, Vicki and friends did it! hahah!ps was there any clue that it was or wasnt you? I can see this as a play of sorts! A period piece set in the 50-60's with all that most amazing NC repartez and parlez!

Miss Yves - In today's slang, a 'babe magnet' is a sexy man (or car or place) that is attractive to good-looking women (babes.)

No, Chiccoreal -- I was not involved in this prank. It was two friends of mine.

Brian, I'd like to think it was a wake up call and they changed their womanizing ways. But I doubt it.

What a great sense of humor!

I know a few "babe magnets" I could sent those post cards to. But, I never would have been clever enough to have though of that.

Oh my goodness, they WERE bad!! Now I want to know what other pranks they pulled and stories they have to tell, these mischievous friends of yours!! Hilarious post! Oh, to be a fly on the wall when those postcards arrived....

Perfect little prickle of a joke! I've thought about doing the same thing with Pilot Mtn! What a twist that would be to picture them both! hahahahaaaaaaahahaaaaaa

This is way too funny. I must take a short drive and see this for myself. And photograph it - I will never think of it as "Chimney" Rock, that's for sure. I wonder if those doctors were ever questioned... LOL

I'm glad you all liked this story as much as I did!

I'm glad you all liked this story as much as I did!