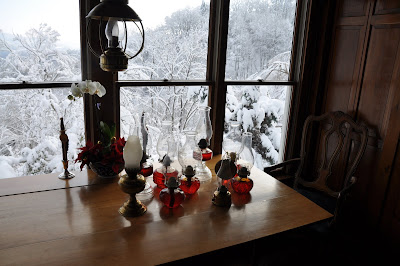 Well, kind of roughing it. We're fairly well prepared to deal with power outages such as we've just had -- from a good supply of kerosene lamps to a gas range top and gas grill as well as three wood stoves -- one for cooking. Our supply of wood, however, was not unlimited and we weren't able to keep the house as warm as I, for one, would have liked.

Water was another problem. We used to have gravity feed water from a small but constant spring. When we put in a well, the water of which was just as good-tasting as that of the spring, we let the gravity feed system go.

Therefore, during this late unpleasantness, John was hauling buckets of water from the branch for washing and flushing. (The old outhouse was another thing we let go.) Justin supplied us with drinking water from his spring.

Note to The Department of Redundancy Department -- time to make a new outhouse and reconnect the gravity water system.

Yet another worry was the two large freezers full of beef and veggies from the garden. It was cold enough in the basement that they kept things frozen during the outage but by the fifth day, we were beginning to see signs of defrosting.

So John went out and bought a generator -- he and Justin muscled it to the house and soon the freezers were running, I had charged my camera's battery, and the refrigerator (which really had been losing its cool) was chilling again.

When that was done, John and Justin hoisted the generator back into the Kubota to take it down to Justin's house to run his freezer and refrigerator for a while.

And there, down at Justin's house, was the glorious sight of a repair crew, putting the finishing touches on the line.

"Be back on in five minutes," said the weary, improbable angel, a cigarette flipping in the corner of his mouth.

And there was much rejoicing.

Times like this are good for us -- to put us in mind of how fragile our existence is, how much everything and everyone depends on a whole chain of other things. 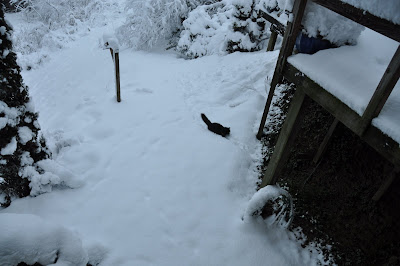 The one really anxious time was the morning I saw Eddie plowing through the snow (on his way back from the bird feeder) and assumed that he would show up at the door. Some hours later, I realized that I still hadn't seen him come in and I became convinced that he'd been buried in one of the snow slides off the roof.

What joy when he came sauntering downstairs, having gotten in somehow without anyone noticing him! (He has his ways . . .)

Here's a slide show of our pre-Christmas excitement. You can click on it to make it full screen and slow it down or speed it up . . .

Oh Vicki, what a time you had. We do indeed take so much for granted, and everything depends on the power supply. So glad you came through it so well. The little cardinals (we do not have them in Ireland) are so red against the white snow. Big hugs, Margie.

Your pictures are beautiful Vicki, and your comments on 'roughing it' made me appreciate even more that we didn't loose power, although those at the southern end of our country, which butts against NC, were in the same shape as you.

We didn't have as much snow as you did, only 10", but it sure was pretty. Some snapping of trees in the beginning but not actually til it started to melt and then it brought a bunch of branches down.

I wished for a white Christmas, but don't think I'm going to do that anymore!

Don't you think that occasional 'fine line' experiences refresh our appreciation of creature comforts, as we know them?

I remember a year when were snowed in and frozen out. Candles around the house and cooking on the open fire. It was an adventure for a couple of days, but we were jumping for joy when the power was restored.

Very cosy view indoor!
Is you chair a Chippendale one ?
Happy to learn that Eddie hadn't be buried under the snow !

Great pictures Vicki! I love the one of William "hiding". We have 2 generators and 6 kerosene lamps,gas grill and camping stove for use during Hurricane season.I went 21 days without power in Tennessee after the 94' ice storm!
It's no fun but it keeps you in tune with what's real in this world.

It certainly makes one appreciate those hardy women who kept house in previous times. I suspect that standards of cleanliness was a great deal more relaxed/

Would you believe that our hot water heater went out yesterday -- the wiring is fried. The good thing is that we were here to smell the smoke and deal with it -- though it meant missing a friends Boxing Day party. So I'm back to heating water on the stove -- but at least the cold water is still running!

How dependent we are on electricity and water. We are spoiled and are surprised that we sometimes have to do with less than we are used to.

Hi Vicki, glad to see you are getting back to normal and very glad you were there to deal with the hot water heater. As bad as the devastation is, in a few years the trees will regain most of their shape back. (well most of them anyway...) The trees that didn't go down around here in the ice storm in 07 are just now looking 'normal' in their outline. The worst part is cleaning up all the debris, but it makes good firewood and kindling! Ha.... I agree it is shocking how dependent we are on the 'system'...and how difficult it can be to cope when something like this shuts it down. I was like you and pretty prepared with the basics, but it got old. Since I heat with wood that didn't change (except like you all, had to get to the woodpile first, chainsawing tree limbs out of the way!). I just was so glad I was prepared so that I could stay home and not end up in a shelter like many...that would be horrible. (and likely wouldn't happen ...I'd stick it out here). I know not everyone CAN be totally prepared, and there were things I never thought of til after, but I do believe more of us need to take responsibility for ourselves and families to be prepared as much as possible for something like this. When the ice storm happened around here the nearest town was completely shut down--only one grocery store was escorting people through via flashlight! No gas stations etc. It was very hard for people not ready/prepared. Anyway...the pictures were gorgeous and I'm really glad Eddie was buried in a snowbank. (The things they put us through!)
Tammy

You, better than most of us, probably know about living with hardship, Reader Wil, after your experience in the internment camp in WWII. Our few days of inconvenience were nothing in comparison.

You have to be prepared, don't you, Tammy, when a bunch of critters are depending on you? My first thought, when I know a storm's coming, is to be sure we have plenty of feed for all the dogs, cats, cows, chickens, and wild birds.

Gorgeous photographs. The one obstacle we didn't have to deal with was loss of power. And that's the one we can most easily deal with...when we built, we installed a big generator that will run the entire house more than a week.

We also got dumped with a foot of snow...the icy heavy stuff, not the beautiful fluffy snow. It's still around although it's melting fast today...finally.

The photos are so pretty. Maybe I should be glad we only got rain : ) I hate carrying water for the flushing!

Oh my god, Vicki, that is a lot of snow!!!! So good to hear you have had a lot of help rearranging your things in this emergency time.
Hope things get back to normality soon.
Lovely pictures in your slide show, and so nice red birds you captured with your camera.
Wishing you much happiness for 2010.
Muchos cariños,
Maria Cecilia

Hey, Tipper -- I agree about the flushing -- which is why I'm seriously agitating for an outhouse. Just for emergencies (or nostalgia.)

Maria Cecelia, we are snug and warm and fully powered at the moment. Muchas gracias for your good wishes!

Vicki, so glad Eddie made it ok! The slide show is **beautiful**. That would be a dream come true in Louisiana, but not sure about the no power thing...your pictures are just gorgeous!

Beautiful, indeed, Christie! And now that we have power back, I can say that it was worth it!