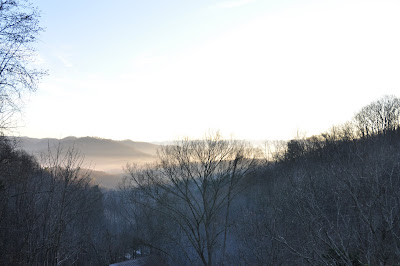 When I was very young, the days before Christmas were a magical time, filled with eager anticipation. I eyed the presents under the tree, fingered the empty stocking hanging by the fireplace (hoping for something overlooked from last year; even a hard stale chocolate kiss would have been welcome . . . ) and generally drove everyone crazy asking how many more days till Santa would come. 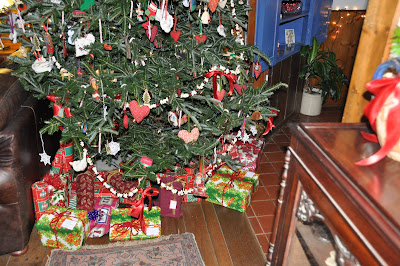 The presents beneath the tree were intriguing but off-limits -- no investigation allowed. Plus, these packages tended to have boring stuff like clothes.

It was the things that Santa would bring and leave in our stockings or on the hearth in all their unwrapped glory that I had on my mind . . . and it was hard for a six year-old to wait.

So, on this particular day, less than a week before Christmas, I was at my grandparents' house. As I remember it, only my grandmother and I were there.

I had occupied some time skipping from room to room of the house, singing (off key, no doubt) "Christmas is coming, Christmas is coming," as I made a circle from kitchen to breakfast room to library to front hall to living room to dining room and back to the kitchen.

Ba was making a pound cake and after my fifth or sixth circuit, she asked if I wouldn't like to come help her. Knowing there would be a bowl to lick, I stopped skipping and let her tie an apron around me. 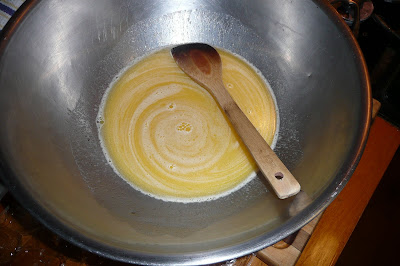 As I stood on the step stool wielding an awkwardly long wooden spoon and trying to stir the huge bowl of batter, I said to Ba, "I wish I had some little cooking things just my size."

Just then there was a loud sound from the other end of the house -- maybe a door slamming.

"Run see what that was," Ba said, taking over the stirring. "It sounded like something in the living room."

Off I went on the familiar route -- breakfast room, library, hall, and into the dim living room where the beautiful Christmas tree shimmered with glass balls and carefully placed foil icicles.

But there, on the hearth beneath my still-empty stocking, was a little set of child-sized baking pans!

I grabbed them up and ran shrieking back to the kitchen to show my grandmother the miracle.

"Santa must have heard you wishing and decided to come early," was all she said.

And she helped me to butter one little pan and line it with waxed paper so that I could fill it with batter for my own child-sized pound cake.

As we slid it into the oven, I was sure that I could hear the distant sound of bells jingling and a faint "Ho, ho, ho!" 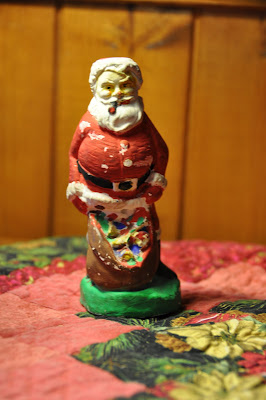 A wonderful and touching story, told in just the kind of spirit everyone should experience at this time of year. Christmas really is just around the corner, isn't it?

so sweet that story! i had a tiny baking set too, nowadays i prefer to eat cakes and cookies than to bake them! you like the book rebecca: it is a hard read for my, somehow the language is so old fashioned. but it is a must-read as de mauriers book hungry hill is even more difficult. but the mountain hungry hill is nearby (half an hours drive from us) and it is set in a castle which used to be a romantic and slightly spooky ruin until it was converted into a six-or-seven-star-hotel a few years ago - until the celtic tiger left and along it took the millions of the investors and now it is becoming a (modern half-finished) ruin again.

What wonderful magical tale about Christmas and the love of grandparents!

Imagination is a wondrous thing, isn't it?
I still can "see" that beautiful red horse flying over my parents house, the same horse my father had told a tale about the night before. No one would believe me, but I knew it was true.

What a wonderful memory to carry with you always!

Thank you for sharing your magical Christmas story. I believe!
Ho Ho Ho

That's a very nice Christmassy story Vicki and worthy of these exciting days before the big one.
Blessings, Star

Love the story! Do you have your pound cake recipe posted somewhere? I think I remember you did...or is it a family secret?

What a wonderful story! The magic of Christmas and love of Grandparents all wrapped up together. I think the fun of Christmas is how people will go to such lengths to do special little surprises for those they care about. I had one of the little ovens w/ it's special little pans. I had allot of fun with that little thing!
Thanks for sharing.
Tammy

Thanks, Martin -- it's one of my favorite memories.

Eliane - I can see that REBECCA might be a bit of a struggle if English is a second language. I don't know HUNGRY HILL -- will have to look for it.

And how lovely your memory of the flying red horse, Merisi!

Pat, I wouldn't trade those childhood magic memories for all the rationality in the world!

You gotta believe at this time of year, Anonymous!

Christie -- there is a hot link on the words POUND CAKE that will take you to the post with the recipe.

Ed E. Cat is enjoying himself mightily on this snowy day. He is sitting on the dining room table, watching the birds at the bird feeder in the snow. He is quivering all over and his tail is twitching and every once in a while he makes a lunge for the glass when a bird flutters by.

Some Christmas memories live in our hearts forever and they usually involve our Grandmother. That's a keeper for sure! :)
How much Snow are you all expecting?

Thank you, Star! In spite of all the hurry and carrying on before Christmas, it remains a magical time.

Tammy, I think that it was that same Christmas that Santa brought me (on Christmas itself)a little oven that really worked -- not one with a light bulb but one that heated up to a point that I'm sure would be illegal for a toy today. I became a great baker of bread puddings and never once set myself on fire.

Carol, we have almost an inch now but there's a possibility that it'll turn to rain later.

Dear Vicki, I wish you and your family a very happy christmas and may next year brings much joy, good health, and tons of love and blessings to you all.
"Christmas is coming, christmas is coming! go check your tree, maybe grandma has sent you children size cookies this year again!!
Muchos cariños
Maria Cecilia

Thank you, Maria Cecelia! What I'd really like to find under my tree is my sweet grandmother herself ....

That snow picture is gorgeous! Thanks for posting it! I have snow on the ground here but it's so much more fun to see it there on the mountains!

Oh Vicki-a wonderful story-I felt like I was there in the kitchen with you. I'm glad you have the memory-and that you shared it here too.

What a lovely remembrance. My mother was also an only child and her parents, my grandparents, would bring the toys that Santa left at their house for me. My grandmother also had a sister who lived alone in an apartment in Paris and had no children, my great-aunt Clementine, and, surprise… Santa would also stop at her house and leave presents for me. What sweet memories… The one I remember was right after the war, I was maybe 5 years old, and there was not much food – people had to use food coupons. I loved cheese but we never could get any. Well, Santa that year left food coupons for cheese for me at both my grandparents and my great aunt – how thoughtful of Santa don’t you think?

It's so gorgeous, in spite of the inconvenience,Liz, that we love it.

Tea sets -- I still have kind of a thing for those pretty little tea sets, W of S!

It's one of my very favorite memories, Tipper!

You were very special, Vagabonde, to have so many visits from Santa. And I can well imagine how delightful it must have been to get the cheese coupons from Santa. Most thoughtful of him indeed!

Santa is, to me, a wonderful part of childhood and some of the magic still lingers!