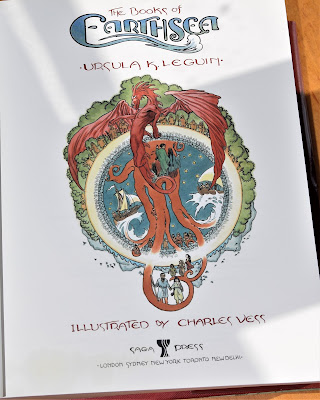 It had been almost forty years since I'd read any Le Guin but I still remembered the enchantment I felt, sailing that amazing archipelago. Then, when I began to see posts from Charles Vess--one of my favorite illustrators--about the giant edition of all Le Guin's Earthsea books that he was in the process of illustrating, The Books of Earthsea went on my wish list and, in due course, I received a copy for Christmas. 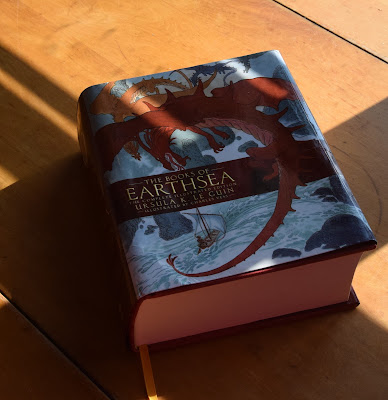 It's really big, dauntingly big. Too heavy really to read any way except sitting at a table.  That seemed weird, accustomed as I am to carrying whatever I'm currently reading all around the house--kitchen counter, sofa, bed, porch.

But I read it at the table -- most mornings after breakfast I'd read a few pages--five or six or till I got to a good stopping place.

And I found that I really enjoyed this little ritual. Le Guin's writing is so rich that my morning reading gave me much to reflect on during the day. And I savored every sentence, rather than dashing through as I usually do.

The last time it took me this long to read a book was back in high school when I took a notion to read The Divine Comedy.
Then too, I read in small doses and surprised myself at how much I enjoyed the process. (The Books of Earthsea is much more accessible--just physically unwieldy.) 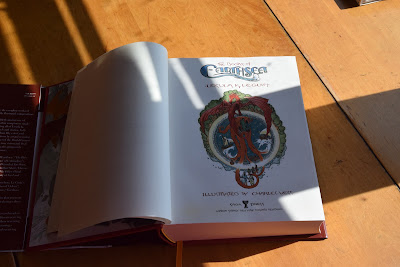 All six of the Earthsea novels are here, along with a handful of Earthsea short stories, and an insightful lecture, originally presented at Oxford.  It's 992 pages and every one is thoughtful reading. 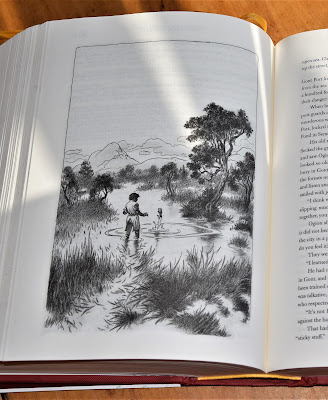 I love these tales of Earthsea and look forward to revisiting them. One thing that I found especially interesting was that the first three were written between 1968 and 1972  and, as LeGuin points out, have the default male hero. (He was, however, brown-skinned -- a departure for those times.) But when she started the projected fourth Earthsea book, in which the central character was a woman, Le Guin found herself blocked.

Le Guin says: "I knew what men did in books, and how one wrote about them. But when it came to what women did, or how to write about it, all I had was my own experience . . . It was high time I learned to write from my own body, my own gender, in my own voice."

It took about eighteen years. Years during which the feminist movement burgeoned and raised consciousnesses everywhere.  Including, evidently, LeGuin's.

Le Guin was in her early forties when the third book came out--and in her sixties when she picked up the thread for the last three books. The final books of the cycle deepen the stories of the characters, reflecting this new awareness of feminism, as women take their place in Earthsea lore, no longer relegated to supporting roles.

I found it fascinating to trace the development of the author and her mythos. Her commentary--in the introduction, the afterwords, and the final lecture, provide a wonderful insight into the workings of an extraordinary talent.

Now I'm going to have to find another book for this morning ritual. . . 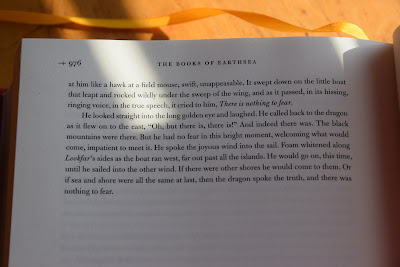 I have yet to read these...don't have any excuse. Am stuck with Terry Pratchett I guess. Time to explore some new worlds.

I've read SARUM and LONDON and I expect I'd enjoy THE FOREST. But perhaps first I'll go back and work my way through SARUM again, using the morning time. Thanks for the suggestion!

My daughter requested that edition for Christmas last year. Since I bought it early I was able to spend some time reading parts of it and enjoying the marvelous illustrations. Peter Matthiessen's SHADOW COUNTRY lacks illustrations, but at almost 900 pages certainly qualifies as a tome and is also a great read. And there is always DON QUIXOTE. It isn't a long book, but a great morning read would be ONE HUNDRED YEARS OF SOLITUDE. I think I recall that you once mentioned you had not read it.

And THAT's a good suggestion. I continue to be embarrassed that I haven't read it.

And I've ordered the first Earthsea book since I am a bit embarrassed that I haven't read any of them. And I need a bit of a light-hearted read after THE WEIGHT OF INK. Thanks for the idea. I always have my morning coffee on the deck or porch to get away from my husband's obsession with the morning "news." I think I can read this and listen to the birdsong at the same time.

And I have ordered 100 Years of Solitude. And I've begun THE HOUSE OF THE SPIRITS -- another one I should have read long ago.