The Guys -- Working Together 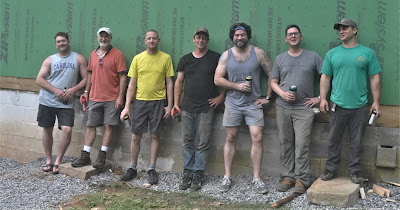 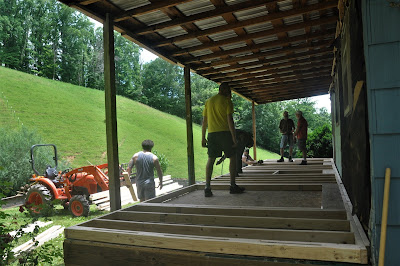 Ably directed by our friend and neighbor Mark Anderson, over the weekend, they raised the roof on Justin and Claui's back porch and enclosed it. Eventually this new space will contain a dining area, as well as enlarging two existing bedrooms. 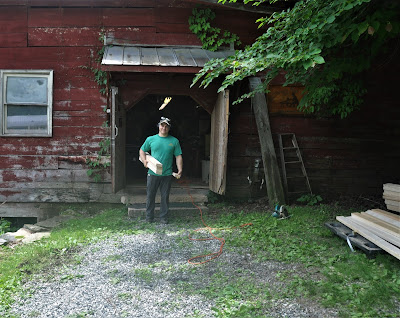 The shop crew did the measuring and cutting for the walls. 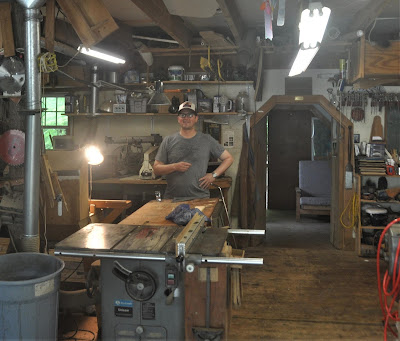 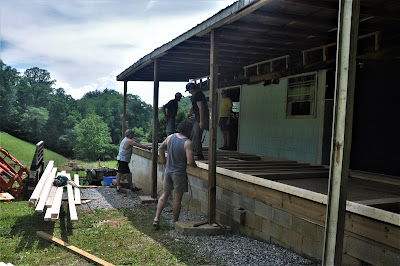 The back wall, assembled and ready to be raised. 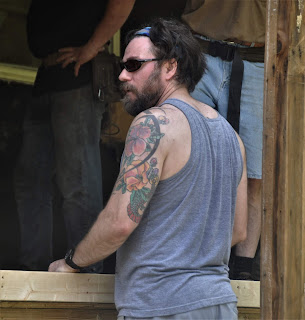 Lots of manpower ready to lift. 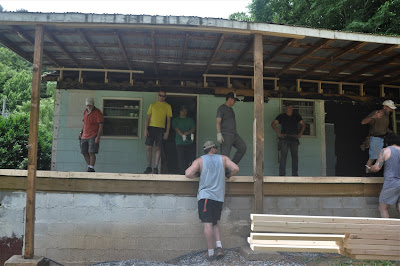 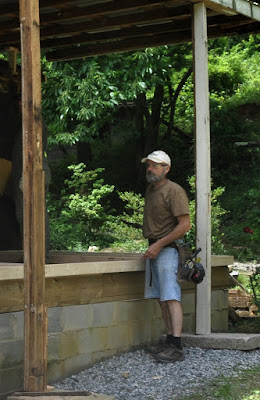 The Boss -- Mark was a student of ours back in Florida and got his start in carpentry and construction when, as a teenager, he helped John build our house back in '75. 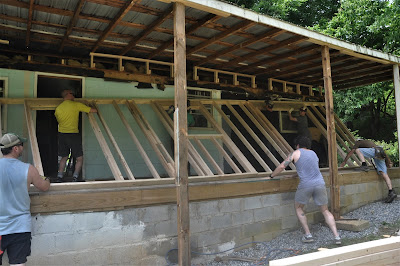 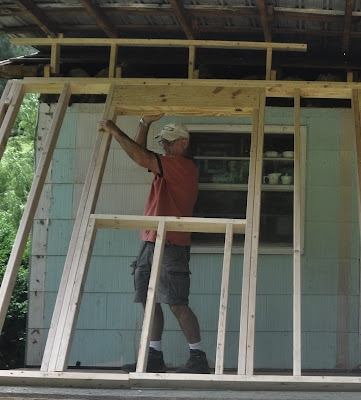 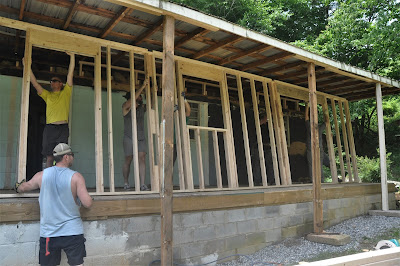 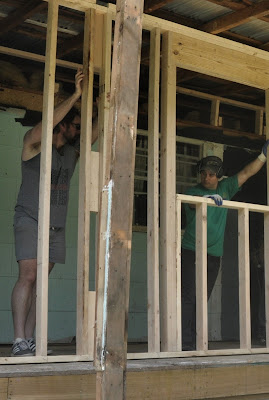 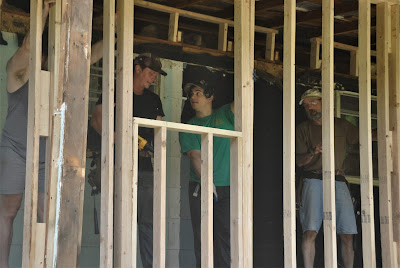 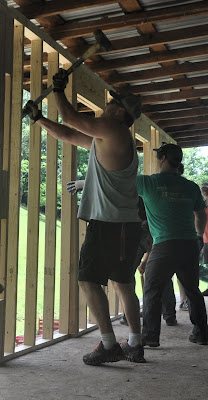 Knocking that wall into place . . . 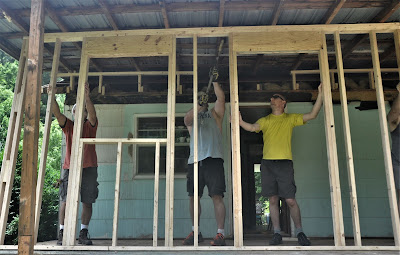 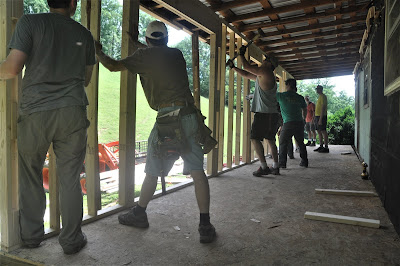 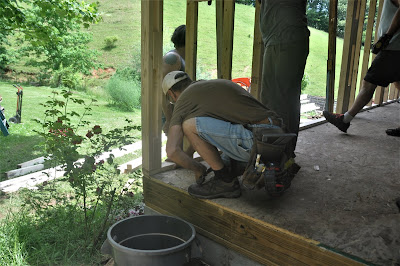 And it's just right! 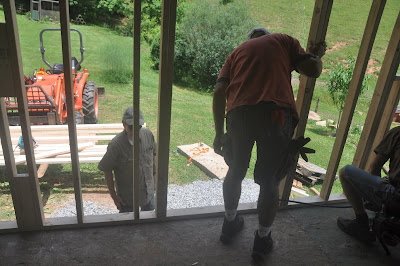 John (the designated gofer) is back from a run to Lowes for more supplies . . . 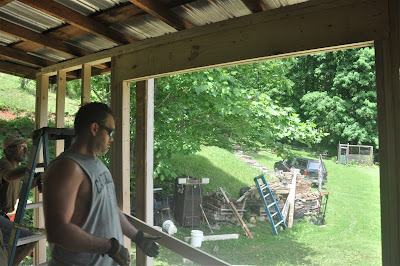 And the guys will take a break for lunch. When I return a few hours later, I'm amazed to see what's been accomplished. 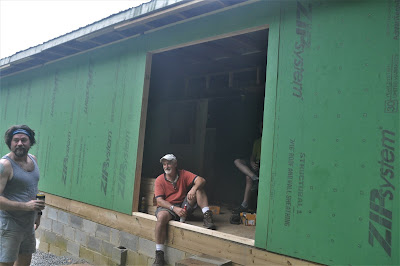 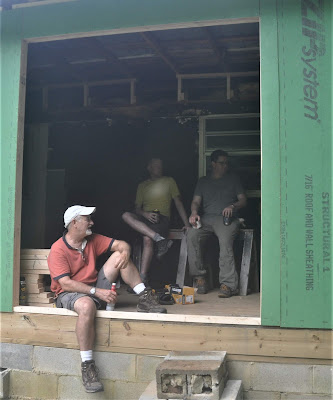 Time for a gloat beer -- time to sit and savor the feeling of accomplishment. 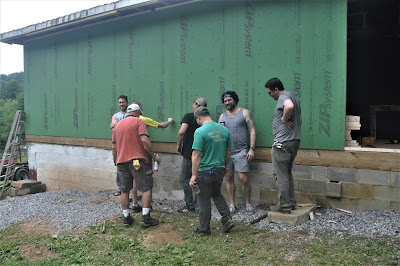 It's suggested that I get a group picture  . . . and with a bit of good-natured grumbling, the guys (Mark has already left, alas) line up. 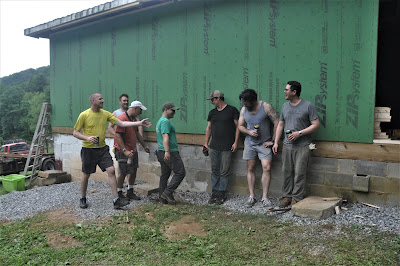 You couldn't ask for better friends than these! 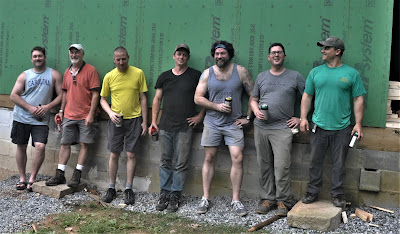 (Note to Josie fans: Josie and Claui were in Arkansas for the weekend, celebrating Claui's sister's birthday. That's why no Josie pics.)

That's neat and impressive and a feel good sort of story.

Excellent carpentry...a skill your husband also has, and passed along to another generation! Good story and I'm sure Josie will appreciate the space when she gets home!

Phew, that was a big job. It looks great and will give SO much more space. Envy, envy. A very enjoyable watch too (wink).

Thank you for this timely story of helping-hands and community and family. I'm such a crotchety hermit these days, easily getting irritated when a neighbor up the road comes down and weed-wacks some of the taller growth in the woods across from our house and road (irritated because I happen to *like* a wilder look around my property and I see this view from our front porch -- even though I know he wasn't doing it just across from us, he was "cleaning up" the roadside). Anyway, this post of yours reminded me that most of our neighbors would pitch in and help us in a heartbeat should the need arise and were we to ask; about half of these neighbors have been here for 25-40 years, while we only moved in 3 years ago. My hermit self needs to lighten up! LOL So ... thanks! :)