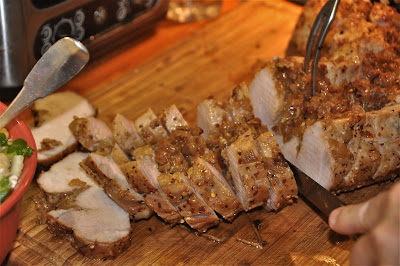 The guys ate well -- there was a feast up at our house on Saturday night and the star of the show was Cory's (the guy, not the cat) Pork Tenderloin with Bacon Marmalade. 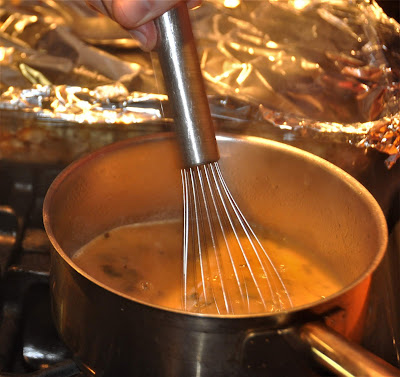 Cory is a terrific cook and often sends me recipes he's invented/ adapted. They are always wonderful and this pork was no exception. 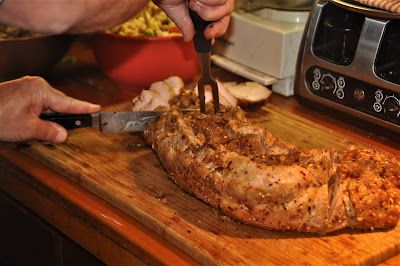 Along with the pork, we had Orzo Salad that Justin made, a delicious "Cheesy" Vegan Cauliflower Bake made by the wife and mother of two of the crew, potato salad, green salad, and garbanzo salad. No one went away hungry. 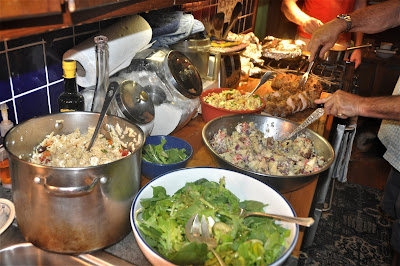 And here, in his own words, is the recipe for Cory's Pork Loin with Bacon Marmalade:

Pork loin, general methodology:
7ish pound whole loin
Split down the middle and salt heavily on all surfaces
Rest in the refrigerator over night - up to 3 days

Bacon marmalade:
-Several big yellow or vidalia onions coarsely chopped
-1 pound of thick cut bacon, most of the fat rendered out in a 300 degree oven (fat reserved)
-caramelize the onions low and slow in some of the bacon fat, adding a bit of apple cider vinegar every 5 minutes or so (about an hour of cooking)
add the cooked bacon in close to the end and add more fat and/or brown sugar, vinegar to tweak the fat/sweet/sour quotient to taste

Back to the roast:
- stuff the dry brined loin with the marmalade and tie up as best you can with butcher's twine
- dry rub the tied up beast with chili powder (i bought dried peppers, toasted them in a skillet and pulverized in a blender.)
-cook at 350 until the thickest part of the loin reaches 130 degrees Fahrenheit, about an hour and 45 in my case, the warm stuffing greatly accelerated cooking time
- take the roast out to rest for 30- 45 minutes and crank the oven to 500 (or fire up the grill)
- put the pan drippings in a sauce pan, add dried oregano, butter and reduce
- broil / grill the beast until crispy on the outside
- rest for 5 minutes, carve, drizzle with the dripping/butter sauce and serve. 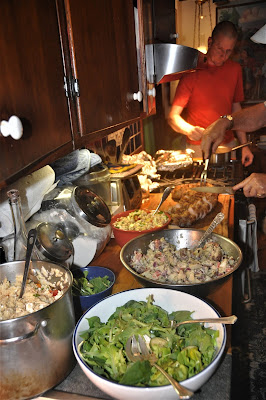 For clarification, this is a whole loin roast rather than a *tenderloin.* the later would be far too small to get this much stuffing into the methodology would otherwise be similar, just a much shorter cooking time.