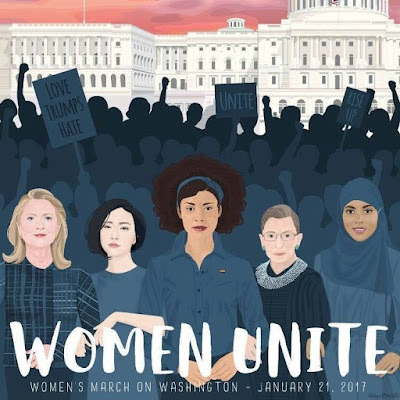 Today it's the turn of those who fought against DT and all that he represents. Thousands of people, not just women, marching -- in DC and in many other cities as well -- marching to proclaim their support for equality.

I think that many are marching too in peaceful protest of the new President's stated agenda, particularly as evidenced in his picks for Cabinet posts -- almost without exception, each nominee is set to wreak havoc in the position -- foxes set to guard chicken houses, destroyers aimed at education, environment, health, housing . . .

Don't tell me to give him a chance (it's not as if I had a choice, is it? ) The sexist, racist, vulgar words of his mouth (not to mention the tweets from his tiny fingers,) the billionaires who supported him and are now reaping their payback with high office, the people he chooses to surround himself with, his propensity to lie, his failure to release his taxes, his love affair with Putin, the egregious conflict of interest with all his businesses, as well as his contemptible treatment of President Obama over the years -- all these things have shown us who this man is.

If some deity chooses to rare back and pass a miracle, turning DT into a wise and compassionate leader for our country, I'll be thrilled.  But I'm not holding my breath.

I wish I were marching. But, not wanting to be the elderly woman who collapsed, I'm marching virtually -- several of my friends are carrying my name in their pockets or on a sign.

The march is just a beginning. All of us who are fearful of what this administration plans to do must stay aware, stay informed, stay on our senators and representatives' phones, expressing our views, agitating against what we believe to be wrong. We must support the journalists out there who still believe in factual reporting and the organizations that represent our beliefs. And we need somehow to reach all those non-voters out there -- to bring them into the process.

It's going to be a long four years.

(The mission, vision and guiding principles of the Women's March on Washington are stated HERE.)
Posted by Vicki Lane at 2:00 AM

There is hardly a skein on bright pink yarn to be had. So much of it was bought to make and give special "pussy" hats (made to resemble a cat's head) that the stores were depleted. Wish I could have joined the group,too.

I believe that we will have three people running our country, none of them the POTUS. DJT will be the entertainer in chief. Mike Pence will head the trio and Mitch McConnell and Paul Ryan will be his right-hand men. Folks in Indiana are a little miffed with God. They prayed to get Pence out of Indiana and this was the answer. Not exactly what they wanted.

NCMountainwoman -- I agree. DT is a big orange meat puppet.

Women have been threatened and insulted by D Trump. I am pleased that so many were in the Women March – marches were also in 70 world countries. It is a good start, but we need to be vigilant for the next 4 years.

A stirring post Vicki. carry on with your virtual march.

You were there in my heart Vicki! Oh you would have loved it. So many clever signs "grab trump by his putin" - little tiny takeouts from this so articulate piece you have written here. Xoxo 💕

Great words Vicki, I stand with you and all women of this world. It is past time to equalize the sexes.

Yup. When you ended with, "And we need somehow to reach all those non-voters out there -- to bring them into the process," that struck me particularly. I am shocked repeatedly when I realize that only about half of Americans vote…I just cannot comprehend this, it's even more perplexing to me than the people who voted for DT. :(