A History and a Story 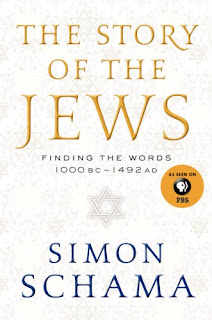 Schama's ambitious tracing of Judaism from its beginnings (about 1000 BCE ) to 1492 is a marvel -- full of incident and specifics that make the past lively. Take for example the wonderful description of the trousseau of a mid-12th century Jewish bride in Egypt -"six white robes, three cloud blue, three blue and gold, one pomegranate red, three pearl-colored, two ash grey, two deep green, and two saffron." And all this for a bride "of average means."

The book is dense with archaeological finds, deciphered shards and papyri, as well as historical documents from medieval England, Germany, Portugal, North Africa, - anywhere that the Jews of the Diaspora found themselves and made communities. The thread that binds the history together is the devotion to words -- spoken or written. The Talmud and the Commentaries and any amount of poetry and the words of the people themselves -- all these give testimony to the rich heritage of Judaism.

And what a history it is! The atrocities and pogroms over the centuries are given full attention -- a disgraceful story and I'll never think of St. John Chrysostom in a kindly way again -- 'golden-tongued' indeed!

But there's so much more! The philosophical and cultural push and pull  between Judaism, Christianity, and Islam over the years, as well as Jews as hired mercenaries, Jews as traders on the Silk Road, Jews in Moorish Spain honored as physicians, Jews in Medieval England protected by the monarch -- in exchange for the protection money that funded the Crusades. So much I didn't know or only knew from novels.

I especially enjoyed reading about the "vast  Jewish kingdom lying on the high grasslands of western Asia, watered by the lower Volga, bordered by the Caspian Sea to the east, the Black ... Sea to the west, and the Caucasus Mountains to the north. All of Crimea and apparently the city of Kiev lay in its power." This would have been around 978.

I chortled when I read this because I'd first heard of the Land of The Khazars when I read Chabon's Gentlemen of the Road
in which two Jewish mercenaries/swashbucklers come to the aid of the heir to the Khazar kingdom -- I thought it was all make-believe till I read Chabon's comment that he was inspired, on learning of Khazria, by the thought of 'Jews with swords.'

Now I have to reread both these books. The first, because it is so very full of information that I more or less skimmed through, alighting at the tastiest bits. And the second, because what I learned from the first will, no doubt, enhance my enjoyment. 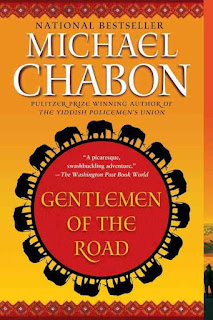 OOh goodie! More great historical books, both factual and novel! I can hardly wait. For now I'm listening to the fiction of Faye Kellerman about more modern Jews who are involved in detectives and homicide. I love having the free digital library of Buncombe County on Over Drive, though it doesn't always have the most recent titles.