Heartfelt Thanks to the Guy in the Kitchen

For the first forty-odd years of our married life my husband John mostly stayed out of the kitchen except for making really good biscuits from scratch on the occasional Sunday morning. He was always in charge of outdoor grilling but that was pretty much it as far a cooking went. Some years back, when I was incapacitated with a ruptured disk and had to have back surgery, to my surprise he casually began to turn out meal after delicious meal as if he'd been doing it forever. But eventually my back healed and John laid down his spatula and sauce pans.

Then, when I began teaching a series of writing classes that took me into Asheville one night a week, John began to make pizza -- from scratch, in the oven on a baking stone, with an ever-changing array of toppings. He's gotten really, really good at it. The crust is thin and crispy -- tonight's toppings included spinach, grilled chicken, mushrooms, peppers, gorgonzola, havarti, smoked mozzarella -- oh boy, this is gourmet stuff! 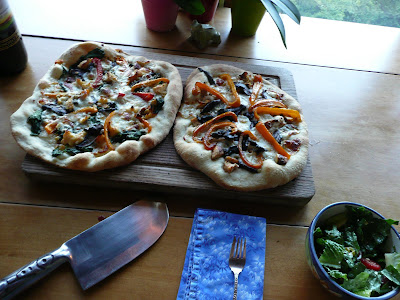 On Mother's Day John surprised me with a delectable Full English breakfast of the sort we enjoyed on our walking tour in the Cotswolds --sausage, poached egg (beautifully poached -- something I've never been able to manage; mine always look all raggedy), grilled tomato and mushrooms, toast, potatoes, strawberries -- and there was champagne. 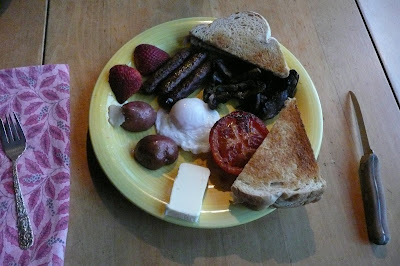 There's been a discussion recently on one of the mystery writers' lists I follow -- the topic How Supportive is your Spouse ? There seem to be a number of ways in which different husbands or wives express support for the writer in the family, from organizing newsletters to accosting strangers at the door in bookstores and handing out business cards to acting as driver to various events.

Would your hubby be willing to share his pizza dough recipe? It looks really good and your description has my mouth watering. YUM!!!

This is where he got the recipe for the dough -- really thorough instructions.

and this is where he got the pizza stone he uses, after trying cheaper ones that broke all too easily. (He's just gotten a second stone so he can make two pizza at once!)

Many thanks ... I'm checking both sites out.