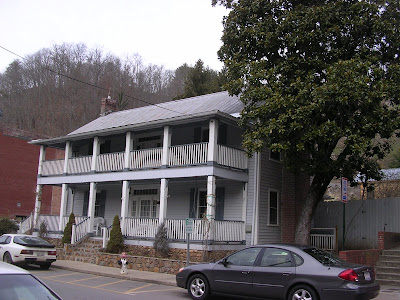 Fifty armed and desperate men from the community of Shelton Laurel  enter the town of Marshall in search of the essential salt which they, as suspected Unionists, had not been allowed to buy. They ransack stores and plunder homes -- even pounding up the stairs of Col. Allen's house to rip blankets from the beds of his sick children.

Retaliation is swift; a few days later a troop of Confederate soldiers makes its way to Shelton Laurel in search of the raiders. The result is the Shelton Laurel Massacre, in which 13 men and boys (some as young as 13 and 14; most, if not all, non-participants in the raid) are rounded up and executed. Women, some elderly, are tied to trees and whipped when they will not say where their men are; an infant is laid in the snow in an attempt to force the wretched mother to name the raiders and their hiding places.

Civil war -- brother against brother, neighbor against neighbor. The families of the victims of the massacre knew the killers. And for years, bitter resentment simmered, breaking out now and then in private vengeance. Over a hundred years after the Civil War and the Shelton Laurel Massacre, our county still was known to many as "Bloody Madison."

Do the old feuds and hatreds remain? Probably not -- though I wouldn't presume to say for sure. But the old house endures, new furbished and landscaped, a private home adorning our little town and inflaming the imagination of at least one novelist.

I'll be drawing for a winner tomorrow and posting the name with tomorrow's blog. Leave a comment to get your name in the hat for an early copy of In a Dark Season.