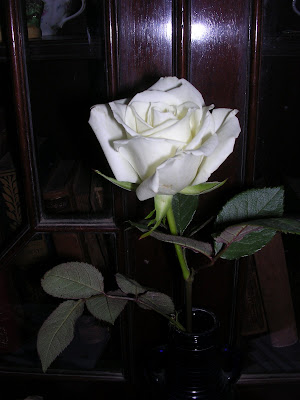 A morning of mundane errands, including delivering our tax materials to the accountant, had left me in a glum mood. I stopped at our local Fresh Market to get a sandwich for lunch and was ridiculously pleased to be handed this lovely rose at the checkout counter. It seems that the custom of lagniappe is still with us.

I'd always thought this was a French word, associating it as I do with New Orleans, but Wikipedia tell me it's Spanish, la napa, derived from yapa in the Quechan language of Peru, where it means 'something added.' Whatever the origin of the word, it's a lovely custom!

Mark Twain writes about lagniappe in Life on the Mississippi:"We picked up one excellent word — a word worth travelling to New Orleans to get; a nice limber, expressive, handy word — "lagniappe." They pronounce it lanny-yap. It is Spanish — so they said. We discovered it at the head of a column of odds and ends in the Picayune, the first day; heard twenty people use it the second; inquired what it meant the third; adopted it and got facility in swinging it the fourth. It has a restricted meaning, but I think the people spread it out a little when they choose. It is the equivalent of the thirteenth roll in a "baker's dozen." It is something thrown in, gratis, for good measure. The custom originated in the Spanish quarter of the city. When a child or a servant buys something in a shop — or even the mayor or the governor, for aught I know — he finishes the operation by saying — "Give me something for lagniappe." The shopman always responds; gives the child a bit of licorice -root, gives the servant a cheap cigar or a spool of thread, gives the governor — I don't know what he gives the governor; support, likely. When you are invited to drink, and this does occur now and then in New Orleans — and you say, "What, again? — no, I've had enough;" the other party says, "But just this one time more — this is for lagniappe." When the beau perceives that he is stacking his compliments a trifle too high, and sees by the young lady's countenance that the edifice would have been better with the top compliment left off, he puts his "I beg pardon — no harm intended," into the briefer form of "Oh, that's for lagniappe."

And I think, in the broader sense of lagniappe, I'm going to have a drawing for a copy of In a Dark Season, when I receive my author's copies a little before May 20. If you leave a comment on my blog, beginning today, I'll put your name in the hat -- no more than once a day though, and on March 31, I, or a trustworthy associate will draw the name of the recipient of an early copy of book four. (This replaces an earlier, less wieldy contest. Love the edit capability on this blog!)

I love the idea of Lagniappe...and I love contests. Ha--so add me name to the pot, please. It is so pleasant to get an unexpected extra in this world of what seems mostly taking. Making someones day can be such a small thing, but its beautiful. Thanks again!
Tammy