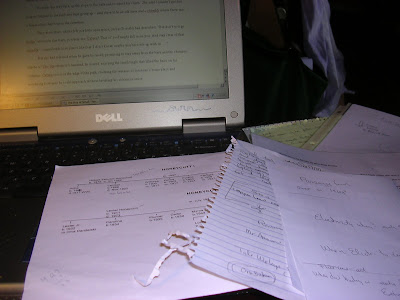 Just read a wonderful post on Laurie King's blog http://laurierking.com/wp.php in which she says that the first draft of her work in progress is complete --it has "a beginning, a muddle, and an end." Not a typo -- but a very recognizable mile post in the marathon of writing a novel.

Here I am in the 'muddle' of my own WIP -- trying to keep straight all those dates and prior references so I don't contradict myself; trying to rachet up the action without giving away too much, too soon; trying to lay down some false clues for the entertainment of the reader -- while all the time playing fair, of course; and trying to see exactly who Miss Birdie is, both from her own point of view as well as through other eyes for a fully rounded picture.

I mentioned already, back on February 6, how this character Myrna Lou suddenly emerged out of nowhere. Well, in the past few days, Calven, the boy who Dorothy 'adopts' in Old Wounds, has insisted on a voice of his own and I've had to go back and insert an early chapter. Law, but these strong-willed characters do seem to have minds of their own.

Remember -- Each time you put a comment on any of my posts from 3/5 to 3/30,you'll be entered (only one entry per day) for a drawing for an early copy of In a Dark Season.
I'll name the winner on my March 31 post, so check back then!

HA!!! That is a word that I have used for quite a while cuz I am always in 'the muddle' of something, but in my case I never seem to get to 'the end'.

Dear Anonymous, Thanks to you (and to you too, Pat) for the post and for the kind words.

If you'd like to be put in the drawing, I'll need a more identifiable name XYZ in Timbuctoo or The Cat Lover or anything of the sort would work! :-)

I can appreciate the "muddle." Looking forward to your latest.

LoL.... in the muddle of something describes my life most of the time!

Oh, and I have read THE SALMON OF DOUBT. I don't listen to too many books because I just don't have the opportunity.

I'm starting at the beginning with your books, but would love to have the latest when it comes out. It won't take me long to catch up I imagine. Thanks for offering a pre-publication copy!

I too, would like to be entered in the drawing for an advance copy of your book. And I love "the muddle" -- "pat in tn" and I must be soul sisters!

"Muddle" has some family humor attached to it. When our oldest was maybe 4 or 5 and his younger sister was gleefully stomping through puddles after a rain. Andrew ran into to the house to tattle that Bethany was "in the muddles!" When asked about it, he said,"well, they're muddy and they're puddles...so muddles."

Vicki, I've very much enjoyed your books, feeling that I've made some new friends. I don't keep every book I buy and read, only those with characters I know I'll want to revisit, and yours are definitely in that category!
I'm looking forward to the new one, and am so glad some folks on DorothyL mentioned and recommended your books!

Thanks to all of you for the comments! And, Caryn, I love the mud puddle muddle! We too have some great 'family words' - I imagine every family does. Margaret -- thanks for the kind words re the books. I'm honored to be on your Keep for Re-reading list!

Thanks for "muddling through" to get past that troublesome midpoint in the creative process. Thanks too for the many pictures on your blog site. We come to NC at least once a year to drink in the mountains; your pictures give me a sip of them more often.

Thanks, Lynne! I love taking pictures and am happy to be able to share them this way.

Well lots of uses for that word these days.....just last week I had a fabulous Blood Orange Margarita and the bartender "muddled" some fresh orange in the drink.But most often I am "muddled" about something...lol