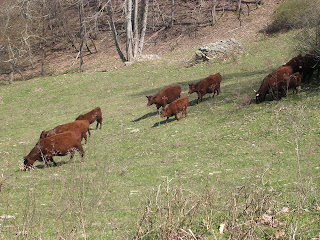 Finally, after a long winter of standing about in a field that had been reduced to mostly dirt and mud (and worse), the cows have been turned into their summer pasture on the mountain. They're like kids on the first day of vacation, trying to do it all -- exploring the boundaries of their new home while eagerly cropping the tender grass. The girls have had plenty of hay all winter -- and if we get a late snow, they'll be back at the gate, bawling to be taken back to the hay ring. And, during the winter, they've had about twenty acres to move around in, generally in search of the sunny spots. But now! They've sixty-some acres of woods and fields to range and any number of fresh green things to munch. The calves are capering and even the old lady cows are kicking up their heels. 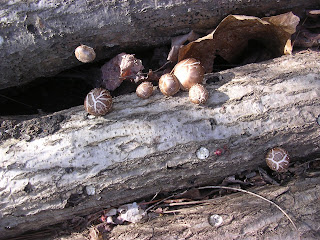 As I was on my way to get a picture of the herd, I was thrilled to notice that our shitake logs were producing once again. Elizabeth has shitake logs(of course!) and like ours, hers are on the way to the pasture. "In the shade by her toolshed, she paused to check the stack of oak logs that Ben had inoculated with mushroom spawn. A lone shitake the size of a silver dollar, its chestnut cap edged with tiny mocha dots, protruded from an upper log. 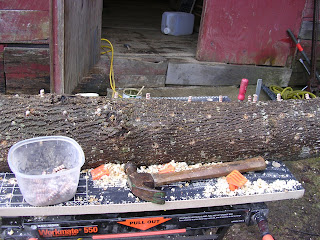 In the real world it's my husband who drills holes in fresh-cut logs and hammers in little pegs of compressed sawdust and mushroom spawn. The logs that are producing now were inoculated four or five years ago and they've produced a lot of shitakes so far. This year John has branched out and in time we hope to have not only shitakes, but oyster and lion's mane mushrooms as well.

Ben will have to get busy over there in that parallel world!

I never knew shitakes were grown by putting spawn and sawdust in a hole in a log. As the old cliche says, learn something new every day.

I can picture the cows frolicking. Happy spring!