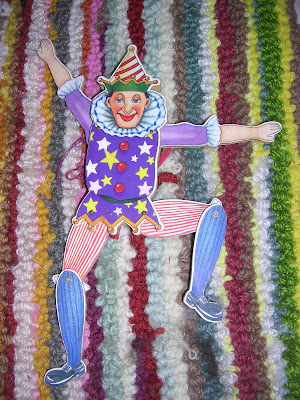 I’ve always been intrigued by the idea of the Fool – whether sacred clown or holy innocent (Miss Birdie’s Cletus was one of these). Often the Fool is an archetypal being who, though seeming simple or deranged, is actually the possessor of deep wisdom. He (or she) is generally perceived as being nearer to the Divine than other mortals. And this is their day – the Feast of All Fools or April Fools’ Day.

There must be something about these early, giddy days of Spring. A quick look around the Internet informs me that quite a few cultures have had festivals that included a good bit of silliness around this time, from the Roman’s suggestively named festival of Hilaria, (commemorating the resurrection of Attis), to the Hindu celebration called Holi, which involves masses of people throwing colored powder and water at each other, to Purim with its costumes and revelry – to name only a few.

I wonder if perhaps the fool is there in all of us, lurking just beneath the surface in some, hidden away and gagged in others, or, in the truly liberated, out of the closet and, like Dylan’s Mr. Tambourine Man, dancing beneath the diamond moon.

The drawing for an early copy of In a Dark Season has been accomplished and Caryn, who left a comment on "The Muddle," is the winner. Caryn, email me at vicki_lane@mtnarea.net and give me your address so I can send you your copy as soon as I get mine – probably a week or two before the release date of May 20.

And, just for lagniappe, I did a second drawing and the winner is Pat Weaver -- and I'll need your address too, Pat.

Stay tuned -- I may take a notion to do this again.